Karl Manke, 77, is perceived as “an immediate threat to the public.” 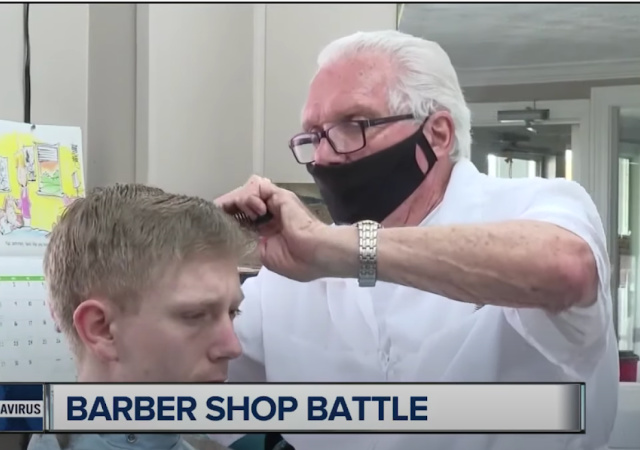 Barber Karl Manke, 77, became a star after he opened his shop in Owosso, MI, on May 4, despite Democratic Gov. Gretchen Whitmer’s shutdown orders. He faced a “90-day misdemeanor and/or a $500 fine.”

The state requested “a temporary restraining order” because officials considered him “an immediate threat to the public.”

I think people forget that salons and barbershops are sterile even without the risk of coronavirus. Manke even wore a mask, sanitized his tools with ultraviolet light, and followed basic common sense sanitary rules (emphasis mine):

“I don’t need the governor to be my mother,” Manke told the Flint Journal. “I have one. God bless her, she’s gone now. I don’t need another mother. I can make these adult decisions myself.”

Manke said money has been tight since the shutdown and he can no longer afford to stay closed. Even with the potential consequences, the 77-year-old said he plans on keeping his doors opens.

“Heavens yes, I’m staying open unless they take me out in handcuffs or Taser me,” he told the paper. “I’ll be open until Jesus walks in or until they arrest me.”

Attorney General Dana Nessel said the government must “take action to protect the public and do our part to help save lives.”

Manke can still cut hair until officials serve him the suspension. He has not received it yet, but he and his lawyer Dave Kallman received notification of said suspension.

Kallman called the suspension “an abuse of power,” “totally vindictive,” “petty,” and “totally in retribution because they didn’t like the court order from earlier this week.”

Manke said on Sunday: “Obviously she [Whitmer] has no concept at all, the damage that she’s doing to our state and to families.”

I think the big question here is when does the actions get to the point where sovereign immunity no longer applies?

Another reason why State licensing of hair stylists, manicurists, pedicurists, etc. is a stupid custom

Nail salons actually do cause disease and other risks. Many rely on Chinese products and workers, plus there’s all the risk of fungal infections etc

Yes, but that’s a reason to require health standards, and possibly inspections, not licensing as such.

Without a license..how are they getting inspected?

Not in the least. The infections that can be caused by a untrained barber or stylist is shocking. That’s why they are trained in sanitizing . Their shops are probably cleaner than most locations.

Welcome to life in a Police State. The former United States of America.

No doubt. “That’s a mighty fine career. Be a shame if someone to took away your ability to earn a living.”

Trump should hire him as his personal barber, hint, hint.

As I understand it… he can’t get unemployment. Just one more bit of collateral damage on the way to utopia.

I still wonder about the degree of coordination among Dems and the DNC/Central Committee as to how to wreck the economy of the country. If there is a provable conspiracy then I hope this is grounds for sedition.

notamemberofanyorganizedpolicital in reply to alaskabob. | May 14, 2020 at 3:20 pm

They have spent Millions each year hobnobbing and networking at conferences. So course it’s all coordinated. They’re guilty of groupthink!

He was likely self employed all his life and not eligible for SS..

Abuse power too outrageously, and you lose any veneer of political or moral legitimacy. You can lose other things, too, as King Louis discovered. Of course, in America we hope that it doesn’t come to that, but events can spin out of control.

You know if all the barber shops opened up it would send a good message to go screw themselves.

Does the state actually have solid facts that cutting hair spreads the virus. I bet not.

This is not going to end good for the Michigan Governor or the AG. I sure hope that violence is avoided, but she is sure trying to create a confrontation.

Too bad she is not spending her time fix road instead and doing something useful.

In Utah, the roads are all getting redone. Road construction didn’t stop with the stay-at-home. I guess our PTB decided that construction crews outside were a pretty safe occupation, and bonus – no one was driving on the roads!

Many countries that have shut down still permit barbers and hair salons to operate. It doesn’t seem to have caused any virus outbreaks.

No one is being forced to visit this guys shop, he himself is masked, he uses all standard sanitizing methods barbers already used before Hunan Plague, plus he’s added UV sterilization.

The problem isn’t that he’s some Typhoid Mary, the problem is that petty officials wielding petty power get their noses bent out of shape when the public doesn’t comply to whatever nonsense they proclaim.

Licensing usually has some logical pretext, but eventually may become illogical and against the public interest. Tree removal licenses serve mainly as an excuse for local gov’t to get fees. Electrician licenses make sense in general, but in practice serve mainly to limit competition and increase the income of those already holding licenses. Sane often for taxi licenses.

Well Mark, she did say she was going to fix the “damn” roads. Lied about not wanting an increase in the gas tax at the debate.
About a month in she went to the heavily rino repub legislature for a 45 cent increase in the gas tax. They said no.
So she went to her highway head and had them get a 300 million or so dollar loan to cover the roads. Which means the grandkids get to pay for it.
Just like our kid governor of 1980 Jim Blanchard who when running for governor said he wouldn’t raise taxes to cover the deficit from the Carter blunder (don’t bother with wiki, his bio was written by fans).
So after a month of being in office he proclaimed he’d looked over EVERAHTHING and had to get an income tax raise to balance the budget.
Like all politicians, he never looked at cutting the snot out of government. Also by doing so in his first year he knew that the stupid Michiganians would forget about it by the time the next election rolled around – which they did and re elected him.
The evil bitch is a “My Way or you go to prison then get shot” kind of bitch.

The point of living in a Constitutional Republic is that citizens like you and I are empowered to regulate the powergrab of State Regulators and strip THEIR license when they cross the line.

All these occupational licenses were initially pushed through the legislatures by the existing practitioners to limit competition.

Regulators (as opposed to legislators) are largely unelected.

In any event, the word today moves so fast that an opportunity to “unelect” insane violators of your rights only every four to six years is tantamount to having no feedback loop at all.

“I’ve never seen it used this way, ever,” said Kallman. “It’s usually saved for situations if you have doctors doing bogus cancer treatments or you have a sex offender living at a daycare center. We don’t have that here.”

He argued the two points made by LARA for the summary suspension order — violation of the executive order and criminal charges — are those which have been created of late by Whitmer and ones Kallman has called illegal and unlawful as they come without the backing of state lawmakers who declined to extend the state of emergency beyond April 30.

Did a court actually issue a TRO, or did the governor just ask for one? What’s the status of the restraining order?

Generally when a court hands down a TRO you obey the court. But an executive order isn’t the same thing.

Wish I lived closer to Flint. I could use a haircut.

If Trump needs a trim, he could invite the guy to the Whitehouse, on behalf of hatemongering Wretched Gretchen Whipper.

I checked the Michigan and county stats pages.

The zipcode data shows that Owasso has only 73 cases of C19.

Definitely an overreach of power.

“Obviously she [Whitmer] has no concept at all, the damage that she’s doing to our state and to families.”

This would go directly against the court’s order because the specified he be allowed to practice. In this instance I wonder if the State may be found in contempt.

POTUS needs to invite this man to the GOP nominating convention, ASAP, as a keynote speaker and guest of honor.

A perfect representation of the fact that the vile and totalitarian Dhimmi-crats do all that they can to crush working men and women and solo entrepreneurs and business owners under their bootheel, despite all their phony posturing and rhetoric about allegedly advocating for the “middle class.”

One of the official organs of higher ed, Inside Higher Ed., already published an article making it clear – reading very little between the lines – that colleges are keeping campuses closed this fall.

The colleges are talking a big game because they want students to pay tuition this May already.

State Police ‘Monitoring All of the Conversations’ of Capitol Protesters

dmacleo in reply to notamemberofanyorganizedpolicital. | May 15, 2020 at 8:18 am

One more example of why Whitmer is unfit to be a Governor. When are you Michigan voters going to get on the ball and recall this tyrant?

There are many black barbers in Detroit and Flint that are continuing to cut hair but she dare not send police to shut them down.

Sounds like “breach of due process” and “conspiracy to commit Civil Rights Violations” to me!

Manke said on Sunday: “Obviously she [Whitmer] has no concept at all, the damage that she’s doing to our state and to families.”

On the contrary, Whitmer and the other Communist – er, I mean Democrat – governors are focused on causing maximum pain and damage to the economy and the citizens of their states, and then those same governors, along with the Leftist media, will blame Mr. Trump for all the damage that has taken place. This is all about stealing the election in November.

“Manke can still cut hair until officials serve him the suspension.”

Manke can still cut hair afterwards; as well, and if I lived near him, I’d be sure to give him every opportunity to cut mine. At which point Manke can put a call in to the Institute for Justice, who will carefully measure Whitmer for the brand new orifice she dearly needs to be drilled. Not only is IJ expert at destroying senseless professional licensing requirements, they are now also focusing on attacking the entire concept of governmental employee immunity. Getting IJ involved in this kerfuffle would indeed be bringing a very big gun to a gunfight.