Merkel: “We are following a bold path.” 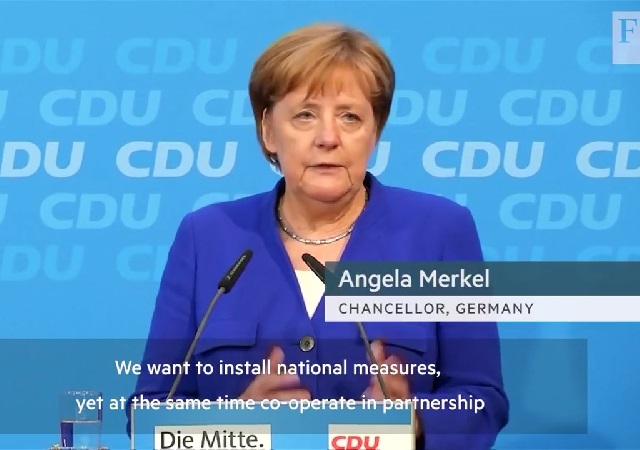 Germany is moving ahead with “bold” measures to phase out the Wuhan coronavirus lockdown, Chancellor Angela Merkel announced on Wednesday. The country was “following a bold path” in lifting nationwide restrictions in place for more than seven weeks, she said.

The announcement comes as Germany registers a decline in the new cases of coronavirus virus despite the easing of lockdown measures.

Facing pressure from regional politicians calling for further easing, Chancellor Merkel passed on the decision of lifting the lockdown over to the states, the German media reported.

“States can reopen all shops, regardless of their size,” Berlin-based Der Tagesspiegel newspaper reported. “States must themselves decide on the gradual opening of the gastronomy sector.”

The relaxing of restrictions is in keeping with the “exit plan” announced by Merkel in mid-April. Germany re-opened small shops and non-essential businesses following the Easter weekend. The shoppers are required to wear protective masks and keep a 1.5-meter distance from one another. So far, Germany reported 6,993 deaths and around 167,000 cases of the virus, which first appeared in central China late last year.

Chancellor Angela Merkel said Germany had gone through ”the very first phase” of the pandemic and announced further easing of lockdown measures. Merkel met with the leaders of the federal states to determine the next steps.

“We are following a bold path,” said Merkel. “We can afford to be a bit bold but we must remain cautious.”

The country is now at a point “where we can say that we have reached the goal of slowing down the spread of the virus,” Merkel added.

Social distancing has been slightly eased, with the chancellor saying that members of two separate households can now meet. But she warned Germans not to go further than that, to continue to cover their noses and mouths, and to maintain general physical distancing outside through June 5.

Merkel and state premiers agreed that all shops, regardless of size, will be allowed to reopen. The businesses must, however, adhere to strict hygiene and social distancing measures. States will have the power of discretion on when and whether to reopen restaurants.

Despite the recent easing of social and commercial activities, the reinfection rate in Germany has come down from over 1.0 to 0.65, according to the country’s top public health institute, Robert Koch Institute (RKI). This means that from 100 people tested positive for the virus, 65 others will be infected further, thus pointing to an incremental decrease in new cases.

The lowering of the reinfection rate to below 1.0 had a hand in the German government’s decision.

“Germany has identified a rate below 1.0 as the key indicator of whether life can return to normal, although Merkel says lockdown measures could be re-imposed at a local level if necessary,” UK’s Daily Mail noted.

With the pandemic hitting German exports, the country is set to face the ‘worst’ recession in its recent history, Economy Minister Peter Altmaier warned last week. The German gross domestic product (GDP) could shrink by 6.3 percent, the most significant drop since authorities “began keeping records” in the 1970s, media reports suggested.

With the coronavirus leaving behind the trail of death and economic devastation, the anger, even in Germany, is growing against Beijing’s handling on the pandemic. German newspaper Bild noted that an average German could lose 1,784 euros if the German GDP were to fall by 4.2 percent. Based on those calculations, the newspaper demanded reparations from China to the tune of $149 billion. The paper was responding to Beijing’s criticism of its news coverage sharply critical of Communist China’s handling of the outbreak.

“You are endangering the world,” Julian Reichelt, Bild‘s editor-in-chief, responded to Beijing in an open letter on April 14. “The reason China does not innovate and invent is that you don’t let the young people in your country think freely. China’s greatest export hit (that nobody wanted to have, but which has nevertheless gone around the world) is Corona,” he retorted.

BBC: ‘Churches, shops  and museums to reopen in Germany’ (May 5)

after the uprising, we can boldly resend the lockdown.

It’s bold for her to look in the mirror and still face the public every day.

It’s going to drop everywhere. Everyone (nearly) has been exposed to it. Given how fast this thing seems to spread, there seems to be an entire group of people that no is talking about – those that simply don’t react to the virus at all. Could be cross immunity from previous coronavirus exposure (how “novel” is it really??) or ,maybe some people are not serologically sensistive to it for factors and reasons we do not understand.

I keep returning the cruise ship – no way 100% of those passengers were not exposed at multiple points – yet a huge number never tested positive.

Same with the Roosevelt. And their quarters are a damned sight more cramped than on a cruise ship.

queue up the embolden kraut memes….

“States can reopen all shops, regardless of their size,” Berlin-based Der Tagesspiegel newspaper reported. “States must themselves decide on the gradual opening of the gastronomy sector.”

I have to believe the “gastronomy sector” are inclusive of restaurants and bars/pubs. The one aspect which is the 2nd biggest infringement of the lockdown next to being employed.

One would have to be bold to follow that woman anywhere. I certainly wouldn’t have the stomach to do so.