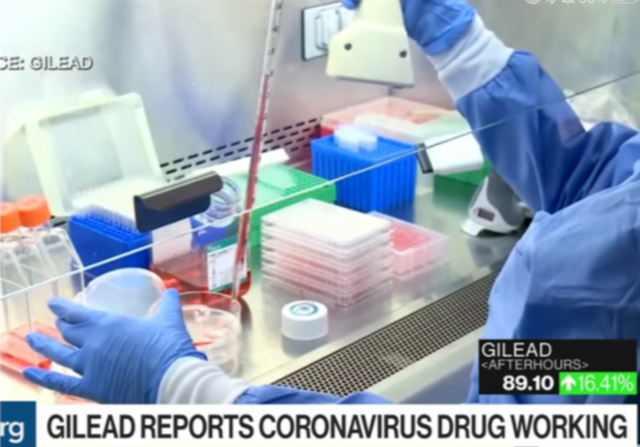 Hackers with links to Iran have targeted a U.S. drugmaker working on a potential coronavirus treatment, Reuters news agency reported on Friday. The US drugmaker Gilead Sciences, whose antiviral drug remdesivir has shown promising results in treating coronavirus patients, came repeatedly under cyber attack from servers based in Iran in recent weeks, media reports reveal.

Gilead’s antiviral drug “remdesivir is the only treatment that has been shown to have even a potential effect on the disease,” the USA Today reported on April 30. The company, based in Foster City, California, is on the verge of rolling out a coronavirus treatment for general use. The U.S. Food and Drug Administration (FDA) has already authorized the use of the drug in case of seriously ill patients, bringing it a step closer to full approval.

Iran-linked hackers tried to “compromise staff email accounts by using messages that impersonated journalists,” Reuters reported. The attempted breach were discovered by analysts from the Israeli cybersecurity firm ClearSky, who traced the web domains and serves used by the hackers back to Iran. The latest Iranian cyber attack is part of a “growing trend in which state-backed hackers have been gathering intelligence related to coronavirus and a possible treatment,” the Forbes Magazine noted.

Hackers linked to Iran have targeted staff at U.S. drugmaker Gilead Sciences Inc in recent weeks, according to publicly-available web archives reviewed by Reuters and three cybersecurity researchers, as the company races to deploy a treatment for the COVID-19 virus.

In one case, a fake email login page designed to steal passwords was sent in April to a top Gilead executive involved in legal and corporate affairs, according to an archived version on a website used to scan for malicious web addresses. Reuters was not able to determine whether the attack was successful.

Ohad Zaidenberg, lead intelligence researcher at Israeli cybersecurity firm ClearSky, who closely tracks Iranian hacking activity and has investigated the attacks, said the attempt was part of an effort by an Iranian group to compromise email accounts of staff at the company using messages that impersonated journalists.

Two other cybersecurity researchers, who were not authorized to speak publicly about their analysis, confirmed that the web domains and hosting servers used in the hacking attempts were linked to Iran. (…)

Britain and the United States warned this week that state-backed hackers are attacking pharmaceutical companies and research institutions working on treatments for the new disease.

The joint statement did not name any of the attacked organizations, but two people familiar with the matter said one of the targets was Gilead, whose antiviral drug remdesivir is the only treatment so far proven to help patients infected with COVID-19.

The United States is leading the world in finding a cure for the contagion which first appeared in central China late last year. “We are very confident that we’re going to have a vaccine… by the end of the year,” President Donald Trump said at a town hall meeting last Sunday. Israel and the European countries are also working towards developing a vaccine and cure for the virus.

Communist China, which first tried to cover up the outbreak in Wuhan city, turned down a European offer to jointly work on a treatment and research. In response to an EU-led request for assistance, Beijing refused to “make any successful vaccine [developed by Chinese researchers] a common public good,” the South China Morning Post newspaper reported on May 5.

The hacker attack on the U.S. drugmaker comes at a time when Tehran is expanding its cyber capabilities. Iran’s Islamic Revolutionary Guards Corps (IRGC), regime’s armed wing, placed its first military satellite into orbit last month. The Shia-Islamic regime has been ramping up its technological capabilities with Chinese and North Korean help.

Tehran has been at the forefront of spreading Chinese disinformation about the Coronavirus pandemic. Echoing Beijing’s propaganda, Iran’s Supreme Leader Ayatollah Khamenei accused the U.S. of creating the Wuhan Coronavirus. The Wuhan virus was “specifically built for Iran using the genetic data of Iranians,” Khamenei, who is the spiritual leader of close to 200 million Shia Muslim’s worldwide, said in a bizarre rant on March 22. The Iranian leader was referring to a similar claim made by Chinese Foreign Ministry spokesman Zhao Lijian, who suggested that U.S. military may have planted the deadly virus in central China.

“remdesivir is the only treatment”

The push for the not-so-effective, but fully patented medication continues.

notamemberofanyorganizedpolicital in reply to Exiliado. | May 9, 2020 at 2:38 pm

It’s all rigged and crooked!

You don’t have to take it. Just mix up something in your kitchen sink, since you obviously know biology better than every bio-scientist.

Surely there’s a latin name for the above fallacy if sincere; rhetorical technique if used rhetorically.

In this example, one doesn’t have to make a car in the garage to have a valid observation about cars … or more than one.

notamemberofanyorganizedpolicital in reply to BierceAmbrose. | May 9, 2020 at 9:03 pm

notamemberofanyorganizedpolicital in reply to BierceAmbrose. | May 9, 2020 at 9:06 pm

Sorry it may be pedo Cletus.

Pedo flatus, that is after autocorrect gassed itself.

Directional “anecdotal” studies show success with other drugs … not being pushed through the pipeline.

Serum levels of Zinc, and Vitamin D show directional and better success with illenss after exposure, course of the disease, and motality … warrenting further study, perhaps.

If we had a CIA with any competence at all those server farms would all of a sudden stop working. If we had a masterful CIA the coders would suddenly stop working as well…

Forgive me, I should have clarified: Iranian server farms and Iranian coders.

Maybe we can call on our friends, the Israelis. This is right in their wheelhouse.

(Was it the name “Gilead” that triggered the mullahs?)

Maybe we can call on our friends, the Israelis. This is right in their wheelhouse.

(Was it the name “Gilead” that triggered the mullahs?)

New England Journal of Medicine published a study that at least said HCQ does no harm in seriously sick patients. But made no difference in death rates.

Remdesivir also made no difference in death rates.

Perhaps we’ll someday get a study of whether they help people who are not in intensive care.

I keep reading that, but don’t hear ay authoritative confirmation.

It is being tried all over the world, so I don’t think any one country can suppress it.

The stories old by survivors who were treated with it and experienced a turnaround are compelling.

Currently, this treatment has a 91% global success rate. The MSM is going out of their way to not speak of this because our President touted its effectiveness.

People also recovered without it.

And, the more these totalitarian, perpetual bad actor states engage in belligerent activities and machinations against the U.S. and other nations, the more the vile Dhimmi-crats embrace them.

And at $1000.00 or more per shot (multiple shots needed for treatment) remdesivir is going to be very profitable for both Gilead and those Congress people who have managed to buy Gilead stock on the quiet side. Guaranteed.

Congress doesn’t need to do it quietly, Congress is exempt from insider trading law.

We invest billions in cruise missiles. Use them!