FBI: Shooting at Corpus Christi Naval Base is “Terrorism-Related”

FBI: Shooting at Corpus Christi Naval Base is “Terrorism-Related” 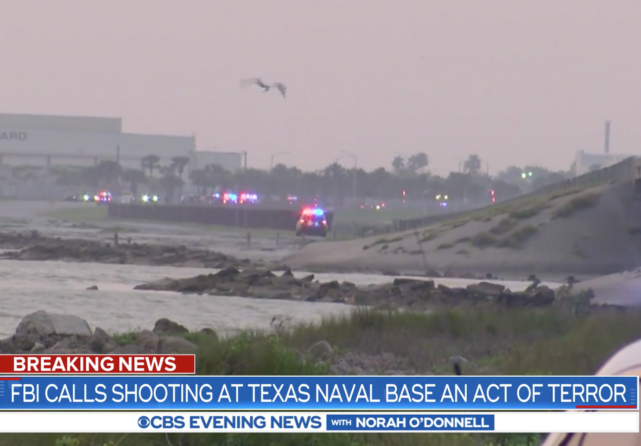 Thursday, Adam Alsahli crashed through a security gate and opened fire at Naval Air Station Corpus Christi. He wounded one sailor before security shot and killed him.

Later, the FBI said they believe the attack was “terrorism-related.”

More from the APAP:

A shooting at a Texas naval air station that wounded a sailor and left the gunman dead early Thursday was being investigated as “terrorism-related,” the FBI said, but divulged few details as to why.

The suspect was identified as Adam Alsahli of Corpus Christi, according to three officials familiar with the investigation who were not authorized to speak publicly and spoke to The Associated Press on condition of anonymity.

At about 6:15 a.m., the gunman tried to speed through a security gate at Naval Air Station Corpus Christi, opening fire and wounding the sailor, a member of base security, U.S. officials told the AP. But she was able to roll over and hit the switch that raised a barrier, preventing the man from getting onto the base, the officials said.

Other security personnel shot and killed the man.

There was an initial concern that he may have an explosive device, but Navy experts swept the area and the car and found nothing. The officials spoke on condition of anonymity to discuss details about an ongoing investigation. Officials were still working to process the crime scene late into the day and had recovered some type of electronic media.

Later, federal agents were seen carrying items from inside a house that a Corpus Christi police tactical unit had surrounded and a public records search by local television station KRIS indicated was Alsahli’s last known address. A police spokesman would not confirm that the activity was related to the shooting at the Naval station.

…FBI Supervisory Senior Resident Agent Leah Greeves said at a news conference that investigators were working to determine whether a second person of interest was at large but did not elaborate. She also would not discuss a potential motive or specify what led investigators to believe the shooting was related to terrorism.

“We have determined that the incident this morning at the Naval Air Station Corpus Christi is terrorism related,” Greeves said. “We are working diligently with our state, local and federal partners on this investigation, which is fluid and evolving.”

Well, if this is “terrorism related” we know he shouted neither “Allahu Akbar” nor “Death to America” during his attack. We all know either of those guaranteed it’s not terrorism.

If obama had a son…

Islam needs to be treated as a cult, it should be declared such, there should be no nonprofit status. These pricks are not compatible with western civilization. Find a way to expel them.

There is no separation from its political ideology.
Yes, it cannot be tolerated.
How did this man get into the US?

It’s not more a ‘cult’ than any other society, good or bad.

It’s just that it’s bad. We need to keep these people out of our country, or the next thing you know, they’ll be in our government.

Then again, there is obama, rashid tlaib, ilian omar and the like.

It’s kinda late, thanks to obama and clinton’s treason.

Our only hope is to take back our schools. Our ONLY hope.

What’s the AP doing carrying the FBI declaring this “terrosism related” in less than 6 months’ investigation?

We don’t wanna be jumping to conclusions.

Wray wasn’t at his desk. He missed quashing the story.

He was probably at lunch with AG Barr-Boehner and sessions.

FBI comes out that quick with “terrorism related.” Is this guy another “known wolfe?” Interesting how even so, they get shots off.

Frankly, I wouldn’t trust the FBI to investigate my missing left sock. The clowns are probably too busy looking for ways to frame Republicans. Screw them all.

That’s not fair. Missing socks are gone forever … unless you lose the other one.

No , it’s Trump Time and the FBI is in enough deep water

The mere fact that wray remains head of the FBI is all you need to know.

Just a disgruntled American angry at the way Trump has handled the Corona Virus response.

“The attack came just days after authorities revealed that a 2019 attack at a Naval Air Station in Pensacola, Florida by a Saudi Air Force Officer was terrorism-related. The delay in revealing that motive came because authorities couldn’t initially access the suspect’s cell phone; they eventually say they discovered he had communicated with al-Qaida“.

Another case of “Aloha Snackbar”, the religion of peace is at it again.

Every Ramadan… every time! And we just keep letting them into our country, and then everybody acts surprised when this happens.

It is not a religion, just a cult created by a barbarian 1400 years ago to cement his power.

Our last president was one of the barbarians.

GWB did a huge disservice to our country when he called it that.
Imagine if we had not kowtowed then.

The bushes were part of the bush/clinton/bush/obama sewer spill into our government and way of life for 24 years.

They did nothing for our country but weaken it for the taking by the left.

God, I love Texas and my fellow Texans.

Wanna-be mass shooters seem to have a really poor record versus the citizens of The Republic of Texas.

Gee, it’s almost like letting the citizens arm and defend themselves contributes to the safety of society in general.

Who woulda’ thunk it?

Rank and file personnel on base are unarmed by policy. That’s why, along with the political angle, military bases are desirable targets. You could shoot up a movie theater (not these days though), but it wouldn’t make the same political statement.

kudos to the lady sailor who, though injured/wounded, had the presence of mind to roll over and activate the barricade–her actions prevented the terrorist from entering the base and provided a precious bit of time for the defense to converge

I concur, however I wonder about the security arrangement. Shouldn’t there be someone else inside a booth who could activate the barriers? My son goes to work every day at a Naval Air Base.

Does the Islamic religion allow you any virgins after death if you are thwarted by a woman?

I would still like to see a harem cartoon with two ladies sitting in the foreground. One should younger, the other older. The younger one says that she does not want to the lay with those losers, the older one replies that she does not have to worry, that they are less potent in death than in life, and not one of them has been able to deflower any of the virgins.

Pearl Harbor, Pensacola and now Corpus Christi all within a year. Maybe the Navy needs to rethink their security protocols.

You mean from right-wing Christian terrorists?

Something that aids terrorists and others is, if the perpetrator is willing to sacrifice themselves, it is very difficult to stop them initially. This attempt is nearly a best case scenario for the Navy security. The female guard, with protection of a vest, did her best and limited the damage. Brave lady!