Stelter’s smugness and self-importance radiate through his condescending words. 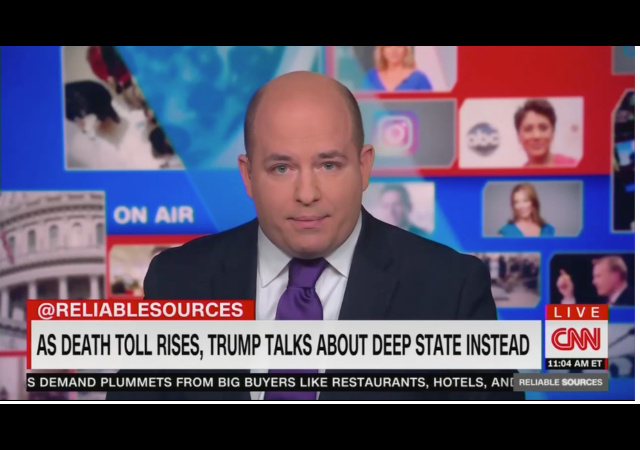 CNN host Brian Stelter lost his damn mind on Sunday’s Reliable Sources because some people in the media had the nerve to report the news not related to the Wuhan coronavirus.

They had the audacity to address the issue that the FBI might have set up former National Security Adviser Michael Flynn. Stelter considered it an “obsession” because nothing can ever top the pandemic!

Stelter delivered his speech atop his soapbox:

“It’s like New Orleans floods every day. It’s like the planes go into the towers every day. And to look away or act like it’s now normal or acceptable is a disgrace to the victims. It’s so disappointing to look at what we’re seeing from right-wing media these days, where there’s such an obsession with the deep state and these revelations about the Russia probe and the decision about Michael Flynn. They’re treating the Michael Flynn story like it’s a bigger deal than the deaths of 2,000 Americans a day.

“We were seeing this on Fox and Friends and other shows. When the president called into Fox and Friends the other morning, Friday morning right before the unemployment rate numbers came out, he talked about the Flynn case for 20 minutes before he was asked about the pandemic. In what right mind is any scandal, any political scandal, any Department of Justice story, more important to ask the President about than the pandemic that’s raging?

“Look, ultimately it’s about news judgment, it’s about lack of judgment, but I find it befuddling that some people are acting like this death toll is just normal, and accepted, and common, and just another day now. Imagine if 1,000 to 2,000 Americans were dying a day from terror attacks? Imagine the president’s response?”

This is precious coming from someone who had his own obsession with the probe into possible collusion between then-presidential candidate Donald Trump’s campaign and Russia.

Weird how people like Stelter dropped the issue once no one could find any collusion and recent reports indicate that House Intelligence Chairman Adam Schiff did not even have a whiff of possible evidence despite him bragging about it.

The Washington Free Beacon released a video of Stelter’s obsession with the Russia probe.

The lack of self-awareness within people like Stelter will always shock me. I just do not get the lack of humility. I do not get the self-importance or the need to feel like they have lecture other people.

Stelter is the perfect mate for Joy Behar. They could give birth to the homonculus of high dudgeon.

I can’t hear you over Kucker demanding his coffee office boy. I thought you said you obsessed over the RUSSIA HOAX.

This idiot is so full of himself that he cannot see how absurd he and his network are. The lack of self-awareness is astonishing! cnn repeats the same stuff 24/7 and he talks about obsessing!

He should team up with Howard Stern. Reminds me of little fat boys that could not throw a baseball and perverts from high school.

I can’t throw a baseball either. And, I’m fat. But, I am certainly not like Stelter.

Chuck Toddler issued a half assed apology, claiming he didn’t watch the entire interview that CBS aired. That is lazy, biased so called journalism at its best. Guess Chuck didn’t have time in the two and a half days between the CBS show and his show to watch another 15 seconds of video.

LOL, what a lazy, bullshit excuse on his part. Barr said EXACTLY what Todd claimed he didn’t say in THE VERY NEXT SENTENCE that Todd edited out.

LOL, moral pandering to his Leftist base. No right-winger by his definition would be watching his silly show.

2.8 million Americans die every year. What have you had to say about the 169,000 who die in accidents, can’t you blame Trump for those too!

Certain Governors who interfered with hospital discharge planning and sent virus patients to nursing homes are responsible for much more of the 1-2,000 deaths per day than anyone else. I don’t think Cuomo has any skin in the game regarding the Russians, he’s just not too smart.

The Friendly Grizzly in reply to notamemberofanyorganizedpolicital. | May 13, 2020 at 1:45 pm

I want one that says, “This is a stickup”.

They believe that reality is a social construct — i.e., something we jointly produce. So in order to shape reality to their liking they *must* control you so you won’t pull it in undesirable directions, which they *know* you’re likely to do because you’re evil [insert appropriate adjective for your particular badthink, e.g. racist, misogynist, capitalist] scum.

The George Costanza evil twin with a face for radio.

Bravo- ya beat me to it!

CNN? Isn’t that the channel you see in airports? The one with the angry faced gay guy with white hair?

Stelter makes a good case against circumcision. The foreskin would have covered that ugly face and made a great gag for his lying mouth.

So, why are people who are so sure, n so wrong, for so long still on the air?

“Move along, nothing to see here.”

Between Mark Dice’s imitation and this putz being the spitting image of Seinfeld character ‘Castanza’, I cannot look at this guy without laughing, let alone listen to him.

On the up side since Stelter works for CNN, and nobody watches CNN, nobody saw this stupid lecture.

I certainly wouldn’t know about it if it wasn’t reported here.

If a tree falls in the forest…

Given the numerous fraudulent death certificates being issued I wouldn’t trust that “2,000 dying per day” number.

It seems that CNN, a wholly owned subsidiary of the DNC, is no longer hiding its parent company.

People are not obsessed with Flynn, they are obsessed with justice which has been cruelly twisted for political purposes and if it can be used to bludgeon Flynn, the ordinary man doesn’t have a chance.