“I believe being accountable means having the difficult conversations, even when they are uncomfortable.” 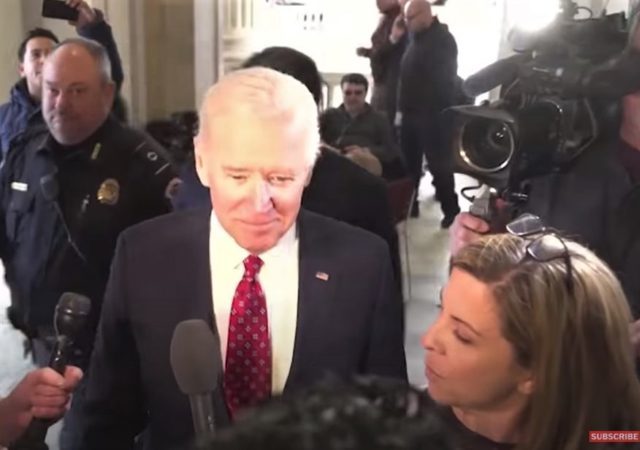 Presumptive 2020 Democratic presidential nominee Joe Biden released a statement on the allegations against him from Tara Reade about 30 minutes before his appearance on Morning Joe:

“They aren’t true. This never happened.”

Reade alleges that Biden pushed her against a wall, put his hand under her skirt, and fingered her in 1993 when she worked on his Senate staff.

A few people have corroborated her story, telling the media that Reade told them about the incident in the mid-90s.

“As a presidential candidate, I’m accountable to the American people. We have lived long enough with a [resident who doesn’t think he is accountable to anyone, and takes responsibility for nothing. That’s not me. I believe being accountable means having the difficult conversations, even when they are uncomfortable. People need to hear the truth,” Biden said.

The allegations came to light in March, but Biden is only now addressing them himself. His campaign denied the allegations, but no one in the media ever asked him directly.

Biden went on to say that if Reade filed a complaint as she alleges, it would live in the National Archives and calls for it to be made public if it is there. He also says that unlike Pres. Trump, he is accountable to tell the truth to the American people. pic.twitter.com/I0ieIoel5w

Believe all women. Remember that one??

“I believe being accountable means having the difficult conversations, even when they are uncomfortable.”
.
Nothing says “conversations” like one more press release from your campaign fixers.

He literally grabbed her by the pussy.

Let this be illustrative to all women! If you are raped, you might want to tell your friends and mother, but the person that you really need to tell is the closest police officer. Twenty year old rape allegations are rarely believable

Biden also said that if Reade filed a complaint, which she claimed she did, it would be in the National Archives.

I wonder if any complaints kept in the National Archives have ever just mysteriously disappeared?

Like, just a week or two before they were called to be made public by a influential politician, who was the subject of an investigation?

Oh, I’m more than sure the Archivists at U. Delaware have already been visited by associates of the Biden campaign and any documents corroborating Reade’s allegations have mysteriously disappeared and they have been told to keep quiet or else they might end up like all those that have ever displeased Hillary.

Sorry, misread your comment. But mine still holds. I’m sure that the National Archives have been visited and any incriminating documents concerning the Reade allegations have been removed and destroyed.

In suggesting a search of the National Archives, Biden must have some reason to feel confident there’s nothing in there to be found.

That could be because he’s innocent of the charge, but it’s a tremendous risk for an innocent person to take (recall the old lawyer’s advice to never ask a question to which you don’t already know the answer.) I don’t think Biden or his advisors are that foolish.

But what better way to ensure that nothing will be found than to have had your team go in and scrub the archive?

Ah, now I see that a spokesman for the National Archives has said they don’t store those records — and in any case, there’s a Senate resolution that would seal them for 50 years.

So basically Joe is suggesting people look in the one place where corroborating evidence is least likely to be found. How much do you want to bet he or his people knew about that Senate resolution when he made that suggestion?

Why would anyone believe that the absence of a complaint in the National Archives is proof that one was never submitted by Reade? An equally likely explanation would be that a member of Biden’s staff sent any such complaint down a memory hole. Biden’s quite dim-witted, but I doubt he’d take the chance of challenging people to find the complaint in the archives unless he was told that any such complaint had been destroyed. I certainly don’t know whether Reade is telling the truth, but I’d be willing to bet her record of truthfulness is better than Biden’s.

How about the Congressional slush fund for sexual misconduct?

My thoughts exactly, some investigative reporter should be camped out on their steps waiting for them to reopen

They would only have a record if she was paid.

“They aren’t true. This never happened.” — says the man who thinks he’s running for congress… He can’t remember yesterday, how would he know if it happened or not.

“They aren’t true. This never happened.” — says the man who thinks he’s running for congress… He can’t remember yesterday, how would he know if it happened or not.

I’d like to believe Biden, but by the Democrat’s standard, we should probably track down Cornpop to ask if Joe ever inappropriatelt catcalled some coeds when he was a lifeguard. Just due dilligence on a candidate.

Having said that, I’m sure that the Republicans are having a lot of fun watching the internal scramble around. I am confident Joe denied it from the first but no one on the campaign believes he didn’t and no one trusts Joe’s memory…..

How would you explain the Larry King interview with her mom?

I’ve seen no proof that that was her mother. I’ve seen no evidence that she was talking about JB. I actually do believe her, but justice needs to be blind.

Unfortunately, justice is no longer blind, at least when it comes to powerful Democrat politicians. The MSM/DNC axis will always hold non-Democrats to the Kavanaugh standard (no evidence = irrefutable proof of guilt), while Democrats like Biden, William Jefferson Clinton, Ted Kennedy, Ralph Northampton, Chris “Waitress Sandwich” Dodd, Justin Fairfax, Gore, Pelosi, and many, many others get to walk free no matter how solid the evidence.This is the very definition of corruption and injustice.

I, for one, no longer wish to pretend justice exists for non-Democrats. We are free now only because the MSM/DNC axis has not (yet) been able to unleash its full fury and hatred on us.

The complaint – if it ever existed – is long gone.

Is the accused a conservative? If yes, then no due process or presumption of innocence for you! You will be destroyed, white supremacist Nazi patriarchy!

Democrats are so predictable.

Considering what Obama and Biden did to colleges with the Title IX star chambers, I consider this situation some big, fat Karma.

“Joe Biden compares supporters of due process to ‘Nazis’”
https://www.thecollegefix.com/joe-biden-compares-supporters-due-process-nazis-marched-charlottesville/

Whether Tara Reade is credible or not is immaterial. It’s the fact that “believe all women” makes it impossible for Biden to fight her allegation without old Joe looking like a traitor to women, especially to the true-believer feminists and working single women who make up the Democrat voting base.

The younger generation of feminists may not want to hold their nosees and press “D”, like their mothers did for Bill Clinton. We’ll see.