Another Michigan Protest Against Whitmer: ‘The Government is Not My Mother’

Another Michigan Protest Against Whitmer: ‘The Government is Not My Mother’

“We won’t be bullied, we won’t be harassed … We’re not going away until Gov. Whitmer resigns from office, gets impeached gets recalled — that’s what we want. We want Michigan open.” 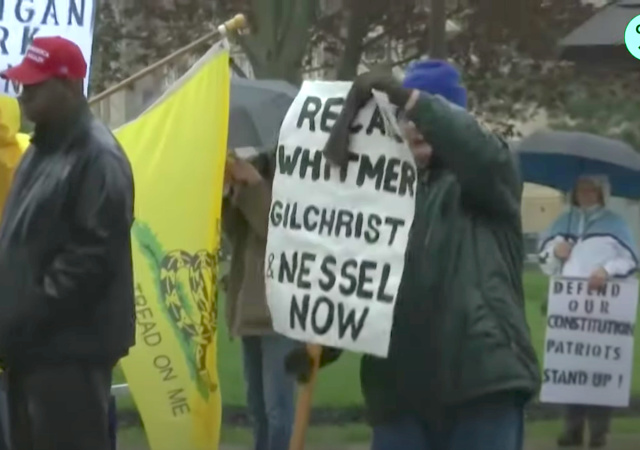 Almost 200 people gathered in the rain to protest that woman in Michigan’s extreme lockdown orders in response to the Wuhan coronavirus outbreak.

By the way, you won’t hear this part from the MSM. One person brought a doll with a noose and an ax. A fight broke up because the other people found it disgusting. The organizers called this man’s display “hate speech.”

“The government is not my mother. Never has been. I’ve been in business longer than they’ve been alive.”

Michiganders have had enough of Democrat Gretchen Whitmer’s nanny state

Whitmer is drunk on her own power! pic.twitter.com/pi94H0LxU3

The protest has now started at the foot of the the Michigan State Capitol. 70-100 people in the crowd. pic.twitter.com/y8fT5Iw93t

We are not the “rednecks” the media portray us to be, said an organizer of Lansing protest against Michigan’s coronavirus-prompted stay-home orders told the crowd.

“We’re still showing up, we’re not going away,” ‚34-year-old Wendy Darling of Ann Arbor, who identified herself as the founder of Michigan United for Liberty, the group behind the rally. “We won’t be bullied, we won’t be harassed … We’re not going away until Gov. Whitmer resigns from office, gets impeached gets recalled — that’s what we want. We want Michigan open.”

One person held a sign that said, “Whitmer is the virus.”

Mike Gibson told MLive.com that “he would have been standing in the same spot had former Gov. Rick Snyder” issued the same lockdown restrictions:

“The Constitution is meant to put shackles on government,” he said. “That is an American concept. It shouldn’t matter what party you belong to.”

He’s not expecting the rally to impact Whitmer’s decision making.

Whitmer “will most likely extend everything,” Gibson said. “That was her intent from the beginning. I don’t think this will stop or dissuade her.”

He equated his attendance to a 150-pound woman fighting off a 300-pound assailant in a back alley.

“The 150-pound woman doesn’t just lay there and get beat; she needs to defend herself,” he said. “That’s pretty much the extent of it, for why you have to speak up. Because you have illegal actions from a politician that violate natural law.”

We’re the 150-pound woman and the assailant is the government, Gibson said.

Whitaker must be a Hillary clone.

MarkSmith in reply to notamemberofanyorganizedpolicital. | May 14, 2020 at 5:35 pm

I want to see the doll! Too Funny.

I SAW IT – it is 11 sec. in to the video. Not sure who/why the women was attacking it. I think it might have been someone that has TDS and trying to create a conflict, lie the guy at the Annapolis rally that jumped out of his car and forgot to put it in park, thus taking out a motorcycle.

Ha,Ha,Ha, I can’t stop laughing about it.

Scream and prance around with your silly signs all you want. If today was election day, Whitmer, and every other Soviet Democrat governor, would win in a landslide. The “Bruce Jenner is a woman” brigade has more people.

Gov. Half-wit was fairly unknown when she won in 2018, which was a good year for democrats. But she hasn’t won any new fans over the shutdown. Trump won in 2016, but only by 10,000 votes, which reflects how closely divided Michigan is. She’s got enough support to avoid a recall, and she might win again in 2022 but it won’t be a landslide.

Whitmer is immune from being influenced by the plaintiff cries of her citizens.

A better line than “The government is not my mother” would be: My body, my choice.

And with the shut down orders, people can’t go out and get signatures on a recall petition

Pretty convenient for a totalitarian

With the weather getting better the people are going out. Stay at home worked due to the colder spring. Once temps have started rising so has discontent and ignoring the idiots EO’s.
Were someone to start a petition to recall I doubt they’d have problems getting signatures.
Rural King and Meijer were crowded today and masks are falling from being worn (my opinion)from very high 90’s to low 90’s at both places today. The give a schiff meter is going lower.
I have yet to wear a mask. Expletive deleted wHitler.