“Tonight, [Brian] Williams and all the robots just like him owe you an apology.” 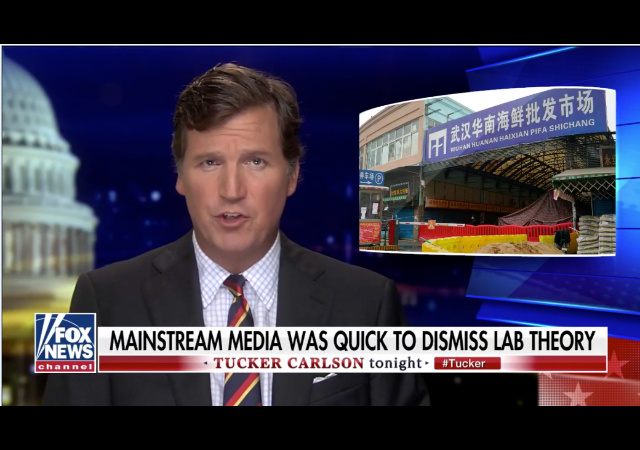 Tucker Carlson rightfully will never let anyone forget that the mainstream media constantly dismissed the theory that the Wuhan coronavirus originated in a lab.

The MSM has slowly allowed the theory to make its way into its reporting, but we must never forget what they did.

Carlson pointed out that the Wuhan lab is located real close to a wet market where it “supposedly originated.” It’s a question worth asking, of course, but our mainstream media doesn’t care:

Unfortunately we live in a political climate which asking questions is greatly discouraged and obedience is prized. Speculation about it remain privately, mostly online.

In February, Senator Tom Cotton of Arkansas said it out loud.

Carlson played the clip of Cotton saying we should at least ask questions about the lab and the virus.

The MSM and leftists slaughtered Cotton after the interview. Now they have to eat crow.

Don’t forget about the ever so truthful Brian Williams! He also lashed out at Cotton and insisted the virus came from the wet market. But the honest journalist forgot that the wet market did not have the type of bats that carry COVID-19:

Tonight, Williams and all the robots just like him owe you an apology. Fox’s special reporters confirm that government sources with access to highly classified intelligence, informed people, believe this virus did in fact originate in the bio-lab in Wuhan.

The first infected patient likely a lab employee who accidentally contracted the virus and spread it through the rest of the world.

That wet market theory? It was just a cover. China pushed that story to Western media to deflect blame from itself and of course the press corps, as they always do, eat it up immediately.

Carlson makes sure the viewers know that no one can say 100% that the virus came from the Wuhan lab, but the amount of evidence makes it hard to believe it came from the wet market.

New York, Other Eastern States Extend Shutdown to May 15

Democratic New York Gov. Andrew Cuomo announced he will extend the non-essential business shutdown until May 15:

Gov. Andrew M. Cuomo said on Thursday that he would extend New York State’s shutdown until May 15, in coordination with other states.

Mr. Cuomo said that New York continued to make progress in containing the coronavirus and he cited encouraging statistics, but he also said that the rate of infection would have to slow much more before he would lift restrictions that were in place through April 29.

“What happens after then? I don’t know,” Mr. Cuomo said of new end date for the restrictions. “We will see depending on what the data shows.”

One sign that New York would not be ready to begin returning to normal by then came later in the day, when a spokeswoman for Mayor Bill de Blasio said New York City was canceling all permitted events for May.

The affected events include BRIC Celebrate Brooklyn concerts in Prospect Park, SummerStage concerts in Central Park and the Brooklyn Half Marathon. A decision on June events was expected later in the week, the spokeswoman said.

President Donald Trump released his guidelines for the states to reopen for business. The CDC director agrees:

The director of the federal Centers for Disease Control and Prevention said on Wednesday he believes 19 or 20 U.S. states have had limited impact from the new coronavirus and their governors believe they may be ready to reopen by President Donald Trump’s May 1 target date.

“There are a number of counties within this country that have not experienced really any coronavirus despite testing,” Robert Redfield said in an interview with ABC’s “Good Morning America.”

“There are a number of states – 19, 20 states – that really have had limited impact from it. So I think we will see some states that are, the governors feel that they’re ready, we’re poised to assist them with that reopening,” Redfield said.

Redfield said mitigation steps such as people staying physically separated would also likely have to continue until a vaccine and treatments are available.

“I do think we’re going to have some social distancing that’s going to be a critical part of our strategy as we go forward,” he told CBS “This Morning” in an interview.

In Alabama, officials have ruled that one of every 10 people who died with covid-19 did not die of covid-19. Among those excluded from the numbers reported to the federal government were a bedbound patient with aspiration pneumonia in one lung and a person with a buildup of fluid and partial collapse of one lung.

Colorado, by contrast, has included some deaths where the disease caused by the novel coronavirus was deemed probable – based on symptoms and possible exposure – but not confirmed through a test.

Health officials in both states say their approach is more accurate. Their divergent methods reflect a national debate over how to count the dead.

New York’s death total shot up because officials added people who doctors thought died of coronavirus even if they didn’t get tested.

The CDC allowed that recently, but said “attributing a death to the virus can be a judgement call.”

Media apology is one of the largest oxymorons I have ever heard of! Never happen.

The only apology one can expect from today’s media is defensiveness or denial.

notamemberofanyorganizedpolicital in reply to healthguyfsu. | April 17, 2020 at 4:28 pm

Our dear beloved dictator is in a coordinated illegal action with other governors. He certainly loves his fascism, doesn’t he?

His little henchman, DeBlasio is saying NYC will remain shut down. I wonder what these fascists will do when they kill the major sources of state income and have no money coming in from the Federal Government because of the illegal actions of this governor?

My BS meter was pegged early on when this WuHan Coronavirus was claimed to have been from a wet market when it was known that the lab was right near there. How is it that the propaganda media swallowed the lies told by China with zero questioning why the wet market was the source of the disease when China has also been reported to have no problem with using bioweapons against it’s enemies?

Why is it that our beloved dictator can set the criteria for deaths attributed to this Chinese virus so loosely to strain all credibility, yet the propagandists of the media are pushing to have him replace Dementia Joe? Why are they not questioning why he lied about hospital demands for ventilators then less than a week later said there are plenty and the more than a thousand ventilators were in storage?

Why are no reporters asking why our government officials are still getting their salaries when they have nearly shut down most people from making their living using this virus as an excuse to do so? State income through the numerous taxes they impose on us has to be way down. They should be under the same distress financially as those they impose their dictates upon.

“Why are no reporters asking why our government officials are still getting their salaries when they have nearly shut down most people from making their living using this virus as an excuse to do so? ”

Consequences are only for the little people.

This is why any decision, any law, any edict by the government has to apply equally to the ENTIRE government. That way sanity and logic will begin to become a part of the decision process. If not, then we get what we have now.

Why are they not questioning why he lied about hospital demands for ventilators then less than a week later said there are plenty and the more than a thousand ventilators were in storage?

Because he never said the state had run out of ventilators. He said, correctly, that they needed ventilators for the expected peak.

Andy can go dunk his head in the Hudson.

The problem is downstate, there’s no reason to keep upstate on extreme quarantine.

notamemberofanyorganizedpolicital in reply to UnCivilServant. | April 17, 2020 at 9:35 am

The Shutdown Backlash Is Coming Soon—With a Vengeance

The only part I disagree with is the phrase lab worker “accidentally” spread virus .

Good point. “Accidentally” is a conclusion based on what evidence?

Why hasn’t the MSM reported this….?
https://www.justice.gov/opa/pr/harvard-university-professor-and-two-chinese-nationals-charged-three-separate-china-related

Does…not…fit..the…narrative. This is business as normal for the CCP. Stealing technology and criminality through bribery. A little theft here, a little bribe there… “No raindrop considers itself the cause of a flood”.

They did report it when it happened. When else should they have reported it? And what possible connection does it have to the current crisis?

Yesterday, the CCP was busy pushing the idea that they “didn’t make the COVID-19 virus in their lab”.I have no problem with that statement as it stands, but they want to imply that the virus was never in their lab, which is probably not true.

This is the same argument that folks made when Sen Cotton first said the virus came from a virology lab in Wuhan. Immediately, the pecksniffs claimed he said it was engineered in a Wuhan lab, but Sen Cotton never mentioned the word, “engineered”.

In this case, the CCP used a Twitter meme.

This is exactly right, but they are enabled and encouraged by all the idiots on the right, including a shocking number of commenters on this blog, who are saying “engineered”, and who insist on derailing this conversation into that paranoid theory. I accuse them of doing so on purpose, in order to help the Chinese.

Frankly, it appears the Chinese were a long way away from being able to engineer anything that wouldn’t kill them first.

I understand there are a lot of scientific methods when doing bio research that don’t involve quote ……engineering…..

GP has this …
In 2017, the Chinese had a similar release incident that sickened eight people and killed one. It started when two workers at a Chinese CDC lab independently isolated and experimented in vitro/vivo a SARS virus. In one of these sessions the scientists took a previously unknown variant of the SARS virus and moved it out from a BSL-4 high-containment facility into a low-safety diarrhea research lab where the two were working. Apparently, the virus inactivation process didn’t work properly and both were infected at the lab and then proceeded to infect other people outside of the lab.

The Newsweek story claims there are 3 types of COVID-19, A, B, and C
A is the closest to the bat, is what’s in the US. B is what was mostly in Wuhan and Europe, and C is the daughter of B.

It’s good to take anything Newspeek says with a large helping of suspicion.
.

Here out west we don’t have the total lockdown, but even so even WY will have a protest (Other than Casper, Cheyenne, and J-Hole, we couldn’t break social distancing if we wanted to).

With Speaker Antionette’s let them eat ice cream, the guillotines are out.

We are sane and smart. But that means we recognize there is a narrow slice of the population at real risk, and we need to block them off, while the rest of us go about our business and develop asymptomatic herd immunity.