Georgia’s governor is meeting #ReopenResistance. Washington State is taking a “Strategic Approach.” One expert market analysts suggest all states could reopen in 3 weeks. 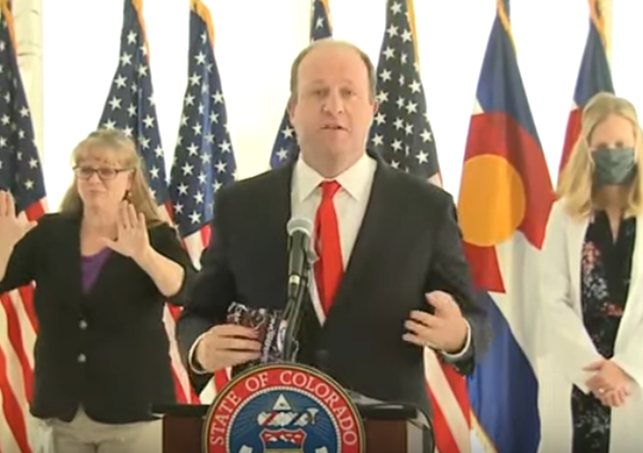 Today’s update will focus on the Great American Reopening from the Pandemic of 2020.

Colorado Gov. Jared Polis, a Democrat, announced that the statewide stay-at-home order would expire at the end of the day on April 26 as scheduled, and then will transition into a ‘Safer at Home’ phase.

Called “Safer at Home,” the phase set to begin April 27 is not an order, but rather a strong encouragement that residents stay at home as much as possible.

Local governments will have the opportunity to implement stricter restrictions, particularly those who may be experiencing an outbreak.

Schools will remain closed during the Safer At Home phase through the remainder of the school year.

It isn’t clear when restaurants will reopen to dining in, but the governor stated he hopes to see those types of businesses open mid-May with strong social distancing practices taking place. It may be based on a county-by-county basis. There are many restaurants and retail stores still open with curbside pickup and delivery.

Georgia mayors alarmed by the governor’s ‘reckless’ plan to reopen the economy.

Governors who are beginning the reopen earlier rather than later are meeting some resistance on the scale generally reserved for President Donald Trump. Perhaps the biggest target of the reopen-resistance is Georgia Governor Brian Kemp.

For example, here is what Bess Levin of Vanity Fair had to say about Kemp and his plans.

Approximately two weeks ago, Georgia governor Brian Kemp made a name for himself when he announced on the steps of his state’s capitol that he was a massive imbecile. Sure, he didn’t use the exact words “Citizens of Georgia, I’ve gathered you here today to announce that I’ve tested positive for an I.Q. of less than nine,” but he might as well have. Because it was then—on April 2, 2020!— that Kemp revealed he had only just learned that asymptomatic carriers of the novel coronavirus could spread the disease.

Additionally, the Democratic mayors in several cities are disinclined to reopen.

The mayor of Atlanta, Georgia’s biggest city, said Kemp’s decision was not based on “anything logical”.

“We see our numbers are continuing to tick up in this state, we see that our deaths are rising,” said Keisha Lance Bottoms, a Democrat. “We have some of the highest asthma rates in the country right here in Atlanta.”

She later issued a statement insisting city residents stay inside.

The Democratic mayor of Savannah, Van Johnson, said ending the lockdown was “reckless, premature and dangerous”.

Fox News host Martha MacCallum interviewed Kemp, and he ably defended his position, noting that the plan is a “measured approach with a lot of different requirements.” The governor noted it wasn’t as if they were tossing the keys to company owners and going back to business as usual. The procedures were developed based on the recommendations of public health officials.

On the West Coast, Washington state’s governor has also not yet extended the statewide “Stay At Home” order.

The governor did not announce an extension of the Stay Home, Stay Healthy order, which is set to expire on Monday, May 4. Nor did he announce an earlier date to reopen.

“It’ll look more like turning a dial than flipping a switch,” Inslee said of the timeline.

Inslee says the return to public life will occur in measured steps, guided by science. He said his office will be transparent about the data it’s using to make decisions about loosening or tightening the Stay Home, Stay Healthy initiative.

The governor said there will be 1,500 workers focused solely on contact tracing by the second week of May. “Somewhat like a fire brigade.”

All 50 states have their plans. For example, being a Californian, this is what I have to look forward to:

There is no set end date for California’s stay-at-home order. Gov. Gavin Newsom (D) has joined a multistate task force, along with Oregon and Washington, to discuss reopening. He warned that some restrictions, such as masks in restaurants and bans against large gatherings, will stay in place through the summer. Schools are closed through the rest of the school year.

Charts show the US could be able to reopen for business in three weeks.

The potential for the United States economy to reopen in a few weeks is now on the table, according to an expert market analyst interviewed by CNBC’s Jim Cramer.

After consulting with Larry Williams, the “Mad Money” host said the renowned market analyst and trader made one of the “boldest contrarian calls” he had ever witnessed as the coronavirus outbreak takes its toll on society. Williams believes that officials could be free to loosen restrictive measures by May 12, or three weeks from Tuesday.

…Williams based his timeline to begin relaxing shutdown mandates on the trajectory the virus took in countries such as Italy, Germany, South Korea and Iran, Cramer said. The outbreaks in those nations share a similar pattern, and it could be a sign that the U.S. could get the crisis under control within the next month, he said.

“Williams is not a wishful-thinking kind of guy. He’s a heavy-hitter,” Cramer said, “and his forecast [is] worth taking seriously.”

“such as masks in restaurants” – kind of defeats the point?

I’m telling you, once it becomes clear that 15-20 cities ….. are holding back the rest of the entire USA, things are gonna change fast, politically. – Ace of Spades

How about the mayors not be paid while their city is in lock down?

notamemberofanyorganizedpolicital in reply to Ronbert. | April 22, 2020 at 9:17 am

How about they get thrown in The Slammer and throw away the key!

I’ve always wondered why bureaucrats and politicians are considered ‘essential’.

but with more people infected indicates that it really was really equivalent to influenza.

Hospital Analysis Reports Show …
Half Of Coronavirus Patients Are Obese

Our pitiful and grossly authoritarian governor Polis is on record, from a week ago, of telling Coloradans that the state will “never be the same”. This is the tell. However this whole pandemic got started, and I don’t really care at this point, the goal of the left is to use this event to “fundamentally change” our country and the entire western world for that matter.

These are the times that try men’s souls, and the election in November will be the most important election of my lifetime. Will we continue down the Road to Serfdom at breakneck speed, or at least try to tap the brakes?

anyone want to bet the majority of the cities showing ‘resistance’ to reopening are democratic controlled cities.

No surprise at all. Leftism is largely a product of big cities.

The iresistable siren’s call of $$$$ that re-opening their economies will get them open fast. The laggards (CA, NY, IL etc..) will not only be watching the states that open making money, they will be losing any bargaining power they hope to get in the next round of “relief” bailouts from the fed. There will be no relief for states who refuse to re-open their economies including restoring all constitutional rights. No new fascist powers!

Being a Californian and my travel itinerary involving mostly destination-based running vacations, I guess I’ll be spending my vacation dollars in the US rather than CA.

Here, in Oregon, we are being told that state and local governments are losing HUGE amounts of tax money (no lottery, no video poker, no motel tax, and on and on. The lefty-run governments are only concerned with how to recoup their tax slush funds. Very few deaths in Oregon and California, but very strict “guidelines.”

The dems only source of angst? How can they undermine the constitution, destroy the economy and not lose their tax base? Idiots.

The only reason that many states are opening their economies, even a little bit, is because the populace is rising up and they are heavily armed. Look at the states which are leading the reopening? They are all states where the population is traditionally heavily armed, even the Dem controlled states such as Colorado. Nothing has really changed. The whole point if the “crisis” was not to save people’s lives, but to crush the rise of populism worldwide by destroying the world economy. One of the keys to that is the US. The US comprises 27% of the world consumer market. We are actually able to support our own economy, domestically, for months or even years. Unless that economy is shutdown totally, of course. Then the US consumer runs out of money. Once that happens, the government installs a plan for government support of the workforce. When the workforce becomes dependent enough on the government for its support, then the government can actually tell people where they will work and for how much. The entire economy becomes dependent upon the government. And, then the people who the government actually answers to and works for control everything. It is a brilliant plan and it is working. And, it is working largely because a vast portion of the populace is either ignorant or stupid. I guess the elite was right about the masses all along.

The cities think the rural areas have the same problems with the Wuhan virus infections as they do, but the more sparsely populated areas don’t share those problems. For an extreme but feasible comparison, look at NYC against Wyoming. For another one, look at metro Atlanta against a central Georgia Black Belt county, or Nashville against an area on the Cumberland Plateau.

Would somebody tell the big city dwellers that the rest of us aren’t like them (thank God)?
.

We need to start calling this the, “Wuhan-Democrat Virus” because that’s what it is.