Many states have postponed voting until the summer. 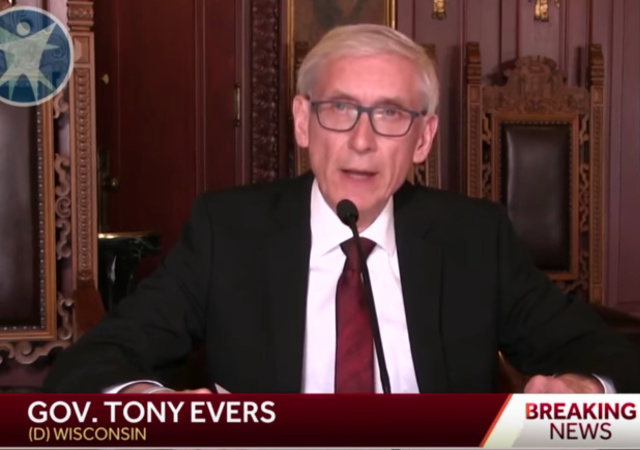 UPDATE: The Wisconsin Supreme Court blocked an executive order from Democratic Gov. Tony Evers that postponed the election to June 9. It will go on tomorrow.

The Wisconsin Supreme Court ruled 4-2 and said Evers did not have the authority to move the election on his own.

The Supreme Court ruled 5-4 on the absentee ballots:

“Extending the date by which ballots may be cast by voters — not just received by the municipal clerks but cast by voters — for an additional six days after the scheduled election day fundamentally alters the nature of the election,” Supreme Court Justice Brett Kavanaugh said in the opinion for the 5-4 majority on Monday.

“The district court, acting in view of the dramatically evolving COVID–19 pandemic, entered a preliminary injunction to safeguard the availability of absentee voting in Wisconsin’s spring election,” Supreme Court Justice Ruth Bader Ginsburg wrote in a minority opinion, which was joined by all the court’s liberal members.

Absentee ballots were set to be accepted until April 13, but now they must be postmarked by April 7.

Democratic Wisconsin Gov. Tony Evers issued an executive order to suspend in-person voting for elections until June 9 due to the Wuhan coronavirus.

The primary should have taken place tomorrow.

Evers has tried to delay the election on Saturday, but the GOP-controlled legislature said “such a late postponement would cause confusion and leave open municipal positions that will be vacated this month.”

Evers explained he had to issue the executive order for the safety of those in Wisconsin, especially since the White House has issued more safety precautions.

“The virus directs us as to what our decision-making is, not human beings, and clearly I am following the science, as I always have,” Evers told POLITICO in an interview Monday. Evers said he heard from constituents relaying fear for their safety and their kids’ safety, as he tracked updates about the number of deaths and rate of infections in Wisconsin. “Given that, I felt that the governor is the one who has to step up and stand for those people that aren’t having their voices heard.”

Evers expects a court challenge from state Republicans, who this weekend rebuffed a late request that the GOP-controlled legislature take action to postpone the election. Evers said if Republicans don’t challenge the order, it will go into effect immediately.

Democrats will always be Democrats. At least the convention nominees have already been determined. Of course Biden may withdraw for “health reasons” if the Party strong arms him.

Looks like governor EVERS took a CHANCE and TINKERed with the election.

“Democrat” gov., not ever democratic……….

I didn’t realize George Burns was governor of Wisconsin.

notamemberofanyorganizedpolicital in reply to SeekingRationalThought. | April 6, 2020 at 7:24 pm

Since DEMS let the dead vote……

. . . he heard from constituents relaying fear for their safety and their kids’ safety . . .

Given that, I felt that the governor is the one who has to step up and stand for those people that aren’t having their voices heard.

Great Maker, would someone please explain to me why democrats that say this kind of stuff just simply don’t explode in a puff flame of smoke and disappear? You’d think that someone telling such outrageous lies like that something should happen.

Sixty more days to push Jill Karofsky onto the Wisconsin SC is what they’re after.

Surprised he just didn’t declare democrats won all the elections and votes need not be counted.
Dems are cheats and they still want to cheat only they want it enacted into law. Ballot havesting, anywhere voting and more.

Wish it had played out this way in Ohio. Our esteemed Dewine tried to delay the election the evening beforehand. A judge in Columbus said he couldn’t do that, so he had his health director cancel it in the middle of the night for “public health” reasons. Constitution and all be damned. He isn’t running for re-election this year, but if he were the optics would have been even worse.

The narrative on when and where to vote changes by the minute. It’s almost as if a herd of cats is making up the rules, oh wait they are. They waited until the night before the primary to move/extend the date. Then they said absentee ballots would be mailed out to eligible voters. Now it’s required to get an application to receive an absentee ballot. Who knows what tomorrow’s “new” regulation is going to be. I already know the answer to that, NOBODY.