86 of these cadets will now be officers in the US Space Force. 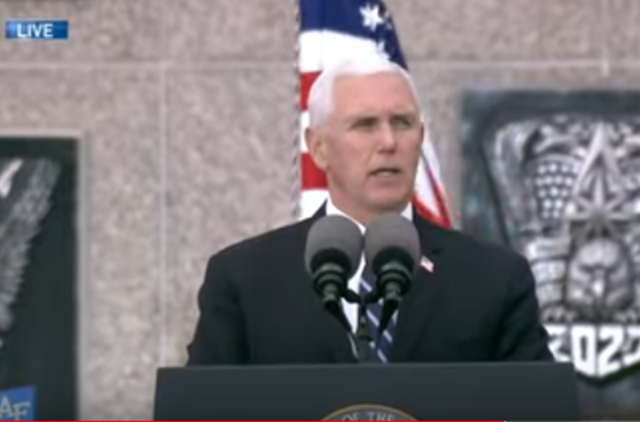 The U.S. Air Force Academy sent its 2020 graduates into the ranks six weeks this past Saturday, in response to the response to the Wuhan Coronavirus pandemic that has impacted the country and the institution.

In a sign of how graduations may be conducted for other schools in the future, the cadets’ guests watched the ceremony virtually.

The ceremony for the nearly 1,000 cadets took place on the academy grounds in the military-rich town of Colorado Springs with guests and families watching virtually in order to comply with social distancing guidelines.

“When you arrived in 2016 or so, you knew your graduation day would be memorable, but did you imagine that your commencement would take place in mid-April, or that each of us would have a face mask at the ready or that you would march a Covid compliant 8 feet apart on the Terrazzo, or for that matter, that commissioning into the Space Force would be an option,” Secretary of the Air Force Barbara Barrett posed to the graduating class.

“Today, you are living history,” she added.

Eighty-six of these cadets will move directly into the U.S. Space Force, marking the first infusion of commissioned personnel into the new service since its creation last year.

Vice President Mike Pence was in attendance at the event and congratulated the entire graduating class.

“Two years ago, President Trump laid out a bold vision for American leadership in space,” said Pence. “Last December, the president made that vision a reality when he put his signature on a historic law that created the six branch of our armed forces, the United States Space Force. I am proud to stand here today as 86 members of the Air Force Academy’s class of 2020 will commission as the first company grade officers of the Space Force.”

Air Force Secretary Barbara Barrett commented on the vital role these new officers will play in defense of the nation and in the newest branch of the U.S. military.

“As our nation’s first Space Force lieutenants, these leaders will defend democracy and protect the ultimate high ground of space,” said Barrett. “As they depart the Academy today, they will join the ranks of air and space power pioneers. They will be instrumental in building a lean, agile and forward-looking Space Force defending our nation, our allies and our American interests in space.”

The cadets marched 6 feet apart to seats that were spread across the center of the Colorado Springs campus to minimize the risk of spreading the virus. Academy underclassmen were sent home earlier this spring because of the pandemic. The graduating cadets remained, but remained isolated from one another to prevent the spread of the virus.

Sadly, some of the restrictions may have had tragic consequences. Earlier this month, the Academy relaxed social distancing rules that had created conditions that may have triggered two cadet suicides.

Some people complained that the rules made the Colorado Springs academy prison-like for the nearly 1,000 seniors who remain on the campus while others complete the year online, according to the Gazette, which obtained emails from the school.

…Cadets will be allowed to leave the campus for drive-thru food, get a casual Friday during which they can wear civilian clothing and may congregate in small groups while following state guidelines.

Also rescinded are long “tours” of marching practice for cadets who don’t stay 6 feet away from their classmates.

We wish all the graduating cadets much success.

The full ceremony is here: