Trump recently requested the US cut their contributions to WHO in half. 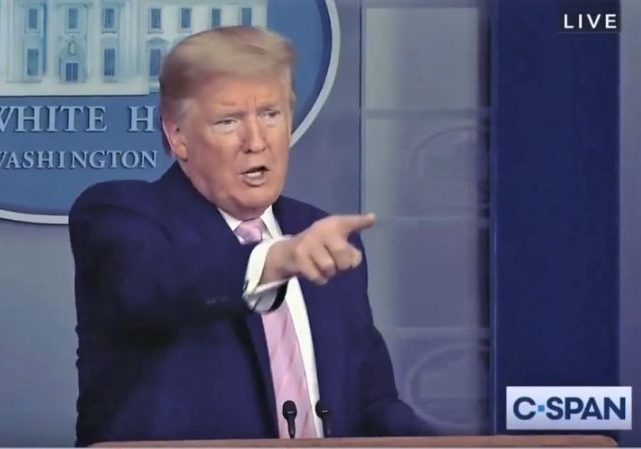 Tuesday, Trump said the administration will be “giving a good look” at the funding the US provides to the World Health Organization.

In a tweet, Trump said, “The W.H.O. really blew it. For some reason, funded largely by the United States, yet very China centric. We will be giving that a good look. Fortunately I rejected their advice on keeping our borders open to China early on. Why did they give us such a faulty recommendation?”

Trump recently requested the US cut their contributions to WHO in half.

Trump’s suggestion to reduce WHO’s funding comes after he already proposed in the White House’s budget request for fiscal year 2021 to cut in half the amount Congress allocated the agency in 2020 — from roughly $122 million to less than $58 million.

Among WHO’s 194 member states, the U.S. remains its greatest contributor, accounting for roughly 2.5 percent of the agency’s $4.8 billion budget.

The WHO has drawn international criticism for their deference to China during the Wuhan Coronavirus outbreak.

Don’t give them a dime

notamemberofanyorganizedpolicital in reply to gonzotx. | April 7, 2020 at 3:05 pm

And shut all their facilities up along with all of those of the U.N. – sell them off with the proceeds going to the U.S. Treasury.

notamemberofanyorganizedpolicital in reply to gonzotx. | April 7, 2020 at 3:07 pm

Just think, the FEDS will have to drastically cut all funding for worthless programs, and state and loco governments must do the same to survive now.

Speaking of such….isn’t funding of Government schools the #1 biggest budget item for almost if not all states, counties, cities and towns?

Only way they can get budget relief is to turn over 100% of all that education function to private and charter schools.

Poof! All the budget woes disappear then.

the Whuhan Health Orchestrator did us no favors that’s for sure.

notamemberofanyorganizedpolicital in reply to dmacleo. | April 7, 2020 at 3:14 pm

RE: PRESIDENT TRUMP: “The W.H.O. really blew it. For some reason, funded largely by the United States, yet very China centric. We will be giving that a good look. Fortunately I rejected their advice on keeping our borders open to China early on. Why did they give us such a faulty recommendation?”

Of Course President Trump already knows the answer, but it is because W.H.O. the DEMS and their Media are all COLLUDING with the Communist Chinese Government.

while we’re at it, lets cut our funding to the UN to 1/193rd of their general budget, and zero out all other line items for them.

no sense funding people who hate us.

Jefferson and that crowd warned us about alliances. I take it further and include WHO, the UN, and other such messes. At least we havent joined that international court of justice or whatever its called.

At least not yet.

I think this should be declared as the end of the annual W.H.O. global flu and the worthless vaccine that comes with it. We can take care of ourselves and our domestic flu kills more people than theirs and we’ve never had to shut down our economy to deal with it.

Do we get a refund?

I don’t understand all the hate. I really like the WHO. Especially Roger Daltrey.

notamemberofanyorganizedpolicital in reply to MTED. | April 7, 2020 at 5:32 pm

This is a problems with lots of international agenies. They are beholden to their donor states, and susceptible to lobbying or pressure from member states determined to extend influence.

Perhaps the best course would be to simply withdraw from membership in the WHO, we could still trade information and provide recommendations on best practices.

The same for the U.N. Simply withdraw and abrogate every treaty, agreement, memorandum of understanding. Tell them to pound sand period. Then set up a rival organization comprised of responsible and not totally corrupted nations who still truly wish to be our allies. Off the top of my head Canada, Japan, Taiwan, Australia, New Zealand, India, U.K., Poland, Hungary, Czech Republic.

I am sure that there would be others once the actual facts on the ground changed and those nations were forced into an actual choice vs a theoretical one.

Perhaps 20 or so years ago I was a judge for a contest which had Chinese competitors, their leader tried to bribe me. I bet that WHO people were bribed.

The Who’s exclusion of Taiwan–one of the success stories of dealing with the Red China virus–at the behest of the Commies is a disgrace. So long as it excludes Taiwan, the US should not give a cent.

Don’t give the WHO a dime and while at it withdraw from the U.N. and kick their asses out of the U.S.