But I thought Trump sided with the white supremacists! 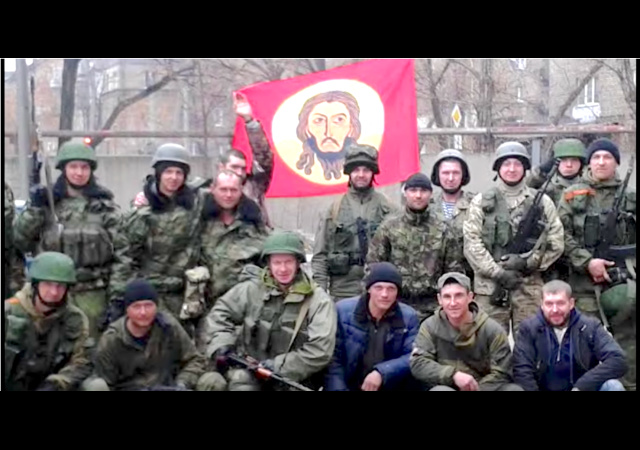 I never knew the U.S. has never designated a white supremacist group as a terrorist group.

It’s weird President Donald Trump’s administration has taken this step because according to the MSM he is a white supremacist.

The administration slapped the label on the Russian Imperial Movement.

Believe it or not, The New York Times first reported this story:

While the label of specially designated global terrorist has been frequently used for Islamist extremists, there have been growing concerns among U.S. officials about violent white supremacists with transnational links over the past five years. In 2018, the White House added that threat to the government’s National Strategy for Counterterrorism.

“These designations are unprecedented,” said Ambassador Nathan A. Sales, the State Department’s counterterrorism coordinator. “This is the first time the United States has ever designated white supremacists as terrorists, and this illustrates how seriously this administration takes the white supremacist terrorist threat. We are doing things no previous administration has done to counter this threat.”

The State Department’s designation for the organization, the Russian Imperial Movement, sets up the Treasury Department’s Office of Foreign Assets Control to block any American property or assets belonging to the group. It will also bar Americans from financial dealings with the organization and make it easier to ban its members from traveling to the United States.

Stanislav Anatolyevich Vorobyev, Denis Valliullovich Gariev, and Nikolay Nikolayevich Trushchalov, the leaders of the group, will receive a designation “as individual terrorists who will face similar sanctions, the officials said.”

Of course, the NYT implied Trump’s administration took this move in order to stop the suggestions that he supports white supremacist groups.

Officials said the Russian Imperial Movement has no ties to Russian President Vladimir Putin, but has not taken any action against the group. The group “has helped advance the Russian government’s external goals by recruiting Russian fighters to aid pro-Russia separatists in eastern Ukraine.”

The FBI continues to investigate if the leader of the Russian Imperial Movement “has any ties to the Russian government’s security or intelligence services, former law enforcement officials said.”

The organization had two facilities in St. Petersburg. U.S. officials said they “offered paramilitary training to neo-Nazis and white supremacists.” The leaders had activities to train others “for woodland and urban assault, tactical weapons and hand-to-hand combat training.”

The group has also helped support neo-Nazi organizations in Scandinavia, which dovetails with the Russian government’s broader pattern of trying to stoke internal divisions, including along racial lines, and sow chaos in Western democracies.

In 2017, the Russian Imperial Movement came up at a trial in Sweden of three men who were accused of plotting bomb attacks targeting asylum seekers. Prosecutors said two of the defendants had traveled to St. Petersburg, Russia, to attend 11 days of paramilitary training at a camp operated by the group, fueling their radicalization.

Mary McCord served in the Justice Department under President Barack Obama and Trump. She told the NYT:

“It is important,” she said. “Far-right extremist causes, in particular white supremacy and white nationalism, have become more international. It is appropriate for the State Department to have been scrutinizing whether there are organizations that meet the criteria for that designation because with it, the organization becomes poison in terms of doing business with it or providing funds, goods or services to it.”

I found this video on YouTube. The organization justifies its actions as a way to bring Russia and the West back to the Christian faith. They make these moves because people have gone against God’s word.

The narrator slams gays and foreigners.

These idiots are in the former Soviet republics. Their nationalism doesn’t involve the US (except possibly as a foe).
It’s probably more proper to call them “Russian” rather than white.

notamemberofanyorganizedpolicital in reply to Neo. | April 6, 2020 at 3:19 pm

In an odd way, it’s reassuring.

Academics and fake news media have been screaming 24/7 about the threat of “white supremacists” but have never produced any convincing examples, and have very carefully avoided defining the term.

They screamed that law professor Amy Wax was a white supremacist for saying it was better if people obeyed the law, got jobs, and raised families.

But now it seems there really are a few white supremacists in the world — just not in the United States.

“Academics and fake news media have been screaming 24/7….”

But I thought they where white supremacists…..

Next, BLM. Also, Thugvon’s parents and their associates.

Baby Lives Matter? Say it ain’t so. They’re deplorable, a “burden”, even.

Babies deserve parents who will place the child’s welfare above their own. Far too many parents are not competent to raise a child, or themselves.

The Martins were knee deep in terrorising Zimmerman and his family. That crap has continued to this day. They need to be brought to justice, both for what they did to Zimmerman and the way they raised Thugvon. Thugvon was a victim of piss poor parenting.

That’s not terrorism. In any case they’re not foreign and not an organization.

Milhouse, how many of the RICO predicates can be readily applied to individual BLM terror cells?

Not many. BLM isn’t an organization, it’s an idea. Most people who act on that idea don’t do so in concert with others. If some people act together then they might be subject to RICO, depending on what it is they do, and how much each one participates in their crimes.

The Western-backed coup in Kiev still makes the news, glorifying the Neo-Progressive movement that forced division of Ukraine.

So The Orange Crush did this to distract from his really doing this?

How did they characterize Hutu vs Tutsi? The internecine Arab, conflicts? Persian? Chinese? Indigenous Americans? The progressive post-apartheid lynching of blacks in South Africa? Diversity is a many colored adversity.

So when is CAIR gonna be listed?

Russian Imperial Movement is a tiny, tiny group with no influence.

CAIR on the other hand has an influence, because of the ***HUGE*** MSM boost, well beyond its size.

And Islam is a deadly cult whose murderous hand has touched millions and millions over its 1400 years.

Com’n, Donald, add CAIR, the Muslim Brotherhood, and all those “Palestine” groups.

CAIR is not foreign, and does not engage in terrorism. (It was suspected of supporting terrorism, but that suspicion has never been tested.)

Tell that to journalists who CAIR terrorised, and the publications who hung their own out to dry in response to CAIR.

CAIR has not terrorized any journalists, or anyone else. Stop making stuff up. The only accusation ever made against CAIR is that it supported terrorism in other countries. And even that was only an accusation; I think it’s true, but it’s never been proven in court.

How about valerie jarrett? And kerry? And obama?

Not foreign, not terrorists, and not organizations.

When they add Antifa to their terrorist list I’ll take as less of a political move.

Not foreign, and at least as far as anyone knows not an organization.

Obviously, this is a decoy to throw people off of DJT’s true white supremacism. /sarc

Yes, this is EXACTLY what a covert white supremacist would do…people are dying of racism in the US every day!

notamemberofanyorganizedpolicital in reply to healthguyfsu. | April 6, 2020 at 3:22 pm

Leave these bozos to babble in Belarus. Still it’s proper to identify people that you don’t want to come to the US–and I doubt that the morons in the MSM will declare this act “racist and xenophobic”. And there are some Russkies (or at least Russkies from the former USSR) who are willing to, and in fact did, blow up the Boston Marathon.

It’s best to look at Derb’s categories of what gets called white supremacist. Only one of the many seems to be malevolent.

Communist, Nazi groups and KKK groups are far LEFT. They are international socialism and national socialism respectively, plus Democratic Party racism, but our press and our political class continue in this slander of the conservative side of our political spectrum whose entire history has been fighting these radical left menaces.

However Russian imperialists were traditionally considered to be on the right.

The LEAST of our problems are these morons.

The only overwhelmingly white group deserving of this designation is Antifa.

It’s not obvious that a basically Russian group interested in paramilitary operations outside of the United States has a whole lot to do with “white supremacy” or “white nationalism”. I’m also a little puzzled about how “nationalism” can “become more international”—to the extent that it’s international, it ain’t nationalism.