Trump’s “been responsive to our needs. He has. And so, as a question, as a sort of an offer of objectivity, I have to acknowledge that publicly. And the fact is every time I’ve called the president, he’s quickly gotten on the line.” 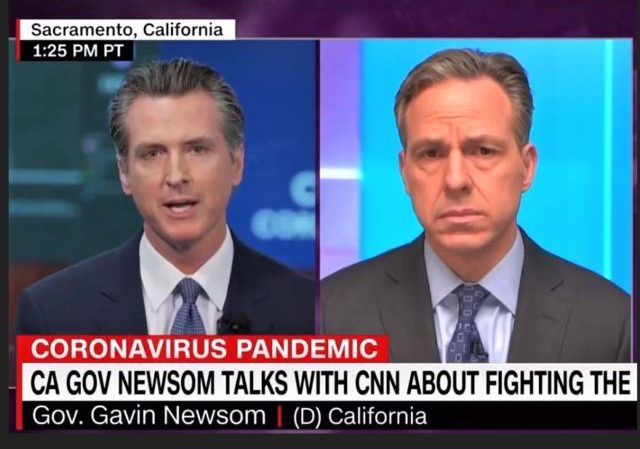 I was interviewed by a major media outlet today about my take on media coverage of Trump’s handling of the Wuhan coronavirus pandemic. Let’s see if any of it runs.

One point I made is that it is clear that the major media (NYT, WaP0 and the networks other than Fox) frame their coverage and questions so at to seek soundbites that can be used against Trump. It’s always a set up, and Trump doesn’t fall for it and pushes back, and then we have a dust up.

CNN is possibly the worst, infusing its news coverage (as opposed to opinion coverage) with snide chyrons, and playing petty games like cutting away from the daily briefings when Trump is speaking.

There is no better example than Jake Tapper’s interview with California Governor Gavin Newsom, who has spoken highly of Trump’s responsiveness to California’s needs in the past.

Tapper’s question is framed in such a way as to solicit a negative soundbite:

“Tapper: “I’ve talked to officials throughout the country who have said they have to temper their remarks and what they say about the federal government response for fear that president Trump will punish the citizens of their state if he considers them to be a complainer. You and president Trump seem to have been working collaboratively, he praised you yesterday. Do you find yourself, by necessity, tempering what you say in terms of any issues you might have with the federal response?”

But Newsom didn’t take the bait.

Newsom: “…. Let me just be candid with you. I’d be lying to you to say that [Trump] hasn’t been responsive to our needs. He has. And so, as a question, as a sort of an offer of objectivity, I have to acknowledge that publicly. And the fact is every time I’ve called the president, he’s quickly gotten on the line. And when we asked to get support for that Mercy ship in southern California, he was able to direct that in real time. We’ve got 2000 of these field medical sites that are up, almost all operational now in the state because of his support. Those are the facts….”

Calif. Gov. @GavinNewsom: “Let me just be candid with you. I’d be lying to you to say that [Trump] hasn’t been responsive to our needs. He has. And so, as a question, as a sort of an offer of objectivity, I have to acknowledge that publicly." pic.twitter.com/GLWGuACz7a

That look on Jake’s face was priceless.

By the way, CNN is paying a price for its childish news coverage. It’s highest rated show was Jake Tapper, coming in at 22nd place. That’s right, CNN doesn’t have any show in the top 20 for cable news.

It’s *almost* like CNN doesn’t care about its ratings. It’s on a mission, damn the torpedoes.

So sick of these people. Literally – I’ve had it, and I’ve had it with the ignormuses who ape their b.s.

They are dead to me.

notamemberofanyorganizedpolicital in reply to TheFineReport.com. | April 1, 2020 at 8:53 pm

How sweet it is though now that millions of Americans are forced to stay home and can watch the “media, MSM.”

Jake should stick to things he knows such as interviewing Gov. Cuomo and asking such deep probing questions as:

“Andrew Cuomo You Have Pierced Nipples, Can I Touch Them?”

Dan Bongino
@
Liberals, and their media overlords, absolutely hate it when you post THEIR OWN headlines. Retweet this & watch the responses as they melt down with rage.

notamemberofanyorganizedpolicital in reply to TheFineReport.com. | April 1, 2020 at 9:00 pm

Socially distance yourself from the press, media, and social platforms (e.g. Google = steering), in order to mitigate the spread of social contagion. In the meantime, there are rational and practical steps to mitigate contracting the Wuhan virus (SARS-CoV-2) and curb the progress of the Covid-19 disease. The same steps we can take to mitigate the progress of influenza, colds, and other highly transmissible diseases throughout the year, every year.

* social distancing (3-6 ft)
* hand to face hygiene
* coexisting with people (especially in close proximity) who are infected, who have the disease
* when to visit the hospital (e.g. resource management), and triage (e.g. telemedical services)

Bottom-line: We don’t have to shut down the country. We should avoid spreading a social contagion. There are rational and reasonable steps to take in order to mitigate infection, respond to disease, to manage resources, and to mitigate collateral damage.

cnn should be banned from any further Presidential press conferences. If they are not going to televise the President during the live briefings, they don’t need any cnn propagandists in the room or on the White House grounds.

notamemberofanyorganizedpolicital in reply to CKYoung. | April 1, 2020 at 8:57 pm

Speaking of banning….. Have you seen this?

Idonttweet in reply to notamemberofanyorganizedpolicital. | April 1, 2020 at 10:26 pm

I saw that and found no verification. I can only point out the date.

Always a TDS judge to rule for CNN. Jake Tapper… the t-rd that never flushes away.

notamemberofanyorganizedpolicital in reply to alaskabob. | April 1, 2020 at 9:07 pm

Here is something CNN can choke on.

James Woods
@
Nancy didn’t think this was of any import…

rabidfox in reply to notamemberofanyorganizedpolicital. | April 1, 2020 at 9:21 pm

That also needs to be an important GOP political ad.

If CNN is banned the press corps — including Fox — would probably all boycott the events completely. Despite their differences, when one of them is threatened they band together. When Fox complained that 0bama was excluding them, not from press conferences but from interviews, all the other networks threatened not to do their interviews either unless Fox was given one. So if CNN was kicked out of a press conference you can imagine how the rest would react.

You are correct that this did happen when Fox was banned. I’m not certain that we would see the same results today, however.

So what will they do if the WH simply extends OANN a permanent invitation in addition to the pool.

So, Newsom is left trending center. Join us.

There is one thing we can do about it: do not tune in to CNN, do not visit their website, if you are in a waiting room ask management to please change the channel.
I am more for a petition to kick them out of the White House press pool, but I see how that’s not likely to happen.

I don’t know about hospital waiting rooms. But in airport departure lounges CNN pays them to show their programming. In fact, CNN actually pays to put in the TVs.

If hospitals work the same way they won’t change the channel no matter how nicely or forcefully you ask.

Gavin has other issues to worry about
https://abc7.com/officials-engineer-tried-to-smash-train-into-usns-mercy/6069395/

Tapper’s expression reminds me of an infant trying to squeeze out a particularly large and smelly stool.

Ok, but you’ve misspelled his name.

The look is a 1000 yard stare from a soulless man that sold out long ago for 30k a day to sell snake oil to the few viewers that bother to tune in.

When you hear the mouthpiece of Sauron, the face does not matter: there is no doubt about who is really speaking.

“CNN is paying a price for its childish news coverage.”
Since the market isn’t speaking, who is? Soros? China? All of the above?

Who would have thought Newsom would be a piss in Tapper’s Wheaties kind of guy? Hahaha!

“It’s on a mission, damn the torpedoes.”

CNN has been a fake “news” outlet for decades, but has accelerated into oblivion with the election of the anti-communist Donald Trump.

I have a feeling that Tapper has an assignment to get those negative remarks, and when he gets pushback, he hears about it, later.

I have to admit to having a little more respect for Gov Newsome. He told the truth as he saw it in a hostile environment.

notamemberofanyorganizedpolicital in reply to JimWoo. | April 2, 2020 at 4:45 pm

No DEM is to ever be Trusted.

He’s a witch… warlock! Cancel him!

Now that people are avoiding airports, CNN lost 90% of its audience.

notamemberofanyorganizedpolicital in reply to Comanche Voter. | April 2, 2020 at 4:44 pm

That still leaves them 1 viewer.

One of my favorite Jake Tapper moments happened recently, on Jeopardy. His face was part of a clue and the contestants had to name him. NO ONE KNEW! I fell off my chair laughing.

notamemberofanyorganizedpolicital in reply to EOS. | April 2, 2020 at 4:43 pm

If Cuomo and Newsom are jostling for being the Dem candidate to replace Biden, this would give Newsom an edge for now. Those disgruntled Dem voters who are leaning Trump are not likely to find that cranky lying anti-Trump Cuomo very appealing. Not that I think the US would buy into Newsom or any CA Dem. After all, he’s related to Pelosi and Jerry Brown.

Another reason why Newsom is a non-starter:

Jesus Lord God, what a SORRY excuse for a “journalist”. Mainstream media is beyond the pale.

This is a serious question, not sarcasm. How does CNN stay on the air? Who’s keeping them going?

Fapper, like the rest of the Clinton News Network, needs to be muzzled to aid American morale during the Wu Flu Epidemic. Consider it a public service.

Mr. Newsom, you are not telling Mr. Tapper what he wants to hear.