“Hillary Clinton has a history of enabling powerful men to cover up their sexual predatory behaviors and their inappropriate sexual misconduct. We don’t need that for this country.” 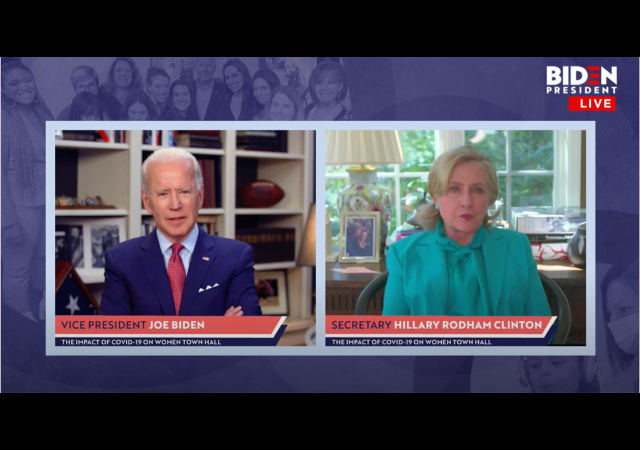 “I voted for Hillary Clinton in 2016. I voted for her in the primary. I’m a lifelong Democrat. But yet, what I see now is someone enabling a sexual predator and it was my former boss, Joe Biden, who raped me,” Reade told Fox News. “Hillary Clinton has a history of enabling powerful men to cover up their sexual predatory behaviors and their inappropriate sexual misconduct. We don’t need that for this country. We don’t need that for our new generation coming up that wants institutional rape culture to change.”

She added: “I will not be smeared, dismissed or ignored. I stand in truth and I will keep speaking out.”

Hillary endorsed Biden on Tuesday during a virtual town hall about how the Wuhan coronavirus has affected women.

I mean, is it any shock that Hillary supports Biden besides the obvious fact that he will be the nominee? Look at her husband President Bill Clinton. She was also quite friendly with Harvey Weinstein.

Earlier on Tuesday, Reade demanded the University of Delaware release Biden’s personnel records from his time in the Senate. There is a possibility her complaint against him is in the collection:

“I’m calling for the release of the documents being held by the University of Delaware that contain Biden’s staff personnel records because I believe it will have my complaint form, as well as my separation letter and other documents,” Reade told Fox News on Tuesday. “Maybe if other staffers that have tried to file complaints would come to light — why are they under seal? And why won’t they be released to the public?”

The university said it will not release the records until two years after Biden retires from public life.

Is you asked me, Hillary Clinton would probably have no problem holding her husband’s victims while he raped them.

notamemberofanyorganizedpolicital in reply to Exiliado. | April 29, 2020 at 1:28 pm

That is what she virtually did in Arkansas.

Hey DEMS, this is the Hill-ary to die on!

Let’s ask Hillary about this.

Is that refusal to disclose valid if the police get a warrant?

The criminal event is more than 30 years old. Depending on the physical location of that event, the statute of limitations has most likely run long ago. The police would most likely not take a report regarding it today, and certainly not investigate; it would be like making what many call a “counter report” of a past vehicle collision. No warrant under those circumstances would be proper. Only murder is without a statute of limitations.

“Only murder is without a statute of limitations.”

Just so no one is left with the wrong impression, this is not true. What limitations apply or do not, or have time limits, for both criminal and civil violations varies by state.

The state of Wyoming for example, has n statute of limitations on anything criminal. They can prosecute you 50 years after the fact.

I think the woman is looking for someone on the left to acknowledge that Joe Biden is a creep and to be believed! Just like Juanita Broaddrick wanted.

I know that a great deal of the blame can be laid at the feet of the government schools, teachers’ unions, and the leftist MSM, but still.

Despite the ugliness of what the Democrat Party stands for today, as well as its racist history going back (at least) to the early 19th C., the Ds will predictably get millions of votes this November.

I think, while they are opening sealed congressional files on sexual assault… Open them all. Every Congress critter for the last 5 decades. Every one that was officially filed, and investigated, and found credible. I want to know how much of my tax dollars have gone to paying off the abused women (and men) by those who make our laws.

notamemberofanyorganizedpolicital in reply to Morning Sunshine. | April 29, 2020 at 4:15 pm

I like to imagine the following press conference with her majesty, the Hillary of Clinton …

Reporter: Madame Secretary, what will Biden do that Trump hasn’t?

Reporter: Does that include grabbing p***y?

Reporter: But, we have a woman who verfied that Biden did what Trump said he would do in a recording in the last election?

Her Majesty: Those are two totally different things. Trump said that some women will let them grab them by their … Can we change the subject? That’s an order!

Reporter: If your husband endorses Biden past experience as making him worthy of being the President, doesn’t that qualify as ‘Me Too’ also?

“Hillary Clinton has a history of enabling powerful men to cover up their sexual predatory behaviors and their inappropriate sexual misconduct. We don’t need that for this country.”

At the risk of being the skunk at the picnic, I’m curious how Tara voted in 2016.

Thought she said she voted for Hillary.

Thought she said she voted for Hillary.

I’m shocked, shocked I tell you, that Hillary Clinton would enable a sexual predator.

What is the world coming to?

Where I came in.

If the records tended to exonerate Joe they would have been released by now. So……

Let’s be honest here…she’s been doing that for her husband for decades.

If only she was a sexual predator.

She is a traitor – a SERIAL traitor.

“Hillary Clinton has a history of enabling powerful men to cover up their sexual predatory behaviors and their inappropriate sexual misconduct. We don’t need that for this country. We don’t need that for our new generation coming up that wants institutional rape culture to change.” But you voted for her in 2016. Geez, now I’m starting to question Ms. Reades motives.

Either getting her last dig in or providing an excuse for eventually pulling Biden off the stage.

All women victims must be believed!

We must believe all Democrat candidates!

To hell with Tara Reade and other rape victims, we must defend our democracy. Our democracy! Bah, blah, blah.

No probable cause to violate privacy or bypass jurisdiction for the first. Allegation backed with multiple witnesses after the fact for the second.

I voted for Hillary Clinton in 2016. I voted for her in the primary. […] “Hillary Clinton has a history of enabling powerful men to cover up their sexual predatory behaviors and their inappropriate sexual misconduct.

So what changed? Why was she OK then but not now, just because this time you’re the accuser?

Now this is getting real interesting because Ms. Reade says she is not going away and will be not silenced. Next we have the Univ. of Delaware sitting on Biden’s senate records that, most likely, would corroborate Ms. Reade’s account. So we have a Democratic candidate that the Party is rallying around because they basically have no one else, and they know it. Their only hope is that Biden stays alive long enough until the November election.

With all due respect to Ms. Reade, she should think twice about taking on Hillary or speaking ill of her. Hill is known for her grudges and people disappearing suddenly.