ABC, CBS, and NBC jumped on the coronavirus story right away. 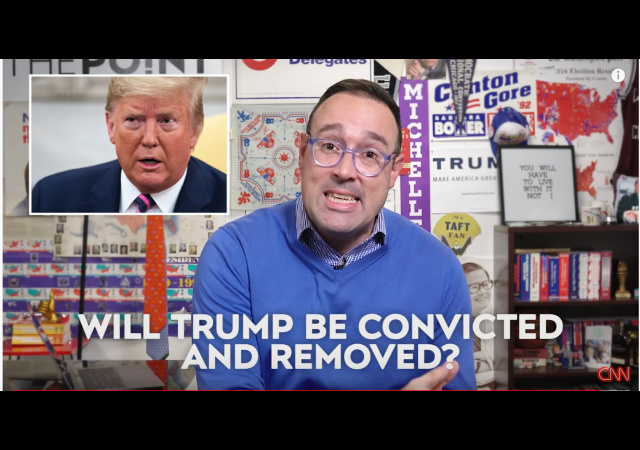 However, CNN needs to look in a mirror because its coverage in January and February barely covered the coronavirus outbreak during the impeachment trial.

CNN avoided many topics, not just the coronavirus, during the impeachment:

Yet a Media Research Center analysis finds CNN’s own coverage of the virus in January and early February was incredibly deficient, as the liberal cable network was reluctant to devote much time to anything unrelated to Trump’s impeachment.

MRC analysts examined all of CNN’s daily programming from 6:00 am to midnight EST between January 17 (the first day any news network discussed the coronavirus) through February 5. Our analysts found that CNN’s January coronavirus airtime averaged 12 minutes per day, or about 40 seconds per hour. That works out to a meager 1.6 percent of their total coverage, even after excluding an average of 21 minutes of ad time per hour on the network.

The coronavirus sneaked into the news by January. Everyone knew it was a big deal because China closed down shop, including celebrations of the Chinese New Year.

ABC, NBC, and CBS jumped onto the coronavirus news right away:

By comparison, the three major broadcast networks (ABC, CBS, and NBC) projected a clear sense of urgency from the start. On average they spent two and a half minutes per evening newscast on the coronavirus during those same days — and their newscasts are only about 19 minutes long (minus commercials and teases). That comes out to a rate of five minutes of coronavirus coverage per hour (14% of all coverage), or nearly eight times the rate of CNN.

Additionally, the coronavirus outbreak was the lead-off story in 19 out of 57 (33%) of the network evening broadcasts. During those same 20 days, CNN made the virus its lead story of just four of its 360 hours of programming (or slightly more than one percent).

Even we knew the coronavirus would become a major news story. Leslie devoted most of her posts to the virus to the point that I suggested we make one post about it and add information as it came out during the day.

By the way, Leslie was one of the first in the country to write about coronavirus and dedicate her time to inform everyone about it.

Well, at the time, there was no way to use Wuhan Virus to bludgeon Trump.

notamemberofanyorganizedpolicital in reply to UnCivilServant. | April 6, 2020 at 4:30 pm

“ABC, NBC, & CBS jumped onto the coronavirus news right away”

THE CRIMINAL’S M.O. always gives them away…as the criminals they are……

It Is China-Controlled Propaganda, But Media Are Still Outraged — Ace of Spades

ABC’s Jonathan Karl Invites Chinese Communist Party to Attend White House Coronavirus Briefing…
Posted by sundance
Remember when President Trump said the U.S. media were the enemy of the American people? Well, consider this… In another clear example of how the U.S. media will do anything in their effort to undermine President Trump, yesterday they held hands with Chinese communists.

ABC News chief Washington DC narrative engineer Jonathan Karl is the current rotating head of the White House Correspondents Association (WHCA). The WHCA has a customary and traditional role of selecting the journalists who will participate in the White House daily briefing.

There is no other business where people get paid for being so wrong so often.

Especially the weather. Here in the Pacific Northwest, even as it’s raining, the “forecast” indicates 0% chance of rain.

notamemberofanyorganizedpolicital in reply to dystopia. | April 6, 2020 at 7:56 pm

You mean “to wrap their tongues around some one other self’s words?”

why does anyone view cnn when fnc is so much better ?

Or why watch CNN when MSNBC is better produced and sometimes has smarter talk. Get yer lefty viewpoints from MSNBC and right-and sometimes more balanced- from FNC. I just avoid the hard and shrill yappers on each like the pompous idiot after Maddow and Hannity, e.g. (sorry, just not my cup of tea).

why does anyone view cnn when fnc is so much better ?

Nobody really watches CNN. Their ratings are largely based upon the captive audiences they had at the various airports across the nation. And now that air travel has been all but shutdown (still see planes flying overhead for some reason) I suspect we’re seeing CNN’s true ratings.

Lately FNC is the Andrew Cuomo show, because apparently there isn’t a damn thing going on any place but New York. Note to FNC, there are 49 other states (56 in Obamaspeak) that are having issues also.

Haven’t watch a second of CNN in some time. But with reporting here and elsewhere and from watching just parts of the daily pandemic briefings, I have a gut feeling people at that network are realizing how they’ve screwed up. There is almost a panic among some of them. Sadly, their panic energy is focused almost exclusively on “gotcha” efforts. The derangement creature (avoiding the virus term) seems to have taken over the entire organism at this point.

notamemberofanyorganizedpolicital in reply to casualobserver. | April 6, 2020 at 4:43 pm

CNN is CIA owned and bred.

If there is any panic it’s only the corrupt news readers fearing for the overpaid positions.

‘Got the bubble head bleach blonde, comes on at five
she can tell you about the plane crash with a gleam
In her eye it’s interesting when people die
Give us dirty laundry’

The only thing I remember about the IMPEACHMENT farce was it had to be delayed so San Fran anas 15k in open could be delivered.

I like to ask my TDS infected, Monday morning quarterbacking friends and relatives this question.

Put yourself back in late January, early February when all you did was post crap on FB that Trump had committed treason and had to be impeached… how would you have reacted if he started shutting down the country/economy at that moment in time?

Put yourself back in late January, early February when all you did was post crap on FB that Trump had committed treason and had to be impeached… how would you have reacted if he started shutting down the country/economy at that moment in time?

They would have acted no differently. They would still be posting crap on FB and Twitter that Trump had committed treason and had to be impeached. To the lunatic lefties it doesn’t matter and the “Orange Man Bad!” syndrome reigns supreme with them.

I think you missed Mass’s point. They would certainly have continued to call for his impeachment and removal, but added to that would have been the submission of his actions (a shutdown such as eventually happened) as “proof” of his tyrannical nature.

As it is, he is being criticized by the same people now for not having been tyrannical soon enough.

You can’t please some people.

The most incredibile info I get from this post is that CNN can sell over a third of their air time on commercials. Are there so many fools willing to waste their money?

I suspect the CNN model is based on the paid advertising model masquerading as journalism. To me it resembles making a political donation by getting the person to write a book and then buying a million copies, of which 10,000 are donated to public libraries and 990,000 are burnt. I bet ad time on CNN is sold at a very low rate because of viewership numbers, and that the entire network is being uh underwritten by a cadre of globalists. The NYT and Slime magazine et al are probably doing the same thing. LI has more legitimacy than any of them.

A study was needed?