She will work as First Lady Melania Trump’s spokeswoman and chief of staff. 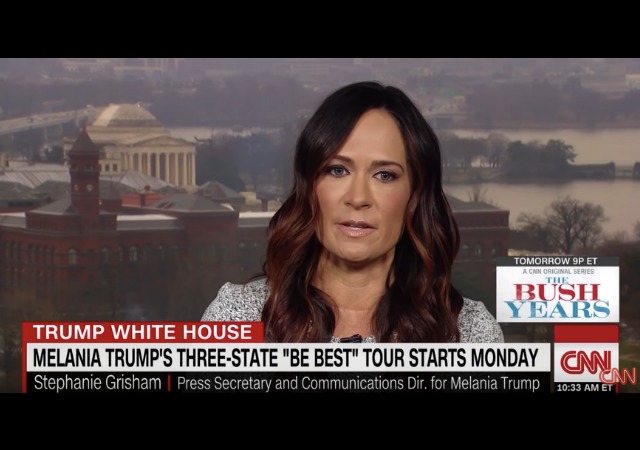 Stephanie Grisham plans to leave her position as White House press secretary. She got the job less than a year ago but never held a press briefing during that time.

Grisham worked as First Lady Melania Trump’s spokeswoman. She will rejoin the East Wing to work for Mrs. Trump again as spokeswoman and chief of staff.

“I am excited to welcome Stephanie back to the team in this new role,” stated First Lady Melania Trump. “She has been a mainstay and true leader in the Administration from even before day one, and I know she will excel as Chief of Staff. I appreciate all that Lindsay Reynolds did over the past three years, and wish her well in her future endeavors.”

“I continue to be honored to serve both the President and First Lady in the Administration,” stated Grisham. “ My replacements will be announced in the coming days and I will stay in the West Wing to help with a smooth transition for as long as needed.”

Lindsay Reynolds resigned early this week to spend time with her family. Stephanie will begin her role as Chief of Staff effective immediately.

I’d like to see Tammy Bruce in that role.

The best ever. Make her the first inductee into the White House press secretary Hall of Fame.

Wonder what Hope is up to.

resigned early this week to spend time with her family.

Right. One of the classics, right up there with “The check is in the mail,” and “Honest, it flew into my hand.”

The person was in the position for 3+ years. Perhaps with the C19 situation, she does want to spend more time with her family.

I’m reading this differently. I figure Trump realizes he’s his own press secretary. HE holds court over the press. HE answers all the questions. HE fends off vindictive reporters. Why would he need/want a press secretary. Stephanie knows this too so it’s not that she’s fired. Plus, Melania seems pleased that Stephanie is returning to work with her.

My understanding of this was Grisham was brought in as a quick replacement for Sanders. The press sec role changed when Acosta continued to grandstand. Honestly the WHP are a sad lot. Grisham was loyal and Trump knows that. Kayleigh McEnany will wrangle the gaggles with aplomb.

I say bring in Rumsfeld to tag team with Trump, That would be a great press conference with journalists blow up daily. It could be a new drinking game!

Now that would be something.

They should make Aileen Wuornos press secretary. And arm her with a machine gun.