The number might remain high because states haven’t processed all the unemployment filings. 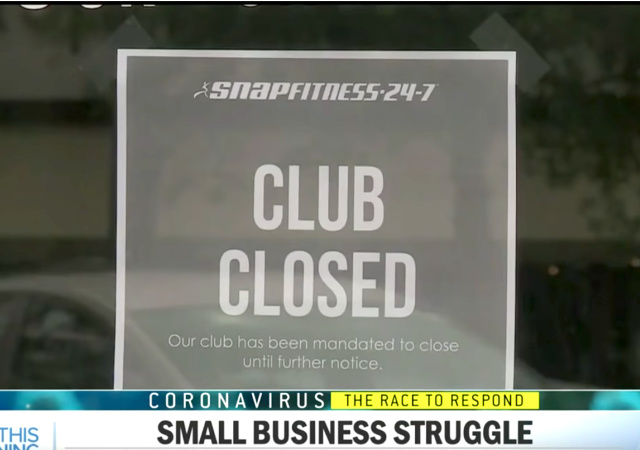 The Labor Department revealed that a record 6.6 million Americans applied for unemployment last week. Over 3.3 million applied the previous week.

The Wuhan coronavirus has led to many businesses shutting down in effort to slow the spread of the virus.

There are several reasons why unemployment claims are likely to remain high in the coming weeks. For one, many states haven’t fully processed all unemployment-benefit applications due to the deluge. Further, the federal rescue package signed into law last week increases the pool of workers who can tap benefits by making independent contractors and self-employed individuals eligible.

Joe Brusuelas, chief economist at RSM US LLP, said the unemployment rate rises by 1 percentage point for every 1.5 million initial jobless claims. That means two weeks of claims near 3 million could lead to a jobless rate of 7.5%.

Layoffs have been particularly widespread among small businesses. Such firms operate on lower cash reserves and quickly resorted to layoffs, according to researchers at the University of North Carolina’s Kenan-Flagler Business School. They estimated that up to 6.6 million small-business employees were immediately laid off when state governments in March began mandating businesses close to contain the virus’s spread.

We need a team of forensic accountants to investigate every US politician and government official to determine which ones took Chinese money. Examine their voting record to determine if they gave favorable treatment to China. We can start with the clinton foundation and the bidens (rosemont seneca) but the corruption has been going on for decades and involves both parties.

China has infiltrated every aspect of our political system, economic engine and academia.

Their economy would have collapsed years ago had it not been for our politicians selling us out and sending billions/trillions of dollars to them via unbalanced trade, unenforced intellectual property theft, technology theft and other schemes.

wen ho lee is an example of how china has played US officials for decades. When lee was caught spying on the US (in the nuclear program no less), he called in his markers. lee didn’t simply escape justice, communist chinese lackey bill clinton and other US government officials actually apologized to the guy. It gets worse. He sued the US government and was paid $1.6 million, including legal fees.

We also need to investigate which ones benefited from insider trading.

Half the businesses in America are temporarily shuttered putting millions of Americans temporarily out of work. And yet, the news media is heralding these unemployment figures like they’re such a great surprise. Come on, Capt Obvious, stop making it sound like this is a surprising revelation.

Watching the daily Presidential Press Briefings, reporters are clearly pushing for Trump to essentially shut down the entire country for months on end. Then they go on their networks and use these kinds of numbers to “prove” what horrible things Trump is doing to the country.

The ruling elite is stupid. Half the population is stupid. And, now everyone acts surprised that the over-the-top reaction to a flu-like disease is destroying the US, and Global, economy. 10 million unemployment claims in just 2 weeks. That is the population of NYC. And, this fiasco is supposed to continue for the next four weeks, at least. If the jobless claims rate only doubles, during that time, we will have 20 million people on government welfare. That does not include those workers who are not eligible for unemployment compensation. And, how long will it take to put those people back to work, at their previous salary points? Weeks, months, years? Finally, what happens when this disease crops up again next flu season, just like every other corona virus in history? Do we shut the world down, again? Or do we sit back and accept the 15,000-85,000 COVID related deaths a year as we do with influenza?

Tucker Carlson finally gets it. In his recent airing, he asked the questions, how do people pay their bills, with reduced, or no, income? How do businesses, such as rental property owners pay their bills under the same circumstances? How can a populous afford to support these people, through taxpayer funds, if the taxpayers have no money?

People are waking up to the fact that their leaders have been systematically lying to them about this disease. So far, the news media, and government officials have succeeded in crippling the US economy, if not yet quite destroying it. Now we move into the civil unrest phase. People, faced with financial ruination, no clear road to recovery and oppressive, draconian government edicts will push back. Either the leadership of this country is TDSTL [Too Damn Stupid To Live] or it is actually trying to destroy the country. Either way, they people are proving themselves to be extremely dangerous and sooner or later, the populous will move to remove them.

Sounds like someone had quite a plan and it’s finally coming together . . .

Someone please embarrass Jay Inslee on the national stage for taking a month to start paying on the federal UI funds that Trump approved on 3/22.

Inslee is 3 weeks away from even allowing contractors and sole proprietors to file.

His employment security office is a train wreck and needs federal intervention.