Whitmer banned the sale of non-essential items in stores, including garden seeds, and residence-to-residence travel for residents of the state. 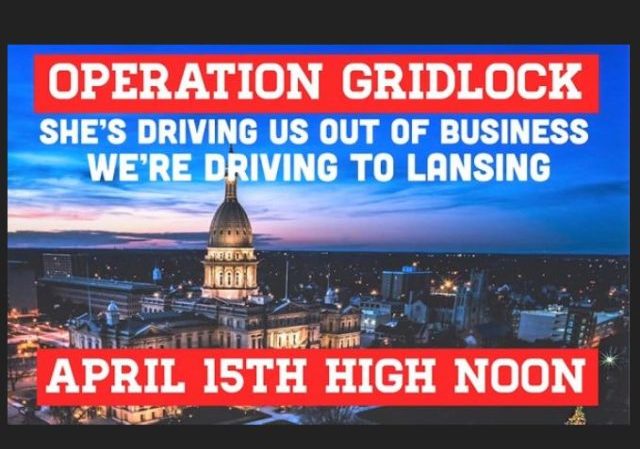 Democratic Michigan Gov. Gretchen Whitmer, that woman in Michigan, faces a massive protest after she extended orders in the state due to the Wuhan coronavirus. This includes banning the sale of non-essential items, including garden seeds in stores, and residence-to-residence travel for residents of the state.

A man also drew up a recall petition on Change.org, which has received over 200,000 signatures.

From The Lansing State Journal:

Critics of Michigan’s expanded stay-home order are planning an in-vehicle protest to tell the governor they believe she has gone too far.

The Michigan Conservative Coalition and Michigan Freedom Fund, who organized the protest, asked for protesters to surround the Capitol in their vehicles at noon Wednesday to display flags and signs, make noise and be disruptive about Gov. Gretchen Whitmer’s “erratic, unilateral orders that threaten Michiganders’ economic existence,” according to a news release. They warned protesters to come ready for a potentially major traffic jam.

Whitmer gave the okay for the people to hold the protest. She also used the rally to take a shot at Education Secretary Betsy DeVos, who immediately responded:

During a newspress conference Monday, Whitmer said the Michigan Freedom Fund is funded in-part by the family of U.S. Secretary of Education Betsy DeVos, something she called “inappropriate.”

Nick Wasmiller, a spokesperson for the DeVos family, said the family has not spent any money on the protest, nor has it offered prior support to organizers.

“The DeVos family, however, understands the frustration of fellow Michiganders as elements of the governor’s top-down approach appear to go beyond public safety,” Wasmiller said in the statement. “Michigan deserves competent governance, not baseless attacks.”

Whitmer’s comment about DeVos disgusted Michigan Freedom Fund’s executive director Tony Daunt. He described her claim about the DeVos family as “wild” because the organization only provided funds towards advertising for the rally:

“That is the extent of what we have the freedom fund have done we put a whopping $250 behind a Facebook ad to promote this just to get more eyeballs on it because we think it’s an important and important use of our constitutional freedoms. And for some reason the governor decided today to make this wild claim that the DeVos family was funding this rally and I think the Conservative Coalition and the thousands of people who have signed on to that group are offended by that. And as they should be,” Daunt said.

Daunt like many critics, says the governor’s latest order is arbitrary and unnecessary.

“It’s not about essential versus non-essential it’s safe versus unsafe. And I think her order on Thursday that doubled down and actually tightened restrictions on people was really tone deaf,” Daunt added.

The Freedom Fund is still running the $250 Facebook ad and is encouraging people to partake in the gridlock rally.

“We certainly are not about to be intimidated by some kind of offhanded incorrect statements from the governor and her team,” he said.

A man named John Powell started a petition on Change.org to recall Whitmer. As of Tuesday morning, over 210,000 people signed the petition.

Powell wrote that Whitmer’s actions have caused “more Michiganders to get sick.” But his grievances span farther than the coronavirus pandemic.

Powell claimed Whitmer “has lied from day one with her #Fixthedamnedroads which she has failed to do anything in this regards.”

He also accused her of “negligence” due to her response to #PFAS. These PFAS are in regards to the drinking water in Michigan. Whitmer told the Michigan Department of Environmental Quality to pursue standards for drinking water instead of waiting for federal guidelines.

However, Whitmer revived the Pure Michigan program “on a reduced scale” in February in the 2021 budget. She proposed the campaign receive more funds “from private tourism operators.”

The petition has no legal standing. The state needs “signatures equal 25 percent of the votes cast for governor within the electoral district of the officer to be recalled.” In 2018, when Whitmer won the election, 4,250,585 Michiganders voted in the governor’s race.

The petition could pressure Whitmer to stop restricting the movements of her constituents and rescind some of her silly orders.

the left is like a cornered animal they see over 120 years of baby steps toward a take over evaporate before their eyes. They refuse to allow that to happen

Ever read Gardner’s The Hard Road to World Order?

“In short, the ‘house of world order’ [world government] will have to be built from the bottom up rather than from the top down. It will look like a great ‘booming, buzzing confusion,’ to use William James’ famous description of reality, but an end run around national sovereignty, eroding it piece by piece [all those baby steps], will accomplish much more than the old-fashioned frontal assault.”

Notice the deception which is always practiced by the left. An “end run around national sovereignty?” Were we ever asked if we wanted an elimination of our sovereignty? To substitute our Declaration of Independence for the UN Charter?

Since the erosion of national sovereignty is Job 1, you can understand why they hate Trump and his America First program. They may hate Trump, but they hate you even more. Trump is simply a proxy for freedom-loving, independent Americans.

Governor Whitmer has all the makings of a Tyrant.

Actually, with all the press and all the wacky things she’s doing to attract attention, she has all the makings of a Democrat vice-presidential nominee. Any publicity is good publicity for her, because the press will bend it all in her favor.

A thousand people show up to honk horns and protest? They’ll find five supporters to interview.

Ten thousand people sign a petition to remove her from office? They’ll find ten college professors all excited about her proposals for (fill in the blank)

See Virginia and the 2nd amendment rally.
Northam and VA legislature still passed gun control.
But, I do believe even some on the left are beginning to arouse from their lethargy.

Unless she’s gone out and hired it, she is definitely lacking in both cunning and intellect which are required for being a true tyrant.

At this point, she’s just a dumb bully with a grating ignoramus Michigander accent.

The Damn Roads are paved with good intentions. Asphalt and Concrete are too expensive.

Thanks! I’m stealing it!

She said in the debate against the repub who accused her of wanting to put in a 25 cent gas tax to pay for the damnroads that she wouldn’t do that.
Then like our boy governor of the 80’s jim blanchard upon entering office she dallied around for about a month then proposed a 45 cent a gallon tax increase because there was no other solution she said, like blanchard ran on no new taxes when the economy was down. Liars both.
We still have enough repubs to block her and they did. No gas tax increase.
So she went around them and had the highway department take out a 300 hundred million dollar long term loan out. So the kids and grandkids will be paying for the roads.
She’s a liar and climber. Governor is just what she considers a single step on her march to a higher fascist dream. She’ll get down on her knees and do a kamala harris on joe biden for the veep slot.
And the lt. gov and ag are just as bad if not worse.

is she related to Nelson Rockefeller, he did almost the same thing, he couldn’t get a tax increase for roads so he tried to get a 300m bond against the NYS Thruway

Perfect, though to be phonetically correct, it should read
“Deeyam roods” in order to capture the true Gretchen Jenner post nasal drip accent.

Leftists don’t tolerate dissent. Watch for her to let Antifa beat and even kill the protesters while ordering police to stand back.

Watch the protesters shoot back. Michigan is not Massachusetts, or New York City.

And with masks in vogue, they’re free to roam anonymously.

“The petition could pressure Whitmer to stop restricting the movements of her constituents and rescind some of her silly orders.”

Bullies love to see their targets suffer. I do not think this effect is unintended.

As long as those protesters aren’t carrying recently-bought contraband seed packets in their cars, they should be fine.

The present governor?!? OY! Such a mishagoose!

she could also be referred to as a “Michigoosestepper”.

Wonder how many of those vehicles will have some protective hardware onboard.

I’m sure there will be plenty of Barneys out there taking license numbers.

We have a post that uses our range. They’ve been really good folks.
I think/hope they won’t play the “Your rights are suspended” crap. We’ll find out tomorrow.

“Your rights are suspended”. One of two things happens if that is said. The nice people comply and lose another freedom. If they don’t, maybe there will be the 21st Century Shot Heard ‘Round the World.

Too bad we don’t have more people in NYS that are not classically insane to do the same type protest against Cuomo.

Of course she is a half wit, and Cuomo, while at best average intelligence, is not as stupid as she is. With the left it seems the degrees of separation from morons and imbeciles are enough to have members of the sheep think they are presidential material.

BTW, there was a study done which was reported on at PowerLine which showed that there is a much higher incident of mental issues the further left on the political scale you are. Just more proof, as if it’s needed, that liberalism is a mental disorder.

Well, this explains a lot …

CBS: Seed companies can’t keep up as more Americans turn to growing their own food

Isn’t it overstating things to say that the governor banned seeds? According to a Michigan lawyer podcast, the order forbids entry to the entire Garden section of large stores. I agree that this is a stupid micromanaging rule, but it is not as extremely specific as some people contend.

The purchasing of seeds offered in grocery stores has also been prohibited. In other words, you could buy a head of lettuce or a bag of apples, but the sea display is off-limits By order of her Majesty, the governess.

Every time there is a crisis or public emergency, it reveals who the left really is. The very first thing they ALWAYS do is take away our rights! Look at the natural disasters that have occurred like hurricanes or floods and the first thing these tyrants do is to confiscate all weapons from the citizens! They cannot help themselves and their bottom line is that they know better than we do.

Every time there is a crisis or public emergency, it reveals who the left really is.

So do the police, sheriffs, and National Guard.

Their appearance on the ‘Mother In-laws” was a real gas.