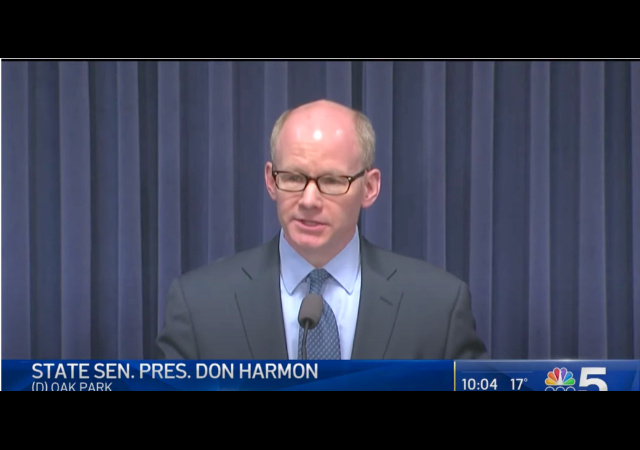 Never let a crisis go to waste! Americans have died and continue to suffer under an economic shutdown due to the Wuhan coronavirus.

Illinois Senate Democrats decided to use the crisis as a way to receive federal aid, but not for the people of the state.

They want federal aid to bail them out of their financial crisis caused by useless spending and bloated government.

Illinois Senate President Don Harmon pleads to Sen. Dick Durbin (D-IL) to fight for $41 billion in federal aid. He sent the letter to the state’s delegation, too.

“I realize I’ve asked for a lot, but this is an unprecedented situation, and we face the reality that there likely will be additional, unanticipated costs that could result in future requests for assistance,” Harmon wrote in a Tuesday letter to members of the state’s congressional delegation.

He is not wrong. The pandemic is causing many states and cities to lose money.

Harmon tried to justify his demands by stating the aid already received went to “costs directly related to the COVID-19 outbreak.” But now the federal government has not addressed the “negative effects to state and local economies across this country.”

Yes, Harmon wants the federal government to give Illinois $15 billion to help the state spend more for the next 2.5 years.

Pensions drag down Illinois. Harmon notes in his letter that the state’s “largest liabilities are its unfunded pension liability at $138 billion and other post-employment benefits liability at $54 billion.”

Harmon forgets that it is not the federal government’s responsibility to bail out state governments. This especially applies to corrupt and wasteful states like Illinois.

I mean, the CARE Act sent $2.7 billion to Illinois along with $2.2 billion to local communities.

On Saturday, Gov. J.B. Pritzker said he “was not aware of the content of the letter” before Harmon sent it:

“There’s no reason why a senate president in Illinois can’t send a letter to the delegation. I don’t object to people communicating with our federal representatives. I do it all the time,” Pritzker said.

“It’s different than what I have been talking to the federal representatives about,” he continued. “I really believe the state’s need to have some unencumbered dollars that come in that will help us with the coming year’s budget — every state has this problem.”

In a statement, Pritzker’s office said: “We’re working with our congressional delegation, as well as [House Speaker Nancy] Pelosi and [Senate Minority Leader Chuck] Schumer, to ensure another aid package includes funds for the state of Illinois and the flexibility to use them in our budget.”

How about you stop spending?! This is a great opportunity to go through the Illinois budget and cut wasteful spending. Illinois never has money in its rainy day fund.

Karma is crazy, isn’t she, Harmon? I knew the out of control spending and corruption would eventually bite my state in the butt.

Then again so did everyone except these tone-deaf legislators in Illinois.

Il has played this game for decades.

Useless spending on their most useless residents, useless from cradle, to jail … loop … to grave.

I live in Illinois–the place is a mess. The Democrats continually expand programs while being unable to pay for what’s in place now. I suspect that the Governor thinks he’s not going to be able to persuade the voters to pass his next tax bill, so this is his way to get the money they want. If they get this money, they’ll just continue to spend blindly and punish the successful.

And no one believes that the Senate President sent this without the Governor’s knowledge.

No doubt, JB probably got it but perhaps he ate it.

IL is bankrupt, time to move…

The new marijuana czar makes 220k a year. And we expect the rest of the country to bail us out.
If PDJT gives these spendaholics anything-IL voted for hrc- it will be not only a political error but a betrayal of the conservative base that elected him.

And there is the other shoe, all the states begging for a federal bail-out. NEVER! Our federal government is entirely bankrupt.

Mike Madigan, the long time Czar of Illinois tells Governor Fred Flinstone every move to make. Madigan has driven the State into Billions of $$ in Debt. Madigan sees this as an opportunity to bring fresh money into Illinois to keep the Democrats paid.

That’s the problem. Even if we get rid of Governor Lardass, nothing with happen until we also get rid of King Madigan.

Madigan is 78 – he looks 88. How much more can he steal before the Feds catch up with him? Hopefully the latest Fed wire case on the Midway Airport Expansion project will cast a wide net and land Ed Burke and his pals in jail.

These politicians need an intervention, not help spending more of other people’s money. They truly don’t care.

As a resident of Illinois, I’m surprised there aren’t more about Governor JB “Mark’s Big Boy” Pritzker & his cronies aren’t in a Legal Insurrection. What a state to show how bad this country will be with more democrat control.

Once again, the spineless Republicans cave. No balls. Those McConnell fund-raising e-mails citing how slim the GOP advantage is in the Senate is not exactly worrying me. There is almost no difference between Dem and Rep senators. Swamp rats all. I’d like to see most of the sitting GOP senators replaced.

Texas taxpayers should subsidize the corruption in Illinois?

The taxpayers in any state should subsidize the corruption in Illinois? There, FIFY. 😉
.

Chicago, really – downstate people (well, just about anybody outside the collar counties) are decent. That’s the real Illinois – red, conservative, salt of the earth. The problem is there are too many dead voters in $#!+cago.

Maybe the legislators & bureaucrats could divert their cuts to the pension & benefit funds… Nah!

At least the guy was swinging for the fence. $10 Billion for the Illinois Pension fund… but seriously, no thank you. I have my own business to fix that has been forced to close since March 18 and counting.

Illinois is a deserved basket case–its corruption exceeds even those of the African states that are its close twins including demography–paying taxes here is equivalent to tossing money down the sewer. Outside of Chicago (parasite center) the state has almost no Red China virus cases, but continues to be locked down by its Democratic governor–tubby who made his fortune by being born–in hopes of a total economic breakdown that will usher in the socialist paradise.

I am so glad I left Illinois the day after graduating high school!