President Trump froze World Health Organization (WHO) funding for “mismanaging and covering up the spread of the coronavirus.” 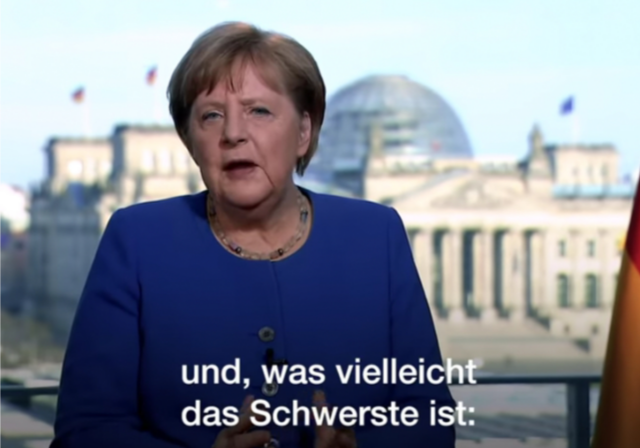 President Donald Trump announced a 60-day freeze on the U.S. funding going to the WHO, the United Nations’ health agency, for its incompetence and deceptive handling of the Wuhan coronavirus outbreak. “Today I’m instructing my administration to halt funding of the WHO while a review is conducted to assess the WHO’s role in severely mismanaging and covering up the spread of the coronavirus,” Trump said on Tuesday while freezing of funding worth $500 million going to the UN agency.

The UN agency has been accused of being Beijing’s accomplice in covering up the origins of the contagion. Right from the onset, the WHO has been passing on official Chinese propaganda as global health advisories, thereby hiding the true nature of the life-threatening virus which originated in China.

German Chancellor Angela Merkel has thrown her support behind the World Health Organization (WHO) as it tackles the devastating novel coronavirus pandemic, government spokesman Steffan Seibert said on Thursday.

“The chancellor stressed that the pandemic can only be defeated with a strong and coordinated international response,” said Seibert. “To this end, she expressed her full support for the WHO and numerous other partners.”

Merkel’s comments were made during a video conference call with G7 leaders, just a day after US President Donald Trump announced he would suspend funding for the UN health agency. (…)

The move was widely criticized in Europe. German Foreign Minister Heiko Maas said the funding freeze amounted to “throwing the pilot out of the plane in mid-flight.”

“It makes no sense at all to question the functioning and significance of the WHO now,” Maas said. He described the WHO as a the “backbone of the fight against the pandemic.”

Since the contagion first appeared in the central Chinese city of Wuhan, the WHO has been busy parroting Beijing’s official talking points and praising the Communist regime for its handling of the pandemic. On January 14, the WHO declared that it “found no clear evidence of human-to-human transmission” citing official Chinese sources. This was one of the deadly falsehoods peddled by the UN agency about the Wuhan virus, as we all painfully found out.

While Germany, the European Union, Canada, and other members of the G7 industrial nations backed the WHO in the wake of the U.S. response, Australia came out against it. Lawmakers of Australia’s governing coalition called for a review of the country’s $64 million funding going to WHO. Australian Prime Minister Scott Morrison and the country’s Foreign Affairs Minister Marise Payne shared the lawmakers’ concerns regarding the UN body’s mishandling of the pandemic, the newspaper Sydney Morning Herald reported.

Since the creation of the WHO shortly after the Second World War, the U.S. has been its biggest benefactor. “For the two-year budget cycle of 2018 and 2019, the U.S. government pledged to contribute $893 million to WHO’s budget,” the NPR reported. The Bill & Melinda Gates Foundation has emerged as the biggest non-state player funding the UN agency in recent years, pledging $531 million during the same period.

Absolutely. They want it, they can pay for it. Like NATO.

Turn that crooked thang up on her end and you read
“MADE IN CHINA.”

Tucker Carlson blasts China for their coronavirus cover up.

How could they NOT know #covod19 was contagious via human to human contact.

We ALL saw it play out on the news back n Nov/Dec.

Shame on ALL of them. Folded hands Flag of United States

Maybe that pic is of the Dictator loving NYC mayor….

Mayor De Blasio: Here’s How You Can Report On Your Neighbor
How to Communist, by Bill de Blasio

Firewatch in reply to notamemberofanyorganizedpolicital. | April 18, 2020 at 3:17 pm

It’s going to take some tequila to get that awful thought out of my mine. The top is bad enough, but her bottom must be ewwwwwwwwwww!

Wow, what a sunrise. A person, Stazi-trained, who backs the NWO supporting one of the stepping stones to that end. She also supports the EU, an other stepping stone. Along with every one of the organizations who will take us to the NWO, mostly especially the UN and its countless alphabet-shorted agencies like the WHO which will bring us all to world government.

You might even think she actually read and internalized Richard Gardner’s The Hard Road to World Order.

Yeah Angie, you say you support them but show me the Deutschemarks.

Time to rethink our involvement with NATO. Time to cut Cruella de Ville off at the knees.

I think Vlad has been too naughty this year to deserve such a gift.

The head of the WHO, Tedros Adhanom Ghebreyesus, was an official in the Derg, the Marxist dictatorship of Ethiopia which used famine as a weapon of war to suppress its opposition. He must be a good politician since he managed to survive the collapse of the Derg and the dictatorship of Mengistu Haile Mariam.

notamemberofanyorganizedpolicital in reply to Chuckin Houston. | April 18, 2020 at 3:04 pm

Merkel is his sista…….

“the pandemic can only be defeated with a strong and coordinated international response,” said Seibert. “To this end, she expressed her full support for the WHO and numerous other partners.” … “It makes no sense at all to question the functioning and significance of the WHO now,” Maas said.

The problem with this logic is that the contribution of some of these “partners” is likely bring more harm than help. Specifically, a basic principle here is that incorrect (but especially deliberately misleading) information is a greater harm than no information.

Therefore if WHO has been identified as a source of bad (and likely deliberately misleading) information then giving it no role (and therefore no funding) until/unless it reforms itself remains a better option than enabling it to cause further harms.

What else can we expect from this corrupt maggot.

PULL OUR TROOPS OUT OF GERMANY. Let them pay for their own “health care system” that WE pay for by defending them against the Russians.

The Krauts need to rush through a € 3billion WHO rescue package.

Trump was not my first choice, but I’m in favor of his cutting off contributions to WHO. Most UN agencies are do-nothing bureaucracies whose first order of business after a disaster is to bicker for a few months over first class hotel accommodations for their leading staff.

In any case, Tedros Adhanom Gebreyesus tarted out as a dutiful servant of Mengistu Hailemariam’s Derg, remained a Marxist, urged close economic cooperation with China (for how much?), and covered up three cholera outbreaks in Ethiopia while health minister. He ended up heading WHO due to Chinese diplomacy. His threats to the USA and initial parroting the Chinese government’s line show how he is in the pocket of the world’s last, best hope for 20th century totalitarianism.

Merkel needs to focus on the break-up of the EU or as I call it, the second collape of the Soviet Union. The EU was Stalin’s dream for the part of Europe that escaped the Iron Curtain. Now that too has collapsed. Well done Angela!

Strange how the commies stick together.

So Frau Merkel, all ya gotta do is increase your funding for this [insert Yiddish word for useless here] orginization by 398% to $144.9 mio. USD per year and every little ting gon’ be alright, mon.

Given that you spend so little to support NATO—which exists solely to protect you and your feckless EU pals from the bad guys—I’m sure you can afford an extra $115.8 mio. USD for WHO. After all they do such good work. Heh.

It is mindless drivel coming from this left wing lunatic who has probably spelled the end of Germany with her open borders policies.

When you have an organization like the WHO which has been wrong far too much throughout this pandemic, you have to take a look at funding it still. The actions to cover up for and repeat propaganda from China shows the organization is now doing what it is supposed to. This just seems like a globalist wealth grab, like the UN has become, with American taxpayers paying far too large a share.

If Merkel is for something, my go to opinion is to be against it. She has the track record to say she is wrong far more often than she is correct. Calling her “conservative” when just about every thing she stands for is the opposite, doesn’t make it so.

He also cut funding for abortion chambers (e.g. selective-child a.k.a. planned parenthood) and Mengele clinics (e.g. cannibalized-child). Will Germany step into the breach?

Don’t be surprised when she supports the “party line”…

Trust Angie to always be wrong.

If she like them so much, she can give away millions of other peoples’ money.

Any group with “world” or “international” or “united” as part of it’s name is almost 100% anti-American and yet funded by the Americans.

Stop spending a dime on these groups, and get our military out of Europe, especially Germany, the home of the Nazi’s.

China and Russia have been bending the UN and the WHO to their will for many years. China is now a member of the Human Rights committee of the UN, in spite of running concentration camps for Uighurs.

Trump is simply using the best leverage we have to bend the UN and the WHO back to being respectable world organizations instead of pawns of Russia and China. He will restore funding if and when they throw out the bad actors and start acting like neutral representatives.

Great need for the United Nations! The country whose actions made the need for a global peace organization supports a phony health outfit. This way the largest economy in Europe can step up and start paying for it.

Well, her visions of world government via the EU are crumbling a bit, so she’s gotta put those aspirations somewhere.

Instead of platitudes Merkel step up to the podium with money to pay the bills for World Health Organization.

Instead of platitudes Merkel step up to the podium with money to pay the bills for World Health Organization.

Strangely, nowhere in the article do I see mention that Germany is going to pick up the slack and replace the funding that Trump has frozen from the US.

Strange that. It’s almost like this is nothing more than an empty political move rather than a genuine, concrete measure of support.

Actually, I should have said “empty virtue signalling” rather than political move. That would have been more accurate.