Berlin to “start easing lockdown measures, with some businesses and schools set to start working on May 4.” 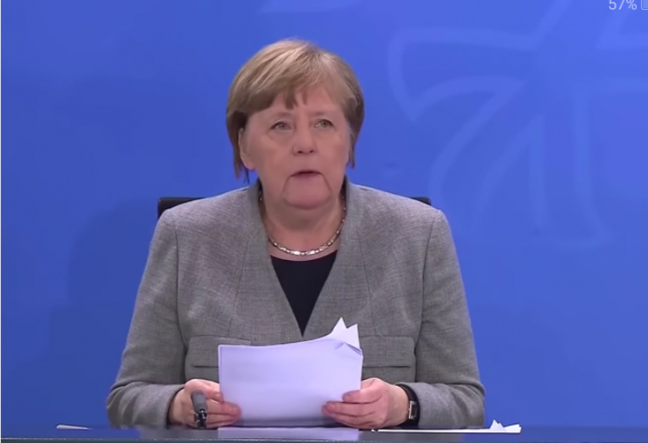 German Chancellor Angela Merkel on Wednesday rolled out a ‘”road map” for easing the nationwide lockdown aimed at curbing the spread of the Wuhan coronavirus. With the number of new infections and deaths starting to come down, Berlin wants to relax restrictive measures placed on public life and commercial activities.

As a first step, the government will open schools and most shops on May 4.

Merkel’s decision comes a day after neighboring Austria lifted its coronavirus restrictions. Vienna allowed the opening on ‘non-essential’ business after the Easter weekend. Addressing the nation on Monday, French President Emmanuel Macron also announced a gradual reopening of the county starting May 11.

Germany placed sweeping nationwide restrictions on March 22, including the closure of all businesses except supermarkets and pharmacies. Schools and colleges also shut down plus a ban on gatherings for more than two people.

Germany’s Angela Merkel announced a plan to start easing lockdown measures, with some businesses and schools set to start working on May 4. At the same time, the social distancing is set to stay in place and Germany’s government will “strongly recommend” to people to wear face masks while grocery shopping or in public transport.

People in Germany would still be required to keep a 1.5 meters (5 feet) from each other and gather in groups no larger than two, unless they were members of the same household, she said.

Merkel is issuing a televised address and update on the government’s plans, after talks this afternoon with state government leaders and other relevant politicians from around Germany.

Merkel’s decision coincided with the reports that Germany is heading into a deep recession following the coronavirus-induced lockdown. The economy expects to see close to 10 percent GDP slump on the current quarter (April-June) and more than 4 percent this year, the German business daily Hendelsblatt reported. Germany, Europe’s largest economy, was already in recession before the outbreak.

The rest of Europe has also taken an equally hard economic hit from the outbreak as well. According to the EU officials, the eurozone economy is estimated to shrink by 10 percent this year. “A drop in economic productivity not seen since the global economic crisis of the 1920s,” the officials claim.

EU Commission President Ursula von der Leyen, who heads the bloc’s executive arm, also came out with her own plan to ease lockdown across Europe. In a separate article Deutsche Welle detailed the EU’s policy:

EU Commission President Ursula von der Leyen is unveiling on Wednesday her road map for lifting coronavirus restrictions across the bloc. In a 14-page document laying out her ideas, von der Leyen says that “although it is clear that the path back to normalcy will take a long time, it is also obvious that we cannot maintain these extraordinary restrictions indefinitely.”

She says lockdowns across the continent had proven effective, yet also precipitated a tremendous economic shock and placed a heavy burden on public life. (…)

The life-threatening virus, which originated in central China, has crossed 2 million cases in about three months. With the end not yet in sight, over 137,000 people have died of the contagion worldwide so far, the data from Johns Hopkins University shows. Besides the substantial human cost, the pandemic has had a crippling effect on the global economy. The Wuhan virus could cost up the world $9 trillion, D.C.-based International Monetary Fund estimates. It has forced billions of people into social and economic lockdown, including many in the developing countries subsisting on meager daily wages.

Man, it’s tough when you have a person like Merkel looking to restart the economy vs. some USA governors hoping they can keep it going forever.

Those governors are in their final bunker.

OnPoint in reply to notamemberofanyorganizedpolicital. | April 17, 2020 at 2:38 pm

That’s an accurate way to describe it. Little Hitlers, all of them.

Perhaps the Grundgesetz für die Bundesrepublik Deutschland isn’t above her pay grade like it is for some US Governors.

May 4? She’s certainly not moving at a gallop, there.

If the German beauty parlors were to reopen and Ms. Merkel were to patronize one or more the world would be a better place.

Does lipstick really beautify the hog?