Editor of Germany’s biggest newspaper to China’s President: You are endangering the world

Editor of Germany’s biggest newspaper to China’s President: You are endangering the world

“You plan to strengthen China through a plague that you exported. You will not succeed. Corona will be your political end, sooner or later.” 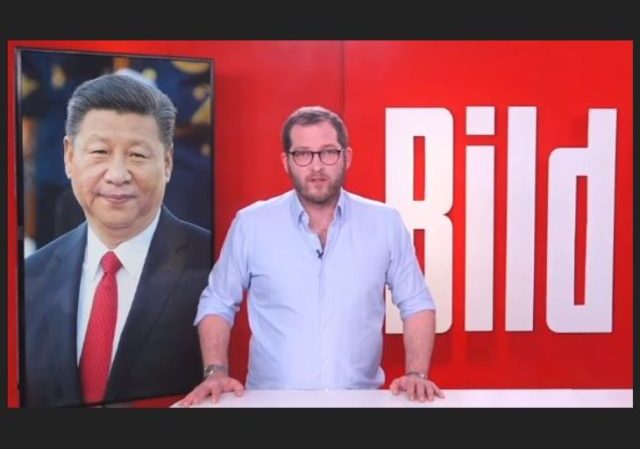 Bild is the largest circulation German newspaper. (English language website here.) It ran an article calling on China to make reparations for the spread of the Wuhan coronavirus. The total was 149 billion Euros: 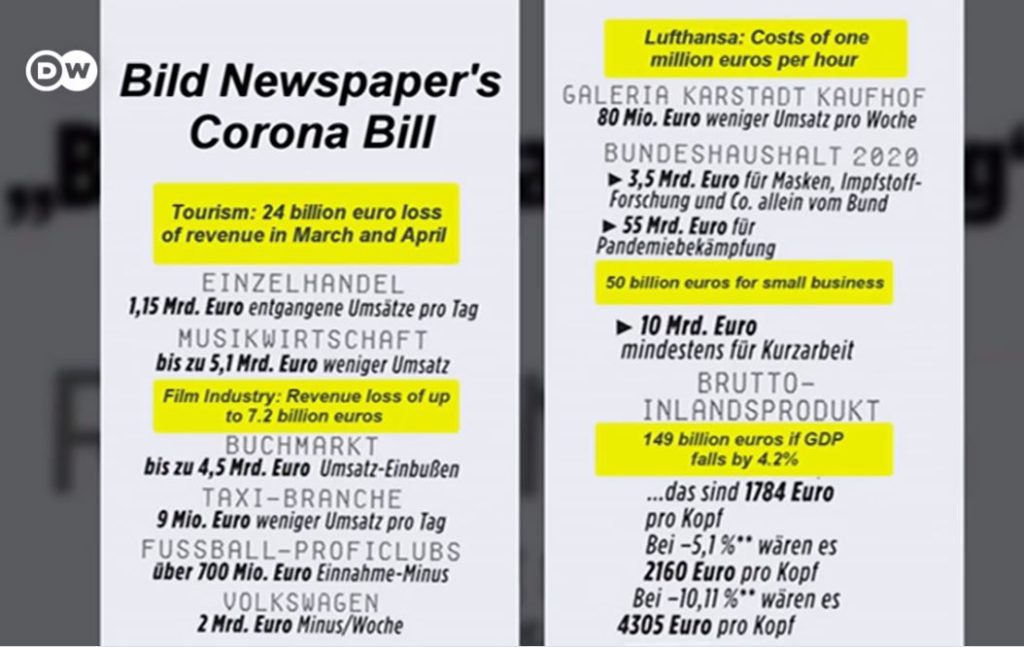 Had the Chinese Ambassador sent such a letter to almost any U.S. major publication, the reaction would be one of capitulation for fear of being shut out of the Chinese market. That’s what Bloomberg did when it spiked its story about corruption by senior Chinese officials.

Fortunately for Germany and the world, Reichfelt reacted with an open letter back to China’s President Xi Jinping. There are so many plain truths that the U.S. mainstream media, obsessed with getting Trump, refuses to say. 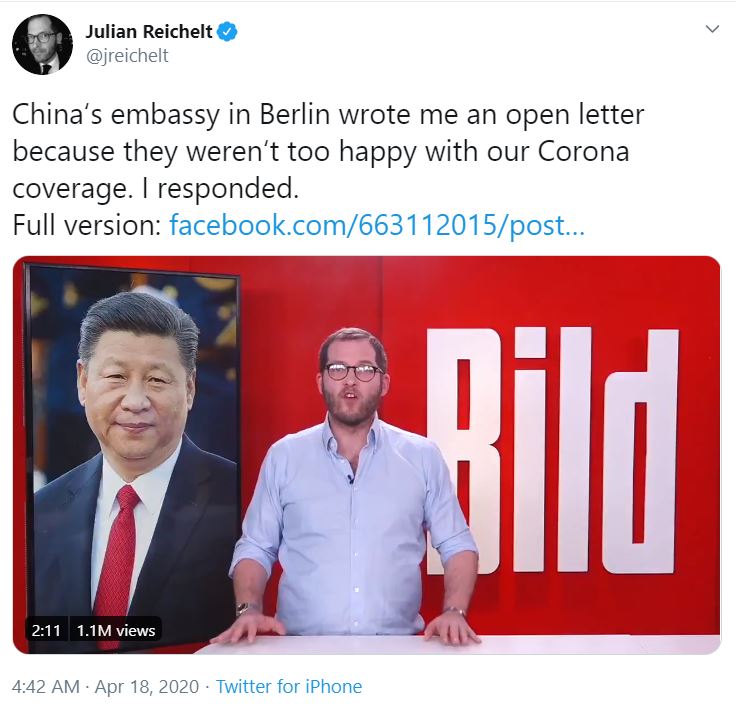 The open letter text is below. Here is Reichelt’s delivery on camera:

Here is the text (emphasis in original).

Your embassy in Berlin has addressed me in an open letter because we asked in our newspaper BILD whether China should pay for the massive economic damage the corona virus is inflicting worldwide.

You shut down every newspaper and website that is critical of your rule, but not the stalls where bat soup is sold. You are not only monitoring your people, you are endangering them – and with them, the rest of the world.

2. Surveillance is a denial of freedom. And a nation that is not free, is not creative. A nation that is not innovative, does not invent anything . This is why you have made your country the world champion in intellectual property theft.

China enriches itself with the inventions of others, instead of inventing on its own. The reason China does not innovate and invent is that you don’t let the young people in your country think freely. China’s greatest export hit (that nobody wanted to have, but which has nevertheless gone around the world) is Corona.

3. You, your government and your scientists had to know long ago that Corona is highly infectious, but you left the world in the dark about it. Your top experts didn’t respond when Western researchers asked to know what was going on in Wuhan.

You were too proud and too nationalistic to tell the truth, which you felt was a national disgrace.

4. The “Washington Post” reports that your laboratories in Wuhan have been researching corona viruses in bats, butwithout maintaining the highest safety standards. Why are your toxic laboratories not as secure as your prisons for political prisoners?

Would you like to explain this to the grieving widows, daughters, sons, husbands, parents of Corona victims all over the world?

That is your political legacy.

Your embassy tells me that I am not living up to the “traditional friendship of our peoples.” I suppose you consider it a great “friendship” when you now generously send masks around the world. This isn’t friendship, I would call it imperialism hidden behind a smile – a Trojan Horse.

You plan to strengthen China through a plague that you exported. You will not succeed. Corona will be your political end, sooner or later.

Merkel could have held China to account as well, but she was busy opposing Trump at all costs.

Message to merkel and the the other jerkels around the world:

You got Trump or Xi.

Pick one. Then shut up.

I will be very interested to see how Bild fares after this.

notamemberofanyorganizedpolicital in reply to Wisewerds. | April 19, 2020 at 11:09 pm

Makes me think of exposes on Alex Jones of what the communist Chinese do to Westerners………..

Wisewerds said
> I will be very interested to see how Bild fares after this.
I wonder if Herr Reichfelt will disappear or “commit suicide” some time in the next couple of weeks.

The Bilde response to the Chinese embassy doubles as refutation of Merkle and her coalition government.

If he had written this to Hillary we’d be reading his obituary.

the Germans are little more subtle, put him in a mental institution

How about a live kitten?

Pow!! Right in the kisser!!

The editor didn’t mince words did he?

He must not use Grammerly.

That should make Mike Bloomberg feel small (er)! 🙂 Glad that there is one European with backbone and honor.

There was a typo in the article, he meant 149 trillion.

Germany murdered 6 million Jews vs. the CCP murdering 50+ million of its own.

I despise the germans, but let’s give credit where credit is due, as it is here.

“Despising” an entire population puts you in the same category as other genocidal maniacs. I am sure you realize that.

F off Carl. I have a whole family full of men that had to go over to Europe and Japan to fight off the despots.

The Japanese have made amends. The germans as a country continue to rip off the USA as a result of our good will. Are there some good germans? Of course, many. I know them. But as a country they continue to choose badly. They support murderous regimes like Iran.

So yes, damn right I despise them. The only thing genocidal about that is the person that refuses to see the truth when laid bare before their very eyes.

Populations are not created equal, some are smarter, some are dumber. Some are hard workers and earn prosperity, others are not.

Take palestinian’s as an example of a people who are collectively hopeless. The same is true of Africa.

It is not our fault that evolution in large part did no treat some people kindly. That is not the fault of those who were dealt a better outcome.

A little seventh-grade arithmetic shows how absurd the Chinese reported COVID numbers are. A nation that does not care about human life would not shut its economy down for months over almost nothing unless things were far more serious than reported.

That is pure gold. The Chinese surveillance is so intrusive that each resident has a social score that goes up and down depending on his/her obedience/loyalty to the CCP. (See: China has started ranking citizens with a creepy ‘social credit’ system — here’s what you can do wrong, and the embarrassing, demeaning ways they can punish you . https://tinyurl.com/y87pne6a )

One would have to “willfully suspend disbelief” in order to accept that the CCP was not completely aware of not only what had happened in Wuhan, but what not shutting down travel immediately.

However the virus was introduced into the population, the CCP knew full well what they were doing when they permitted 2 months or more of domestic and international travel following its release.