“Why can’t she just sit down, she’s always acting like a fool up there in Lansing,” 13th District Democratic Party Chair Jonathan Kinloch said. 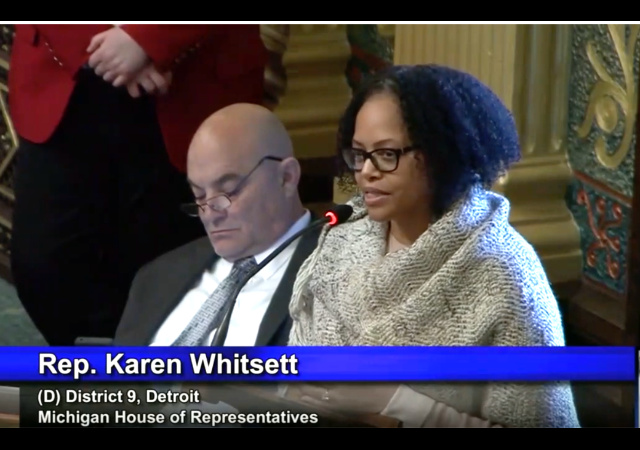 Earlier this month, Michigan state lawmaker Rep. Karen Whitsett (D) revealed she had been diagnosed with the Wuhan Coronavirus, and noted that her doctor had prescribed hydroxychloroquine, a drug that President Trump has often touted as a treatment for the virus.

At the time, Whitsett told the Detroit Free Press that “it was less than two hours” after she began taking it that she began to feel relief from the symptoms she had been feeling, which included shortness of breath and swollen lymph nodes.

Whitsett also credited Trump for her recovery, telling the paper that “It has a lot to do with the president … bringing it up.”

Trump congratulated Whitsett in a tweet the same day the Freep’s report was published.

She was also a guest on Laura Ingraham’s program on Fox News, where she talked about her recovery.

Apparently crediting Trump, appearing on Fox News, and attending a Trump-led White House gathering a week later that honored Wuhan Coranavirus survivors was too much for Detroit’s 13th Congressional District Democratic Party Organization, who have decided to vote Saturday on censuring Whitsett and barring future endorsements of her:

State Rep. Karen Whitsett, D-Detroit, broke protocol by meeting with President Donald Trump and Vice President Mike Pence during an April 14 meeting of COVID-19 survivors, during which she credited hydroxychloroquine for saving her life.

The group, as first reported by Gongwer News Service, plans to vote Saturday on a resolution to censure Whitsett, a first-term lawmaker representing the 9th Michigan House District.

The admonition means she will not get the group’s endorsement for this year nor will she be able to engage in the group’s activities for the next two election cycles.

The Detroit News extensively quoted group chairman Jonathan Kinloch, who claimed the organization had been unhappy with Whitsett since February, when she accused Michigan House Democratic Leader Christine Greig of racism and claimed Greig punished her staff over a vote on a no-fault auto reform bill.

Whitsett, the paper notes, has not only been critical of Democratic Gov. Gretchen Whitmer, but she’s also pushed back on local Democratic criticism of her remarks crediting Trump, so much so that Kinloch and the rest of the 13th Congressional Democratic group summoned her Sunday to a multiple-candidate screening for her house district.

When she reportedly refused, Kinloch got very upset, according to the Detroit News:

“Don’t play with us,” Kinloch said. “This is very serious when we ask to have a conversation with you and you choose not to.

“We’re not going to accept that. How they handle you in Lansing as far as the Democratic caucus that’s on them. But how we handle you back at home, that’s on us.”

Breitbart News interviewed Kinloch, who went on to mansplain about how Whitsett should just sit down and shut up:

“Folks in the 13th were complaining about why is she attacking, why can’t she just sit down, she’s always acting like a fool up there in Lansing,” 13th District Democrat Party Chairman Jonathan Kinloch told Breitbart News.

Kinloch said her medical treatments “are between her and her doctor,” but the party’s beef with Whitsett is that she was critical of party members, namely Whitmer.

Here is, in part, what the resolution states:

State Representative Karen Whitsett has repeatedly and publicly praised the president’s delayed and misguided COVID-19 response efforts in contradiction with the scientifically based and action-oriented response from Michigan’s duly election Democratic leadership … endangering the health, safety and welfare of her constituents, the city of Detroit, and the state of Michigan.

Whitsett blasted the party for their attempts at punishing her, tagging President Trump in a tweet to get his attention:

@realDonaldTrump this what the Democractic party is doing to me for saying ”thsnk you” @LeeChatfield @jkin5022 pic.twitter.com/k5ud8CfYeI

He hasn’t yet responded, but Donald Trump, Jr. weighed in earlier:

What a joke. Remember folks, the narrative can only be against Trump and if you break those rules the left will turn on their own.

To say the group’s treatment of Whitsett has been appalling would be a gross understatement. I can’t imagine that even in an alternative universe it would be acceptable for any political figure who had survived a deadly disease to be censured simply for crediting someone from the opposing party for opening the door to the treatment she credits with saving her life.

Keep in mind, too, that two of Whitsett’s relatives died from the Wuhan Coronavirus, and one of Whitsett’s Democratic colleagues in the statehouse also died from it last month. Whitsett’s husband was also diagnosed with it and took hydroxychloroquine for treatment. So this is obviously something very personal for her, very life-altering.

As all this has played out, 13th US House District Rep. Rashida Tlaib has been strangely silent. It’d be nice to think that maybe even she understands that playing politics in the middle of a pandemic, as her colleagues in the 13th district Democratic organization have shamelessly done, is not a good look. But considering she’s played politics on her Twitter feed throughout the pandemic, that’s obviously not the case.

This is one of those times where I suspect people are hoping Trump will amplify the issue on his Twitter feed. Maybe that, and the pushback Kinloch and the rest of the Democrats who are on board with this idea receive, would make them reconsider.

You’re to commit harikari by COV-19 than to speak well of Trump.

Removing all doubt that the Democrat Party is a cult.

It seems to me that if she and her husband benefited, then many other blacks, a group which for a multitude of reasons, from genetic to cultural, have been suffering a high death rate. How many black people have been saved as a result of Trump speaking out on this issue?

notamemberofanyorganizedpolicital in reply to JusticeDelivered. | April 23, 2020 at 9:35 pm

guinspen in reply to notamemberofanyorganizedpolicital. | April 23, 2020 at 10:38 pm

What “genetic” reason do you refer to, sir?

Quite unlikely. In order to be acceptable to the Detroit D political machine she would have had to have been possessed with all the “right opinions” on the all social/social justice/economic issues. These would have been acquired over years, all from the perverted view of Democrat politics. These ideas are not shed quickly or easily.

She’s grateful for her new lease of life, realizing that she had been at death’s door. DJT mentioned something that might help, and she acted on his suggestion. That’s a far as I would expect this go. If I’m proved wrong, and the scale fall from her eyes and she realizes the facts of life and the Democrat Party has been disastrous for blacks for >70 years, that’d be great. But don’t count on it.

I’m a little more hopeful for the black GA rep, last known as a Democrat, since, it appears, he came to see the benefits that DJT has brought to blacks. It seems some of the scales had fallen from his eyes.

Perhaps there’s a place for her in DC? An appointment? Would send a message to fence sitting / centrist Dems.

That is what I was thinking.. She actually demonstrated some integrity.

Can’t be letting any of these Black folk start getting too uppity, where they start to forget their proper place in the natural order of things and assume that they’re allowed to think for themselves.

Why, next thing you know, they’ll begin to conclude that they’re allowed to leave the Dixiecrat Plantation and be able to take care of themselves.

We just can’t let that happen. No sir, no way, no how.

Old time there are not forgotten.

Didn’t mean to downvote your post. Just wanted to remind black Americans if you leave the plantation they’re going to put y’all in chains.

“We’re not going to accept that. How they handle you in Lansing as far as the Democratic caucus that’s on them. But how we handle you back at home, that’s on us.”

I found this very bold (aka stupid) and interesting statement about ‘handling’ someone to be revealing. And they say Trump lacks a filter. It’s a shame that the media won’t take the lefty cultists to the mat for this shameful behavior.

Nice to see the left keeping on with their hatred, even against their own party members.

The left are truly mentally ill, all they have is hate and failure. That just doesn’t sound like a winning ticket to me.

I keep wondering what drives this evilness (and Chamber Republicans and RINOs are included). And I think the answer is money. Union money, welfare money, race money, education money, crony capital like useless windmill/solar farms, defense contracts that produce nothing for years on end, EPA fines for some but not others, …the Democratic Party is a party of leeches and crooks. They produce nothing…but live off the backs who do.
“Shovel Ready Jobs” that not even Obama could find a single example of……$1T and not a road built that was not already budgeted.

Anonymous sources told me that an anonymous official told them Nancy Pelosi said, “They just don’t know their place anymore.”

Fascists are fascists, and often eat their own.

As for the pot calling the kettle black, check out that nut passing herself of as a psychiatrist at yale:

Narcissists are a deluded, dangerous bunch.

How does this person still have a license??

So when is she going to announce she’s changing parties?

the republican party has a ton and I mean a ton of material for political ads for the next election, the only problem they are going to have is will the media carry them

Won’t matter. We will.

Nothing too petty for #theResistance.

Nothing too petty for #theResistance.

Look, everyone knows that hydroxychloroquine was designed for White people. It only helps light-skinned or conservative Blacks.

The MI Democratic Party has some real creeps in charge.

This situation certainly gives you an idea why it is so hard for a Republican to win a statewide election in Michigan even when the State House and Senate have large majorities of Republicans. It also shows you how an idiot like Whitmer can win.

Whitmer and the Dems have only one job and that’s to get Trump and Gary Peters elected. The only way to do that is to tank the economy, kill as many Detroiters as possible and pin it to Trump with non-stop ads paid for by Hollywood and East Coast Leftists. The coastal Dem masters spent over $30 million to turn two House seats in 2018. Just think how far they will go to turn Michigan for Biden.

African American, John James, Jr. is running against a useless fat white dude and yet the racist Dem Party that can censure this woman will paint the war hero businessman as a lowlife idiot. Imagine Rashida Talib trying to convince black folks in Detroit that Peters is their man.

Jonathan Kinloch, proving he is a Slave to the Plantation owners ,,, the DemonRats. “Yes Sir Boss, Yess Sir” ,,, Wake Up Fool !!!

After believing that she is free–because that’s what she was always taught–Ms. Whitsett wanders to a place she hadn’t been before and discovers, to her shock, that the world she knows is surrounded by a tall, strong wall.

She has lived all her life in the Democratic Black Plantation and never knew. Break through, Ms. Whitsett. You have friends on the other side!