Democratic National Convention Postponed to August 17 Due to Coronavirus Concerns

Democratic National Convention Postponed to August 17 Due to Coronavirus Concerns

Thursday, the DNC announced it was postponing the Democratic National Convention to the week of August 17. The convention was scheduled for July 13-16. The convention will still be held in Milwaukee.

From the Milwaukee Journal Sentinel:

It’s unclear how many days the convention will run as planning remains in flux.

The announcement came in a news release Thursday from convention organizers.

“After a great deal of scenario planning and giving thought to how it is this event can have the greatest impact in the electoral process and the greatest impact in terms of what we can bring to Milwaukee, we felt the best decision, not knowing all the answers, was to delay this,” Democratic National Convention CEO Joe Solmonese told the Journal Sentinel.

“After checking with hotels and venues and Fiserv, we determined the week of August 17 was the best week to move it to,” he said.

“More than anything we continue to monitor the public health landscape,” Solmonese said.

The move effectively sets off a logistical scramble to accommodate the thousands of delegates that will descend upon Milwaukee to nominate the Democratic ticket that will take on President Donald Trump in the fall.

The move was signaled  Wednesday by Democratic frontrunner Joe Biden who told Jimmy Fallon of the “The Tonight Show,” “I doubt whether the Democratic convention is going to be able to be held in mid-July or early July. I think it’s going to have to move into August.”

Biden added: “We were able to … in the middle of a Civil War all the way through to World War II have Democratic and Republican conventions and primaries and elections and still have public safety. And we’re able to do both. But the fact is it may have to be different.” 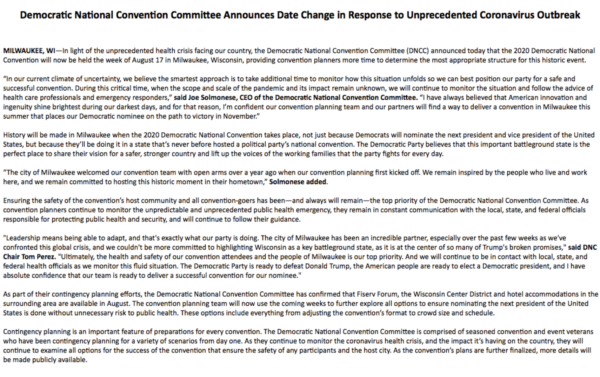 Just yesterday, Mike blogged about the ramifications of pushing the DNC back, especially in an election year where they’re very likely to get walloped.

More time for that knock on the door to come from the Don of the Democrats. Joe you are gone. We putting Andrew in the game.

I hope they don’t say to Biden remember Jeffrey Epstein. Because he won’t remember.

But he remembers The Alamo because he was, you know, there.

I don’t think cuomo is going to get past the nipple-ring scandal.

Why? Cardboard, if kept dry, lasts a long time.

Joe – remember to write the new date and location in your notebook. And remember where you put it!

(Apologies – sometimes they just have to be recorded quick and dirty …)

“But I know it has something to do with money. Money to me, that is. See, I’ve never had a private sector job. I’ve always lived at the expense of the taxpayers. And getting that public paycheck – for a job as a legislator that allows me to write laws telling what others they can and can’t do – has allowed me to become quite wealthy. Thanks, suckers.”

Postpone or cancel? It not as if Biden or any other Democrat candidate is a viable choice.

More time for the Bernie Bros. to hope for Biden to “veer off course”

In passing, if Joe Biden says:

Biden added: “We were able to … in the middle of a Civil War all the way through to World War II have Democratic and Republican conventions and primaries and elections and still have public safety. And we’re able to do both. But the fact is it may have to be different.”

My “where is biden hidin?” signs aren’t being removed from the display windows of otherwise empty newspaper boxes. A snot stain in the corner does wonders. 😉

notamemberofanyorganizedpolicital in reply to MajorWood. | April 2, 2020 at 4:56 pm

They can hold the convention when and wherever they want.
The candidate has already been selected. DNC will reveal the name when the time is right. The name will not be “Joe Biden”.

I wonder if the old fool knows he’s been played.

Biden now has more time to heal from his elective brain transplant surgery.

So the Dems postpone their convention to August when, if Fauci is correct, the Wuhan virus will have ebbed to its low point only to reappear in the fall which is when the Republicans have their convention.

Also, Fauci was on CNN yesterday apparently frustrated over why every state hasn’t issued “stay at home” orders. Is he setting up a shut down of Trump’s convention?

Whose side is he on? I think Mark Levin is spot on about how there is no one allowed to speak up in protest about how our economy is being systematically shut down. I believe we hit the tipping point with the monstrous “relief” bill and now we can expect yet another even bigger boondoggle? Massive infrastructure spending? How about letting people get back to work?

I just don’t like deferring to doctors to make economic decisions. NOTHING would be worse than collapsing our economy into the arms of socialism. We have fought very costly wars to defend our freedom. We can’t afford not accepting some risk when the very survival of our constitutional republic is at stake. Come on Trump. Step up to the plate and do the right thing.

Killing the economy by telling the entire country to stay home is not the solution. How about trying ordering the wearing of face masks in public first? They may not be effective in protecting us from inhaling the virus but I’ll bet they are very effective in preventing us from exhaling it.

I’m going to start referring to “the Fauci Rule”:

If even one life is saved by destroying the economy, it is worth it.”

Here’s another problem with a national lock down:

Couldn’t happen here? Governors are emptying our prisons while trying to stop the sale of guns. And if Trump doesn’t rein in Fauci, law-abiding citizens will probably be confined to their homes. Where do people think this is heading?

Now they gotta keep Joe alive another five weeks. I really don’t know if he’s going to make it.