Dem Sen. Chris Murphy blames Trump, Not China or WHO, for coronavirus crisis

Dem Sen. Chris Murphy blames Trump, Not China or WHO, for coronavirus crisis

Murphy tried to absolve China and the WHO of wrongdoing, but inadvertently confirmed a point made by Dr. Birx about how China’s deceptive early data helped shape the U.S.’s initial response to the Wuhan Coronavirus outbreak. 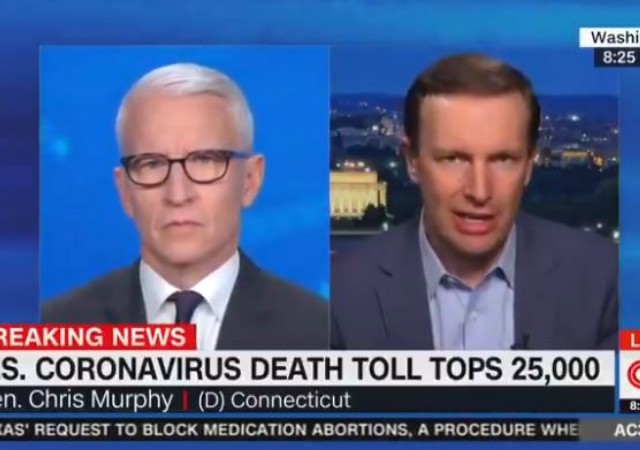 The worst thing about the Wuhan Coronavirus, obviously, is the number of people who have become sick from it and the number of lives lost around the world.

The second worst thing about it is that both China and the World Health Organization lied about its origins and transmission method. Their dishonesty and lack of transparency about the disease severely hampered efforts in the countries who got it afterward, like the United States, to get a firm handle on it despite the actions taken by the Trump administration early on like the China travel restrictions.

But perhaps the third-worst thing about the Wuhan Coronavirus is in how it’s brought out the inner China apologists in both the media and the Democratic party (but I repeat myself).

The latest example of this comes from Sen. Chris Murphy (D-CT), who appeared on Anderson Cooper’s show earlier this week to bash President Trump’s response to the Wuhan Coronavirus crisis. A widely shared clip from the interview shows Murphy putting the full blame for the outbreak here in America on Trump:

"The reason that we're in the crisis that we are today is not because of anything that China did"pic.twitter.com/9EskhdFQvb

“When you talk about could we have known something different, you know, I think all of us — I mean I was overseas when this happened, in Africa, and I think when you look at the China data originally, and you said, ‘Oh well, there’s 80 million people, or 20 million people in Wuhan and 80 million people in Hubei,’ and they come up with the number of 50,000, you start thinking of this more like SARS than you do this kind of global pandemic,” she said.

The coordinator then explained that the medical community was not expecting the magnitude of the pandemic based on the data from China. In particular, she referenced the area in which the virus likely originated, Hubei province, for having “close quarters” and implied that the number of cases reported by the country led medical experts to believe the virus was less contagious.

“So, I think the medical community interpreted the Chinese data as this was serious but smaller than anyone expected, because I think probably we were missing a significant amount of the data,” Birx continued, noting that U.S. officials have a better idea of the virus after following its spread in Spain and Italy.

In other words, it’s easy for the media and Democrats like Murphy and House Speaker Nancy Pelosi to do Monday morning armchair quarterbacking when it comes to the virus. The U.S. understands a lot more about it now than they did when they were formulating their response to it because China and the WHO both ultimately proved themselves to be untrustworthy.

Preliminary investigations conducted by the Chinese authorities have found no clear evidence of human-to-human transmission of the novel #coronavirus (2019-nCoV) identified in #Wuhan, #China??. pic.twitter.com/Fnl5P877VG

These new reports suggest Xi himself was involved in this decision to lie about human to human transmission.

Meanwhile a United States Senator is lying about China’s role so he can attack the President. pic.twitter.com/qNtyNFkhhL

Let’s get back to the Murphy interview with Cooper. In addition to falsely claiming that President Trump called the virus “a hoax,” which Cooper, of course, did not correct, Murphy said something else during the interview that directly contradicted his claim that China and the WHO were not to blame for the crisis we are in today.

In the video clip at this link, which unfortunately is not embeddable, Murphy was talking about Trump pulling the WHO’s funding and his criticisms of China after Cooper mentioned that Trump had praised the WHO and China early on:

“Well, pulling money out of the WHO has nothing to do with keeping America safe. It’s all about the president’s attempt to try to find scapegoats. Let’s be clear. Early on in this crisis, there was no bigger cheerleader for China and their response to coronavirus than president Donald J. Trump. It was President Trump who on 12 different occasions praised President Xi’s efforts to control coronavirus, specifically praised China’s transparency, which we now know was a complete joke.”

In those comments, Murphy proved Dr. Birx’s point and contradicted his own. Yes, there was praise early on for the WHO and China because the United States was not aware as to the extent of their deception behind the scenes. To reemphasize an earlier point, it was their lack of transparency early on that hamstrung the efforts of many countries, including ours, to understand the full scope and scale of this disease.

China’s under-reporting of case numbers was and is especially crucial here, considering in a country of over 1.4 billion people their case numbers in February were in the 70,000-80,000 range, with reports emerging then that they were manipulating the numbers. In mid-February, senior administration officials in the United States were beginning to talk about how they did “not have high confidence in the information coming out of China” regarding the numbers of cases they were reporting.

That Trump is blaming China for this crisis is not a new development, contra to Murphy’s, and Cooper’s claims that Trump is only “now focusing” on them in an attempt to deflect blame. Trump has been calling this virus the “Chinese virus” for weeks for a reason.

The lack of any sense of statesmanship in the Democratic Party is beyond reason. This has been covered up for years by the likes of this Cooper fellow. Trump, a notorious poor winner and an equally poor loser, looks like Winston Churchill compared to the Democratic loons.

When I look at the sum total of the situation, it seems likely that that China intentionally lied to cripple the West’s economy. Even the most charitable interpretation of events indicate at a minimum complete disregard for others. Personally, the shear number of cascading events makes me think that China needs to be severely punished, and even if that is not the case, we need to greatly lower our dependence on China, and that will mean much less cash flow for China.

notamemberofanyorganizedpolicital in reply to JusticeDelivered. | April 17, 2020 at 11:53 pm

Old Chris needs a communist Chinese drone on his ass.

“The drones, donated by DJI, a Chinese company, have gone to 43 agencies in 22 states, all to help enforce social distancing rules.”

Oh, and DJI “may be sending data to China”

We think DJI is “providing US critical infrastructure and law enforcement data to the Chinese government.”

And now local law enforcement is using them in response to the Chinese virushttps://www.nytimes.com/2017/11/29/technology/dji-china-data-drones.html …

A drone made by D.J.I. in a demonstration at the company’s headquarters in Shenzhen, China, last year. The company said accusations by the Immigration and Customs Enforcement agency that it shares sensitive information on American infrastructure with the Chinese government were false.

These Dhimmi-crats are vile fabulists. Utterly vile, dishonest and without shame.

The Dhimmis were distracting the entire country with their utterly ridiculous sham-peachment coup/stunt/farce, while China — abetted and enabled by useless, feckless puppet, the WHO — was letting this plague spread around the globe, without any modicum of transparency, warning, etc., to other nations.

And, to top it all off, in the midst of defending himself from the contrived sham-peachment allegations, POTUS still had the prescience and common-sense to impose the China travel ban, which — naturally — the Dhimmi-crats all indefensibly and foolishly, opposed, as being allegedly “racist.”

The Dhimmi-crat apparatchiks should shut all of their miserable mouths — their record of fecklessness, stupidity and incompetence vis-a-vis the Wuhan virus, is painfully clear. They don’t have a leg to stand on, in criticizing POTUS in this matter.

What is it about Rhode Island and Connecticut? Neither one of them has sent a decent Senator to Washington since Joe Lieberman. You’ve got Da Nang Dick Blumenthal (stolen valor but he forgot to steal any brains) Sheldon Whorehouse–and now this little nipper. Jackasses all.

I am embarassed to live in Connecticut with a senator like Murphy.

Blumenthal is a known liar but he has an IQ. Murphy not only lies but is also known to be one of the dumbest people in the Senate, or any other legislative body.

Maybe we can send him on a taxpayer paid junket to China–one way ticket of course.

which unfortunately is not embeddable

sure it is, it even provides an iframe embed code for the jwplayer.

the admins on THIS site have not allowed it.
be accurate when saying stuff like that to those who have run websites and media servers.

Another blog I read based in CT had a thread on Murphy. A commenter there who calls himself Balzac made an incredibly astute comment that I cut and paste here. So, not my own observation, but I wholeheartedly concur, as would anyone else who knows Murph.

“Chris Murphy is a lawyer. He has never spent a day in the private sector and has never even served as a lawyer. He went straight from law school into politics and never left. He brought exactly no knowledge of the economy and no international experience to his role in our government. But he seems very impressed with the wisdom of Chris Murphy”

In other words, Chris Murphy is a smooth talker with minimal merit.

Connecticut, WHAT were you thinking? Now you are represented by Wuhan Chris as well as Da Nang Dick! You are who you vote for. You should be ashamed of yourselves, your friends and family surely are.

It’s not so much thinking as it is the ungodly plethora of academia for such a small state combined with being situated between NYC & Boston/Rhode Island that’s only few left that even know how to think anymore.

Trump should have known that when CCP’s veil of privacy was lifted, there was a clear and progressive global threat festering in plain sight.

Well, to be fair, the contagion vectors: globalism, immigration reform, political congruence/correctness, collusion, were observable and documented. The rule of thumb is, with cause, moderation in order to mitigate progress of catastrophic anthropogenic [political, social, health, etc.] climate change.

The Big Lie theory at work.

Only fascists use it.

Connecticut, land where I was born, a place where I shall never reside again.For obvious reasons.