Coronavirus has caused the majority of Americans to pray

Coronavirus has caused the majority of Americans to pray

“Large majorities of Americans who pray daily (86%) and of U.S. Christians (73%) have taken to prayer during the outbreak – but so have some who say they seldom or never pray and people who say they do not belong to any religion (15% and 24%, respectively).”

According to a survey released by Pew Research Center, 55% of people polled have prayed for an end to the Coronavirus pandemic and 57% of respondents reported tuning into Church online.

More than half of all U.S. adults (55%) say they have prayed for an end to the spread of coronavirus. Large majorities of Americans who pray daily (86%) and of U.S. Christians (73%) have taken to prayer during the outbreak – but so have some who say they seldom or never pray and people who say they do not belong to any religion (15% and 24%, respectively).

Among U.S. adults who said in an earlier survey they attend religious services at least once or twice a month, most (59%) now say they have scaled back their attendance because of the coronavirus – in many cases, presumably because churches and other houses of worship have canceled services. But this does not mean they have disengaged from collective worship entirely: A similar share (57%) reports having watched religious services online or on TV instead of attending in person. Together, four-in-ten regular worshippers appear to have replaced in-person attendance with virtual worship (saying that they have been attending less often but watching online instead).

And in chart form: 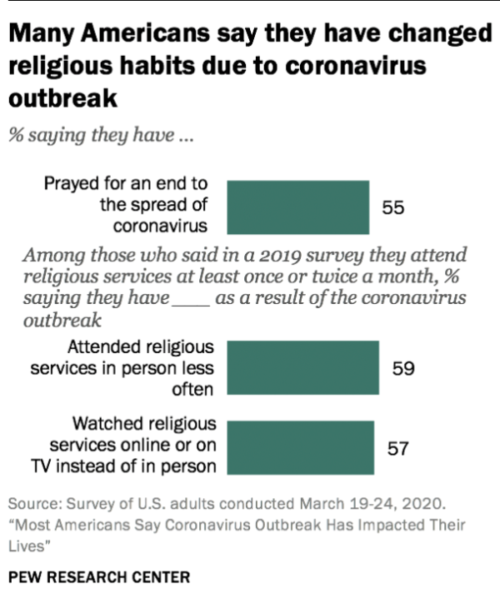 According to the Washington Examiner, online searchers for prayer have also increased dramatically.

Prayer. So much prayer. I love it.

Comrades, again we note – our voluntary transponder devices (cell phone, FitBit etc) are being used by government officials to monitor our ‘stay-at-home’ coronavirus compliance. It only takes one slight flip of the government switch, or a carefully worded executive order, to turn that innocuous data into a personal penalty (civil fine)….”

TheFineReport.com in reply to notamemberofanyorganizedpolicital. | April 2, 2020 at 12:00 am

Prayer is best when coupled with action.

notamemberofanyorganizedpolicital in reply to TheFineReport.com. | April 2, 2020 at 4:37 pm

Don’t credit God for good weather and then pretend the virus is a celestial orphan.

Who’s pretending that? There wouldn’t be much point in asking Him to remove it if He had nothing to do with sending it in the first place.

I see the pagans are out in force tonight — dualists who believe there is a good god and a bad one, so they can blame everything they don’t like on the bad one and attribute everything they like to the good one. But G-d is one, and nothing happens in the world without His will. “Do not the good and the bad come from the Highest?” “He forms light and creates darkness; makes good and creates bad.”

The pastor’s wife at a previous church we attended talked about how her grandfather got assigned some other unit just before DDAY and exclaimed “Isn’t it amazing how God is watching out for us?”

I politely resisted the urge to ask her if she thought God abandoned to poor fuckers running into machine gun fire on the beaches during the invasion.

Some may find God during this. I’ve seen too much nasty shit happen to the best souls to think in simple terms.

Statements like “All glory be to you God” frankly piss me off. If that were the case we could all sit on our ass and never be accountable for anything.

No, God did not abandon those poor fuckers. He assigned them to that duty and to their fate, just as He assigned the pastor’s grandfather-in-law to a different unit and to life; and He was with them as they fought and took them to Him as they died. None of us can know why He decides who should survive any given event and who should not, but we must know with certainty that He does, and those whom He has spared ought to thank Him. “They shall thank G-d for His kindness and for His wonders to people.” Remember that none of us will be spared forever; sooner or later He will decide to take us, but when He says “not yet” we should be grateful.

Well … I think He allowed us to have free will …

He gave us free will over our own decisions, not over what happens to us. We don’t decide whether to live or die; He does.

Seems hypocritical to blow off God when times are good but to go running to him when you want something.

Isn’t that exactly how we treat our physical parents? It may not be right, but it’s natural. And it’s certainly how we’ve always treated Him. Psalm 78, for instance.

But that’s often how it starts … stuff goes wrong and ya start to pray … then stop … and that pattern will be repeated. Once ya pray long enough it becomes a “practice” and ya find yourself doing it in both good times and bad.

That’s what coming to God is often about: “come to Jesus moments”.

Kind of like our pathetic young narcissist population, who have been protected, babied, sexualized and brainwashed by teachers who are the most malignant, corrupt hacks this nation has ever produced.

Well, no better teacher than adversity: between the crisis in our world and their being out of the clutches of corrupt rats brainwashing them, our pathetic young have never had such good teaching as they are getting now. Let’s not go backwards.

Bigoted, perhaps. It’s also part and parcel of a learning and growth process (“evolution”). Hopefully, with a functional fitness function.

functional as in productive, perhaps “good”.

Prayer, yes. Also, remember God’s directive: be fruitful and multiply, and make the world yours. The advice is to recognize a separation of logical domains. Science (i.e. near-domain philosophy and practice) is a utility to understand and respond to this world and make it ours.