Also names Provost and Faculty Council President. Alleges he “has suffered censorship, injustice, persecution, and humiliation” after writing pro-Israel, anti-BDS column in The Federalist in April 2019. 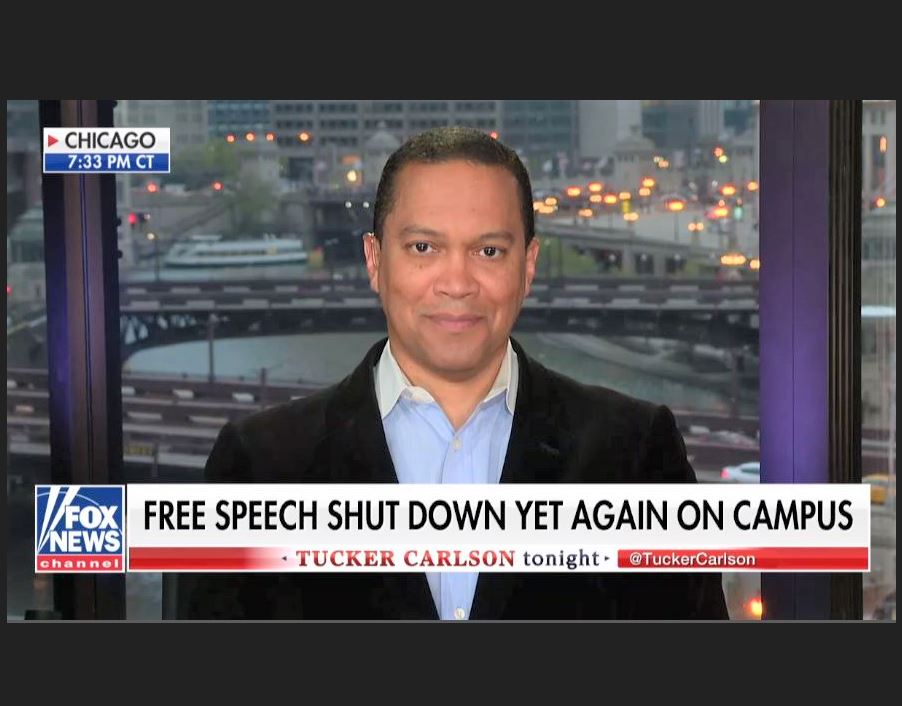 Jason Hill is a professor at DePaul University in Chicago who came under attack by student activists and faculty after expressing pro-Israel, anti-BDS (Boycott, Divestment and Sanctions against Israel) views.

We covered the story in early May 2019, DePaul University Faculty Condemns Professor Who Expressed Support for Israel:

The Faculty Council at DePaul University passed a resolution condemning professor of philosophy Jason Hill after he wrote an article in The Federalist in support of Israel and condemned Hamas.

Hill wrote that “Israel has the moral right to annex all of the West Bank (even Area C) for a plethora of reasons.” The article offended Muslim students and some faculty, which caused protests and a demand for censure….

Hill told Tucker Carlson on Fox News Wednesday night that no one will silence him. He made it clear that the censure is because he took “a very positive pro-Israeli stance in a very anti-Semitic culture on college campuses that are pushing for BDS movement and divestment against Israel and I’m a conservative independent who speaks his mind very clearly and will not be silenced.”

We have not covered the story since then, but Hill has continued to be in the news because of the attacks against him and his continued advocacy for free speech on campus.

On April 20, 2020, Hill filed a lawsuit in Circuit Court in Cook County, Illinois, for defamation against DePaul University, Provost Salma Ghanem, and Scott Paeth, the President of the DePaul Faculty Council at the time of the resolution.

The lawsuit is reflected on the electronic court docket. 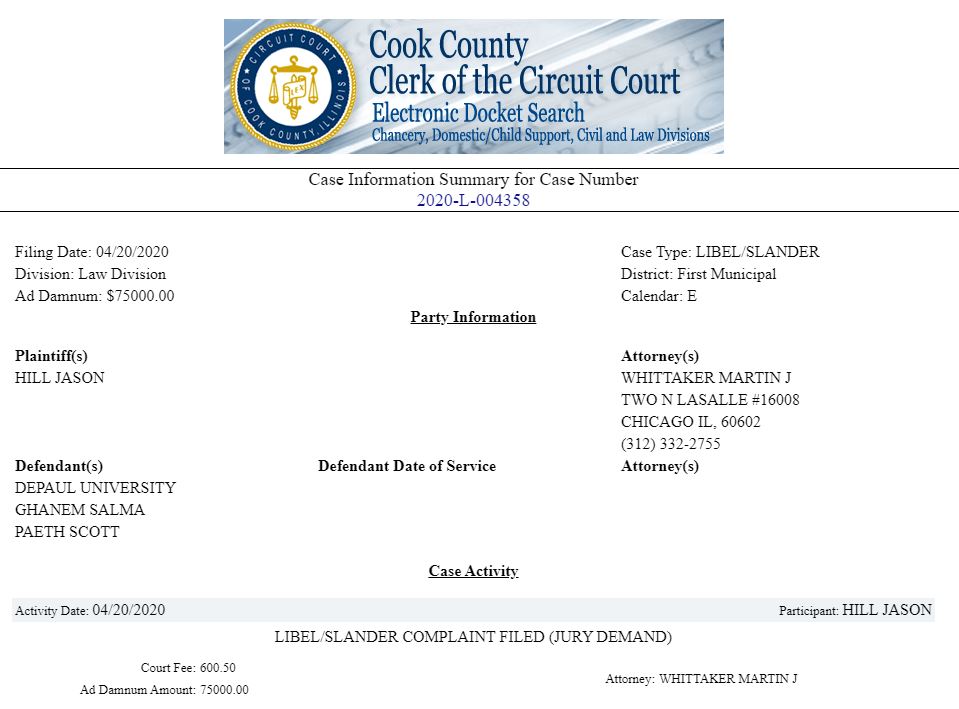 The Complaint (pdf.) is available on the Westlaw electronic service. 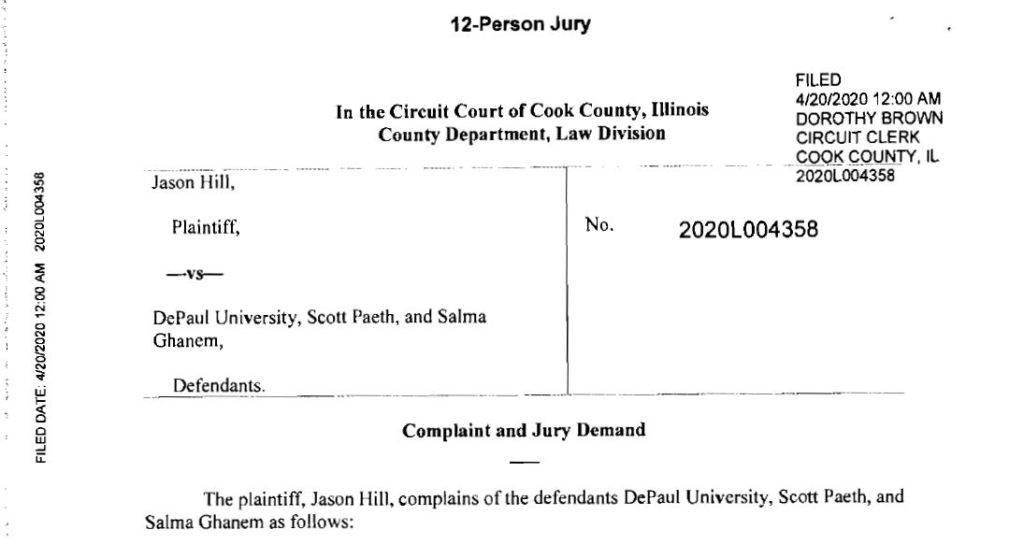 The Complaint alleges, in part:

1. This case is about a tenured professor who freely spoke his mind. Plaintiff Jason D. Hill is a Distinguished Professor of Philosophy at Defendant DePaul University. Last year, Dr. Hill wrote an article commenting on the dispute between Israel and Palestine. His opinion— protected by the time-honored principle of academic freedom for professors—was nothing new or shocking. But to a powerful faction in the university community, Dr. Hill picked the wrong side of the debate. And for that, Dr. Hill has suffered censorship, injustice, persecution, and humiliation.

2. Accordingly, Dr. Hill brings this action seeking an award of damages to vindicate his contractual and due process rights, clear his name, and compensate him for the defendants* inflicted pain, humiliation, and agony.

The Complaint goes on to detail the alleged abuses, and causes of action for:

87. Dr. Hill has accomplished all of the administrative pre-requisites to filing additional claims in this Court alleging violations of the Illinois Human Rights Act and Title VII of the federal Civil Rights Act, having filed a timely Charge of Discrimination (Exhibit I) and Opt Out Request Form (Exhibit J) with the Illinois Department of Human Rights. He has not, however, yet received the Notice of Right to Commence an Action under those statutes from the Department. He will add additional claims by way of amendment to this Complaint after he receives that Notice from the Department.

Hill’s demand for relief is as follows:

Wherefore, the Plaintiff, Dr. Jason Hill, prays for damages to be awarded to him against the defendant DePaul University, defendant Scott Paeth, and defendant Salma Ghanem in an amount sufficient to compensate fully for the damages he has suffered. The Plaintiff, Dr. Jason Hill, further prays for an award of punitive damages to be awarded against all defendants for their defamation, and for their intentional, malicious interference with Dr. Hill’s prospective advantage as DePaul faculty member and public intellectual, against each in sufficiently large amount to deter similar conduct in the future.

I reached out for comment to the university and individual defendants, but as of this writing have not received a response.

Best of luck to Dr. Hill. Agree with Tucker, the actions of hysterical children. And that’s what runs our colleges these days.

I hope Dr. Hill wins and takes this school, that denies him his constitutional rights, for a ton!

This is how you do it!

You can be sure corrupt leftist schools across the nation are shocked by the oberlin fiasco.

What are his chances of success? I hope he wins big.

Depaul University, a Jesuit school, is by far the most anti-Israel and antisemitic school in Chicago (outside of any NOI school). Shame — especially since the same people who drive out and slaughter all Christians in the Middle East.

It is a tragedy what has happened to the faculties of some of the nations’ Catholic colleges.

DePaul University, where I earned my bachelor’s degree, was founded and is run by Vincentians, not Jesuits. The Vincentians are an order of priests and lay brothers founded by St. Vincent DePaul.

Depaul University, a Jesuit school, is by far the most anti-Israel and antisemitic school in Chicago (outside of any NOI school). Shame — especially since the same people who drive out and slaughter all Christians in the Middle East.

Apparently hating Israel is higher on the PC pecking order than support for POC and gays. Don’t we constantly hear that POC are under-represented on the faculties of colleges across the country? Apparently only POC who subscribe the progressive agenda count. The rest shall be run off campus as if they were Ben Shapiro or Charles Murray.

The truth is that colleges all over America are so screwed up that they are unworthy of educating our children.

many years ago a friend was promoted from a VP to head a company we had just acquired. The company’s ROA was about 1%. He had to do those hard things which must be done when a company is bloated and unprofitable.

So I bought a hatchet, painted the metal body flat black, labeled one side NOP, the other ROA, and the used a two part bright red catalyzed epoxy to coat the cutting edge, complete with a hardened drip to look like blood.

I then shipped it to him with a note, “From the desk of….

Difficult jobs are easier, when you have the proper tools.”

A few years back First Things Magazine selected DePaul as the least Catholic college or university in America.

Whatever happened to academic “freedom”?

While it’s not at all clear from this article just how these attacks against the professor played out, I have to wonder how much those attacks themselves ought to be protected by the principles of freedom of speech. There are certain areas of “liberal” politics in which violation of their standards are unforgivable… sexual crimes, for example, lead liberals to condemn not just the vile act itself, but every undertaking of the perpetrator, rendering his entire personal and professional life subject to rancorous rejection. The same phenomenon appears to occur among “conservatives”, when a breach of one of their key values subjects the perp to irremedial condemnation. Abortion? Kill the subject and all her supporters for advocating women’s personal freedom to make a terrible painful decision between paupery & abortion.
I’m strongly supportive of Israel and her advocates. And I bitterly resent those who misrepresent and even lie about the Middle East for the various reasons which drive such malicious behavior. But I really have to wonder how we can have productive civil discourse if so many purportedly rational human beings are shrilly screeching and so few are actually conducting reasonable discussion and debate.
Perhaps democratic, civil society is, in fact, unachievable and the obstacle is defective human nature, unevolved to appropriately blend with modern technological achievements?

Said it before. Going to be funny and sad when Jews find their safe spaces are Baptist churches and NASCAR events.