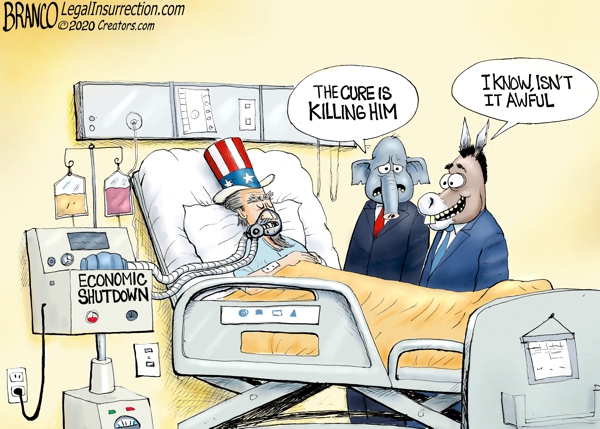 A side panel should show the radical Dems raiding his bank account, with the caption “It’s for his own good!”.

This year has provided A.F. plenty of fodder. And as always he rises to the challenge.

It’s hard to wrap my head around our country surviving with any success when about half the country wants the US to go up in flames and despises everything about our country and it’s people….and they are successfully importing millions of people a year who feel and think the same way.

The goats on the left won’t always be with us. Sadly, it will take a divine power to separate and dispatch them to where they belong. 😉

Hmmm … just noticed … it’s “HIS right” … but doesn’t use the possessive form “HIS left” – could be another acknowledgement that goats belong to another? There’s no doubt during the judgment.

notamemberofanyorganizedpolicital in reply to MrE. | April 6, 2020 at 3:29 pm

We are witnessing that right now.

That’s it… I said elsewhere that the economic shutdown is really an induced coma.

I’m still waiting for the class-action lawsuit against China.
It will most likely be the first asking for more than $1 trillion.

China has it’s hand in all this, but the media and globalists are right there with them.

Look at the utter incompetence of Cuomo, who did nothing to prepare ahead of time to needs he knew about, yet cries non-stop now. And the shutting down of everything due to panic induced by the media and the actions of Pelosi and the attempted theft of public funds for her wish list.

China should pay a big amount, but the media and the left in this country shouldn’t get off scott free either.

What court would have jurisdiction over a sovereign nation?

Perhaps one of the finest all time political cartoons.

Yeah, that really sums things up pretty well! That look of absolute glee on the Donkey’s face is infuriating, especially because we know it’s true of so many of them!

notamemberofanyorganizedpolicital in reply to smalltownoklahoman. | April 6, 2020 at 4:27 pm

Democrats aren’t even pretending to put up crocodile tears. They’re absolutely giddy at the potential destruction that might spur their progressive agenda.

notamemberofanyorganizedpolicital in reply to clayusmcret. | April 6, 2020 at 4:27 pm

Stung, weakened, and steadily losing the ability to stay afloat, the Frog now asked the Scorpion, almost incredulously, “How could you, why do this? I trusted you”.

“It’s simply a function of what I do, it’s really just who I am,” admitted the Scorpion without much reflection as he watched his newly helpful aide — who had carried the replying, venom-delivering creature on his back across the wide lake to safety, for the sake of a more perfect jungle, the Frog fantasied and even against his better judgment — slowly die a lowly amphibian’s outsmarted, albeit law-of-the-jungle-ordered death.

Ancient Aesop saw it all, with all his insight: Nature’s laws are supreme, and we, too, are but a mere part of Nature in this, its jungle.

So, substitute these fabled figures for the ones in Branco’s cartoon. The elephant should have known better than to entrust the good Uncle’s well-being to the wiles of the donkey as well; but the critically ill patient — American society and its practically unrivaled economy — can still escape the threat of the inappropriate, patently toxic response, the present treatment, led by the Left-run and -aiming, expert-dependent and -delegating Dems. America is already paying more than is reasonable and just.

(Yes, when reason and equity operate unimpaired, victims are not expected to pay for the sins and hurtful offense of others.

Perhaps it’s the ChiComs who must pay the US — not, in the neo-Marxists’ view, the US’s own society via its economy, in all its ordered liberty — for all the damage the Party and its government have apparently visited upon our nation, for one, in their possibly negligent conduct in relation to the Wuhan-centered debacle.

We need to be made whole, and we ourselves are not to blame for the present, socially and economically disintegrating calamity the world chooses, so reductively and anesthetically, to call COVID-19.)

Stand up to tyranny, Uncle Sam. Altogether and strong, you’re America. You’ve been here before.