Barr: Russia-Collusion Investigation Into Trump’s Campaign ‘One of the Greatest Travesties in American History’

Barr: Russia-Collusion Investigation Into Trump’s Campaign ‘One of the Greatest Travesties in American History’

On the origin investigation: “My own view is that the evidence shows that we’re not dealing with just the mistakes or sloppiness. There was something far more troubling here.” 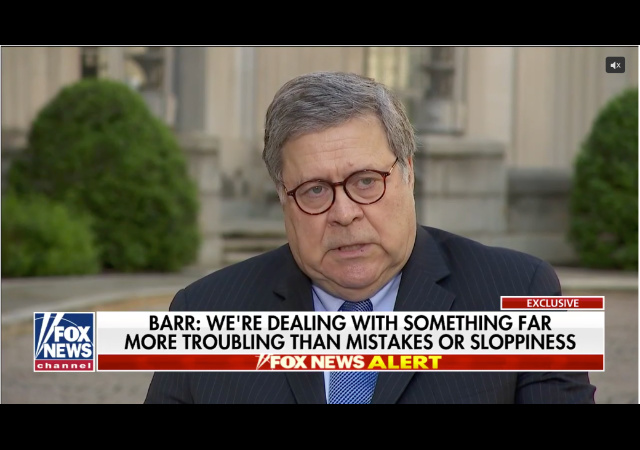 Attorney General William Barr described the investigation into possible Russia-Trump collusion as “one of the greatest travesties in American history.”

Barr also said U.S. Attorney John Durham’s probe into the origins of the investigation has revealed some “troubling signs.”

“My own view is that the evidence shows that we’re not dealing with just the mistakes or sloppiness,” Barr told host Laura Ingraham. “There was something far more troubling here. We’re going to get to the bottom of it. And if people broke the law and we can establish that with the evidence, they will be prosecuted.”

Trump “has every right to be frustrated” by the investigation, Barr added.

“What happened to him was one of the greatest travesties in American history — without any basis,” Barr said. “They started this investigation of his campaign. And even more concerning, actually, is what happened after the campaign. A whole pattern of events while he was president … to sabotage the presidency … or at least have the effect of sabotaging the presidency.”

Barr lashed out at the FBI abusing the Foreign Intelligence Surveillance Act (FISA):

During Thursday’s show Barr also addressed what he described as abuse of the Foreign Intelligence Surveillance Act (FISA), saying he believed “safeguards” would “enable us to go forward with this important tool.”

” I think it’s very sad and the people who abused FISA have a lot to answer for,” he said, “because this was an important tool to protect the American people.

“They abused it. They undercut public confidence in FISA but also the FBI is an institution and we have to rebuild that.”

He does realize that Trump has a finite term in office?

What about omar’s immigration and election crimes, for example????

AG Barr has a once in history chance of either (1) rescuing America from institutional corruption and treason that will destroy it, or (2) furthering the destruction.

More Kabuki theater…Wake me up when the indictments come down.

Big Deal. Just another statement from another worthless Attorney General. When RINO Barr actually gets off his ass and stops protecting the democrats and actually takes action I’ll want to hear about it. Otherwise, why waste electrons on such a loser RINO.

Time to investigate communist China and their bought and paid for u.s. media and u.s. politicians.

nothing but blabber, alert the media when you are actually going to arrest some people, you can always dismiss the charges later.

“And if people broke the law and we can establish that with the evidence, they will be prosecuted.”
That right there is the tell for what will or rather won’t happen. Sorry folks, just not enough evidence, even though Barr gave a pass on other abuses such as “lack of candor” and so on.

It will be not dissimilar to Comey laying out the crimes Hillary did then claiming no prosecutor would touch the case.

At a minimum, it’s an admission that, even after all this time spent investigating, he doesn’t think he has enough evidence to prosecute anyone. He probably never will, but like Q he wants us to keep thinking it will be any day now.

The principal principle behind it all,

Will John Brennan Get Away With It?

That is classic bureaucrat talk. We do not need any more bureaucrats and bureaucracy agencies.

Not good news for open Barr.

How conservative media has grown under Trump

I’m hopeful there’s similar goings-on behind the scenes in Russia-gate, FISA-gate, etc. No doubt one reason for the incessant clamor over Covid is to drown out any potential report of wrongdoing …

Stop telling us what we already know.
Start arresting people.

Unfortunately, with President Trump effectively communicating the latest information on the federal efforts to mitigate COVID-19, more corporate U.S. resistance media have decided not to carry the live broadcasts from the White House task force briefings.- the last refuge

Instead of airing the President all my local network affiliates are shoving a made up FAKE loco production.

A Slut City is its nickname for good cause.

D on April 10
President Trump is handling this masterfully.

He was put in a tenuous position at best.

Most of the government agencies have “ had a go “ at taking him down.

The CDC May indeed be their last chance.

They have failed spectacularly.

Tragic that so many have lost their jobs or businesses.

PDJT has been balancing a tightrope, all the while hyenas have been yapping at his heels.

All the while running the most powerful nation in the free world.

Here today as I type this he gives the nation a lesson in oil markets, while jousting with the MSM slim

There must be penalties for the misdeeds committed. It should be quicker than years. President Trump could easily end his second term before any defendants see a trial. Way too much “running out the clock.”

notamemberofanyorganizedpolicital in reply to Romey. | April 10, 2020 at 2:36 pm

Sorry meant the 22nd cause that drives leftists even more crazy.

But now that you bring it up a change to a mandatory regular election as part of the 25th would be a good thing.

Disclaimer: I am not a constitutional scholar nor play one on tv.

Milhouse in reply to notamemberofanyorganizedpolicital. | April 13, 2020 at 5:40 pm

Water Closet progresses, but not in the direction that Obama, Biden, Clinton, foreign and domestic agents, and journolists would hope.

Let me know when they’re going to shoot Obama for treason.

traitors get the noose.

wake me up when someone is indicted…

until then, it’s all kabuki theater.

Barr said the department has 110,000 employees.

There’s no reason why enough can’t be assigned to make this happen swiftly with whatever budget it requires.

If it’s more time-consuming to prosecute these people than it is to battle a killer virus, our law has too much law-itis.

We were deprived of the man we selected to be president for much of 3 years due to these shenanigans. We tolerated the Kenyan and didn’t impeach his ineffectual ass.

Barr, justice delayed is justice denied. Get it done.

Travesty? What a weak word. It’s nothing but a throw your hands in the air word. The word you are looking for, Mr. Barr, is Treason.

We went from total media outrage at a tweet ‘looks like ombama had my wires tapped” all the way to to the recent release of documents showing the fbi knew the steele dossier was garbage but used it anyway. Remember when the left flipped out over the very mention of fbi spying? Now it is an accepted fact. This has been in incremental process for a reason. Think of it as flattening the curve for the sky screamers and rachel maddows of the world. Too much of this too quickly and it would have led to widespread societal chaos. There is a lot here and it is all connected… clinton foundation, Uranium One, Ukraine, dnc… and yes, some “Republicans” were involved too.

You and insight and patience too I dare say.

Just a smoke screen to make us all think he’s doing more than collecting a pay check. Get back to me when they start building a gallows.

It doesn’t matter what Barr says, only indictments will suffice.

In conclusion: AG Barr has failed us.

Being he is not a stupid man, it’s intentional.