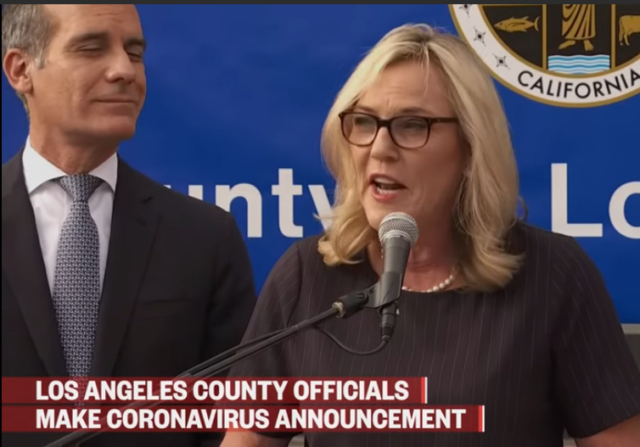 Los Angeles County officials have officially declared a local public health emergency regarding the coronavirus as six new cases of the disease were revealed in the county in the last 48 hours.

Barbara Ferrer, director of Los Angeles County Department of Public Health, said at a press conference with other county officials that leaders should expect more cases of #covid19 in the days ahead.

“If you’re sick with anything, we need people to stay home,” she said.

County officials stressed that they were acting out of “an abundance of caution” and not panic.

..The six new cases were confirmed Tuesday night with positive lab results and were linked to an “assumed known exposure,” according to Ferrer. A vaccine against the virus is not yet available, Ferrer said.

“There’s either a travel history to an area with an outbreak, there’s exposure to known travelers coming from areas where there’s an outbreak, or the person is in close contact with a confirmed case,” she said.

“This means as of today, we still don’t have known cases of community transmission.”

Placer County Public Health officials announced that a patient who had tested positive for COVID-19 after returning from a cruise to Mexico last month died. The individual was an elderly adult with underlying health conditions and was the county’s second confirmed case of COVID-19, reported Tuesday night. Officials said that close contacts of the patient were being quarantined and monitored for the illness.

The person’s likely exposure occurred during travel on a Princess cruise ship that departed Feb. 10 from San Francisco and sailed to Mexico, returning Feb. 21, officials said.

The patient tested positive Tuesday and had been placed in isolation at Kaiser Permanente Roseville.

The person likely had minimal community exposure between returning from the cruise and arriving at the hospital by ambulance on Thursday, health officials said. Ten Kaiser Permanente healthcare workers and five emergency responders, who were exposed prior to the patient’s being put in isolation, are now in quarantine.

Research indicates that two types of coronavirus could be infecting people

Preliminary data on COVID-19 suggests that there are two separate types of the novel coronavirus. One strain is more aggressive than the other.

The preliminary study, conducted by researchers from Peking University’s School of Life Sciences and the Institute Pasteur of Shanghai under the Chinese Academy of Sciences, revealed that the infection has evolved into two major types, designated L and S.

The L type, which is more aggressive, was more prevalent during the early stages of the outbreak in Wuhan — the original epicenter of the virus — and accounted for about 70 percent of analyzed strains. About 30 percent of those strains were linked to the S type, considered less aggressive.

The prevalence of the L type decreased after early January, researchers found.

The S type, which is considered an older, “ancestral version” of the coronavirus, has become more common since then.

I suspect many more will be self-quarantining in the days to come.

A New York family of five who are friends with the Manhattan attorney who infected his wife, two children and a neighbor have now also tested positive to coronavirus – as 1,000 others that may have also come into contact with him are ordered to self-quarantine.

It comes as the US death toll from the COVID-19 coronavirus rose to 11 on Wednesday as the number of confirmed cases across the country soared to more than 150.

…The New York cases increased to 11 on Wednesday after officials revealed that the 50-year-old infected Manhattan attorney had been linked to at least nine of the confirmed cases. A female healthcare worker who has not been linked to the attorney had earlier tested positive after returning from a trip to Iran.

The attorney’s wife, 20-year-old son, 14-year-old daughter and neighbor have all tested positive for coronavirus. His friend, the friend’s wife and their three children have also all since tested positive.

The photo makes it look like they are thrilled to make this announcement.

They hope to make the Corona Virus Trump’s Katerina….

THAT’s why this is a Public Health Emergency.

notamemberofanyorganizedpolicital in reply to walls. | March 5, 2020 at 1:31 pm

Biggest Tell that is is a Democrat Party HOAX!

“More people have Died in America trying to testify against ….Hillary then from the CORONAVIRUS.

I agree, which is why I continue call it China’s Coronavirus 2019.

Of course California officials are delighted. Along with the public health emergency announcement his means they can tap into that $8.5 billion (or whatever it was) that the US federal government has allotted to the Covid-19 outbreak. Don’t doubt it. They’ll be asking for federal money assistance to deal with this outbreak despite their intense hatred of the Trump administration. (California officials are hypocrites that way you know.)

notamemberofanyorganizedpolicital in reply to Lucifer Morningstar. | March 5, 2020 at 1:32 pm

Someone should tell that dullard that he doesn’t get the
entire $8.5 Billion.

What is in Democrats’ coronavirus containment plan – besides open borders?..

Hopefully machine gun nests along the border. It is virtually certain that China’s Coronavirus 19 will sweep uncontrolled through Latin America and that illegals will become a major part of spreading it. They will also represent a staggering cost which Americans should not bear.

Make all public transportation free? They keep floating that idea around Portland as they are building another light rail from nowhere to nowhere at $100M/mile.

I read at least one Mexican newspaper (in Spanish) every weekday morning. Two ominous data from this morning’s papers:
(1) Mexican President López Obrador is poo-pooing the epidemic, and
(2) Illegal immigration into the Mexican state of Chiapas has become completely uncontrollable because low water levels in the Suchiate River (which forms part of the border with neighbouring Guatemala) have made many more fords practicable.

Responsible people near that border are as alarmed as any LI readers.

I wish you were right, but that homeless problem will become a major medical cost problem.

I wish you were right, but that homeless problem will become a major medical cost problem.

Fuck California. Their problems are there own and not anybody else’s problem.

The Obama-era rule in question previously required state-run laboratories to only run medical tests pre-approved by the F.D.A.

Maybe the Typhus epidemic will slow down too?

More on the Obama Era Testing Rule that shot the US in the foot on CoronaVirus.

These articles are important. Please read them!

Corona Virus with a handful of deaths is a public health emergency. Urine and fecal matter on sidewalks are normal!?!

Freudian typo. I think I will keep it as is.

notamemberofanyorganizedpolicital in reply to Leslie Eastman. | March 5, 2020 at 1:37 pm

It’s only a matter of time until CoronaVirus gets into the homeless community, since it’s spread via Feces and Urine.

When there is a Poop Map of SF, you know there is a huge potential issue.

“”It’s only a matter of time until CoronaVirus gets into the homeless community,””

I think the left is depending on it.

Where did you find “those” facts?

Liz in reply to notamemberofanyorganizedpolicital. | March 5, 2020 at 2:25 pm

Here is one source for the fecal spreading of the virus.

notamemberofanyorganizedpolicital in reply to Liz. | March 5, 2020 at 5:55 pm

Liz in reply to notamemberofanyorganizedpolicital. | March 5, 2020 at 6:56 pm

There were other “news” reports about this issue, so it took a bit to find one that appeared scientific in nature. The researchers are from China but, they do have the most experience and samples to test at this point in time.

Though S.Korea and Italy are catching up with data points. I wouldn’t trust any data coming from Iran.

Large California cities are a petri dish of communicable diseases. Where this will lead is anybody’s guess, but when I see reports like this, I think “There but for the grace of God go I.” Maybe living in a much maligned and ridiculed Southern state isn’t so bad after all.
.

I think this sends a message that it’s important for the US to secure our borders – for this and many other reasons. We can limit air travel to infected locations, but unless we have more control over who is entering the country, it really doesn’t matter what other actions we take to limit the spread of disease.

“The way that this virus tends to make people sick is really by giving people pneumonia. So, a lower respiratory illness as opposed to most colds that cause upper respiratory infections,” said Phillips. “The problem with pneumonia is pneumonia itself can be deadly. Everyone should take a deep breath.”

So, if I have trouble with taking a deep breath, does that mean I should not be calm about it??? Otherwise, it’s ok?

Where do they get these people?

“Where do they get these people?”

We have one on LI, constantly glossing over the facts, sometimes outright misrepresenting facts about China’s coronavirus.

I don’t think anyone should tuck their head between their legs and kiss their tail goodby over this, at least not yet.

But I do think that we should treat risk it represents with a very healthy respect.

A month ago I started stockpiling supplies, topping off the inventory of stuff I use all the time anyway. So it did not cost me anything extra. When I went shopping today many of those things had purchase limits.

Bottom line, is that the market is reacting, and some people are not able to get what they want, but I am not one of them.

I expect economic disruptions to last at least six months.

Did you ever see anyone so happy as the two in that photo above?

The mayor of LA is a corrupt sleazeball who hides out until there’s some kind of issue he can insert himself in to make himself look good.

He’s a thief (investigated by the FBI, and dropped out of the presidential race soon after), incompetent, and likely the worst mayor city ever had – no hyperbole.

He’s destroyed the city of Los Angeles by importing literally an army of addicts, bums and lunatics.