“some students claimed to be celebrating in-person classes being canceled” 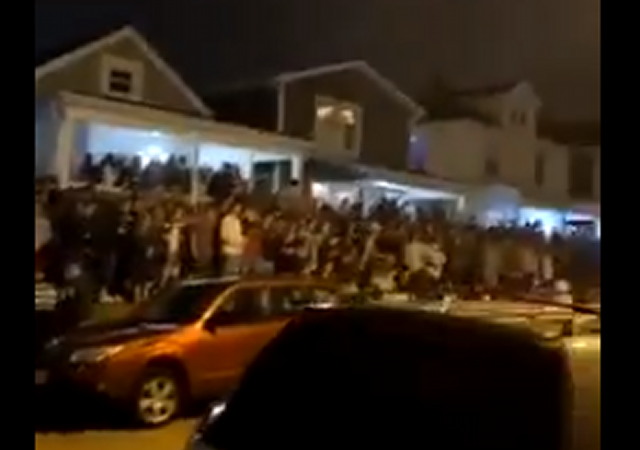 Things got a little tense here because of the size of the crowd.

Students at the University of Dayton in Ohio took to the streets Tuesday resulting in a tense clash with police after the school announced plans to cancel in-person classes due to the coronavirus outbreak.

Flyer News, UD’s student newspaper reported that hours after the school announced the in-person class cancellations and instructed students to leave university housing over concerns stemming from the coronavirus, as many as 1,0000 students blocked streets near the campus, jumped on cars, and threw objects, prompting a police response. Responding officers reportedly used pepper balls to disperse the crowd after verbal orders to the students to leave were unsuccessful. Flyer News posted video of the chaotic scene.

It’s unclear as to why students gathered in the streets, although WDTN-TV in Dayton reported some students claimed to be celebrating in-person classes being canceled.

UD students gathered in large crowds on Lowes Street in the South Student Neighborhood Tuesday night in reaction to the news that university housing would close Wednesday for most students due to the spread of the coronavirus. pic.twitter.com/82XL9uCR04

We have video of police officers shooting what appears to be non-lethal weapons at students. pic.twitter.com/kgSasTUtC6

We’ve got a photo showing that students had blocked Lowes Street pic.twitter.com/SfcNtvWnF2

Truly, we live in “interesting” times.

“We’re going to kick you out of your (admittedly temporary) homes because people your age are at low risk from this mostly mild disease.”

And they respond by standing in the street – together, where whatever risk they have will be maximized.

You would have thought that after the government forced them to buy expensive health insurance plans that they statistically did not need that they would have wised up a bit.

I am so glad that I grew out of being a smart college student.

Any excuse for a party. I wonder how rigorous this online education thing is gonna be.

Nevertheless I support decisions to close and am glad it will force the use of online education tools. It speeds the day when we can start doing college more affordably.