VIDEO: Joe Biden Claims He Became a Professor After Leaving the Senate

VIDEO: Joe Biden Claims He Became a Professor After Leaving the Senate

“When I left the United States Senate, I became a professor at the University of Pennsylvania” 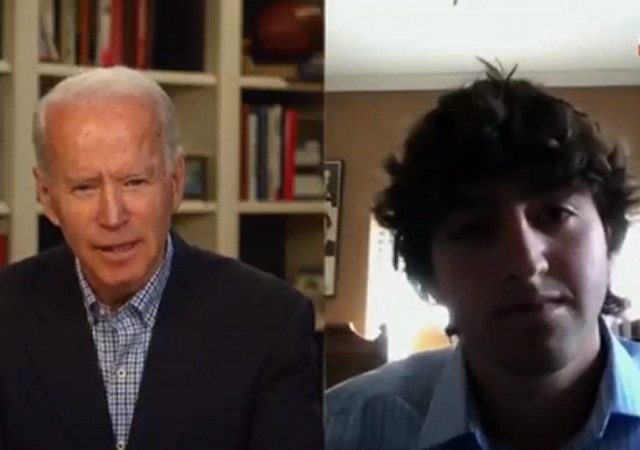 Biden was given a professor ‘title’ by the University of Pennsylvania after serving as Vice President, but it’s not like he ever taught a class.

Former Vice President Joe Biden appeared to make some factual errors during a virtual roundtable on Wednesday regarding his claim that he “became a professor” after leaving the Senate.

During an online campaign event, Biden took questions from young people and, while discussing the student debt crisis, Biden spoke about all the time he had spent on “campus.”

Biden, quite notably, became vice president of the United States under President Obama when he left the Senate in 2009. It was, however, in 2017 when he received the title of “Benjamin Franklin Presidential Practice Professor” from the University of Pennsylvania.

So Biden just said “when I left the United States Senate, I became a professor at the University of Pennsylvania.”

Unconscionable for the Lefty powers that be to let Biden disintegrate in public. Where is “Doctor” Jill Biden on this?

Sounds accurate enough. He didn’t say how he became a professor. An unmerited gift from On High still counts. Nor did he say what he did as a professor, aside from spending time on campus . . . and nobody has to be a professor to do that.

It’s a mystery where this “never taught a class” stuff comes from. He didn’t say he was a teacher. Quite a few professors try to get stuck with as few classes as possible; it sounds like he was just more successful than most.

I’d prefer to see criticism limited to actual flubs and lies. It’s not like there’s any danger of running out of those.

Joe walked around on campus a lot. He was a traveling professor.

“Benjamin Franklin Presidential Practice Professor”
So he was just practising to look like an actual professor? Just like actors who learn and practice some medical procedures so it looks good on film/TV?

He showed up on campus four times and gave speeches. For that Penn paid him about $770,000.

I taught as an adjunct for eleven years at the local community college. We were not allowed to put “professor” on our syllabi (although some students did address me thusly – out of respect, I assume). I had no problem with that, since I never held a Ph.D. and would have thought the title overkill.

“Instructor” might have been okay; at least no one ever made a stink about it. Believe me, a lot of these teacher-types DO get hung up on these things, because it’s virtually their only change to be a big fish in a mighty small pond.

Biden’s unearned title of “professor” reminds me of unearned doctorates and the like: at best it’s the academic equivalent of a participation trophy, and no one really lends it any credence.