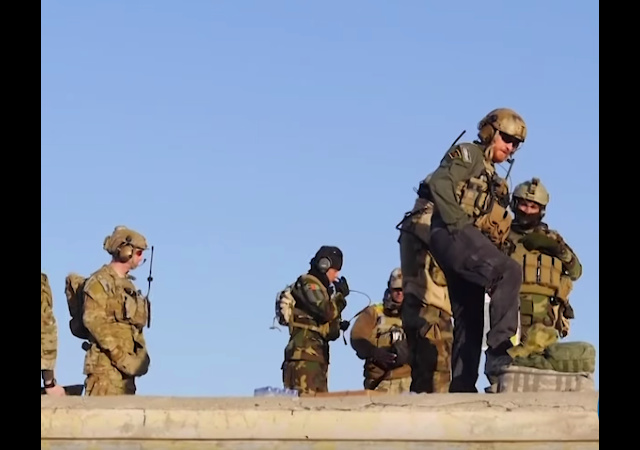 A U.S. official told The Associated Press that troops have started to leave Afghanistan.

The U.S.-Taliban peace agreement required troop withdrawal from the country 10 days after Secretary of State Mike Pompeo and Secretary of Defense Mark Esper signed the deal on February 29:

Hundreds of troops are heading out of the country as previously planned, but they will not be replaced as the U.S. moves ahead with plans to cut the number of forces in the country from about 13,000 to 8,600, the official said.

The official spoke to The Associated Press on the condition of anonymity to discuss the movement ahead of a public announcement.

The pullout comes as Afghanistan’s rival leaders were each sworn in as president in separate ceremonies on Monday, creating a complication for the United States as it figures out how to move forward on the deal and end the 18-year war.

The sharpening dispute between President Ashraf Ghani, who was declared the winner of last September’s election, and his rival Abdullah Abdullah, who charged fraud in the vote along with the elections complaints commission, threatens to wreck the next key steps and even risks devolving into new violence.

The U.S. has not tied the withdrawal to political stability in Afghanistan or any specific outcome from the all-Afghan peace talks. Instead, it depends on the Taliban meeting its commitment to prevent “any group or individual, including al-Qaida, from using the soil of Afghanistan to threaten the security of the United States and its allies.”

Gen. Scott Miller, the U.S. commander in Kabul, will “assess conditions once the troop level goes down to 8,600.”

The removal of troops should be completed within 14 months.

Good. We should have gotten out of that shithold 10 years ago if they weren’t willing to actually change things.

Trying to do something the Russians could not do was a little dumb. I’m sure the Russian ROE was nothing like what our military was saddled with.

Final proof that good intentions and an almost unlimited amount of money cannot civilize someone who refuses to leave the 7th Century.

This withdrawal is just further proof Trump is a war-monger.

/sarc tag for those who are irony impaired.

Let’s see … Make America Great Again or something like that.?

Afghanistan is winnable: the Mongols did it by piling up the skulls of the people of the cities who resisted, and made sure a good portion of the survivors’ descendants looked Mongol (the Hazaras, Mogholi, and Aimaq). But something tells me that not even Bolton would want our troops to act like that.

I think there is a difference between winning and exterminating.

How do I put this politely? The AfPak isn’t worth a fight. The only thing you can transport out of Afghanistan that’s worth your while is heroin.

We all know and Trump knows that this “Treaty” is an absolute joke. But we all know it is our open door to exit from this shithole of a country. I am sorry for the millions of poor souls that are trapped there but that is the price of islam. Women are below dogs and life is cheaper than dirt. No amount of help or money will change these people. Women around the world have learned to control their men but not in islam. Any revolution has to start with women. Even good muslim men have no respect for women and will never treat them with dignity and respect. We must leave and never look back at a noble effort to help them into the 21st century. We failed but no further sacrifice should be made with either blood or treasure.

Nixon’s Peace With Honor was a good excuse to get us out of Vietnam. And now, Afghanistan is not our problem.

Thank you President Trump for keeping another promise.

The US should have been out of Afghanistan in 2005, when we knew that Osama Bin Laden was no longer in-country. Unlike Iraq, the logistics of supplying troops in Afghanistan is a nightmare. And, the tribal society of the ‘Stan makes it all but impossible for any democratic centralized government to exist there. Also, unlike the War in Vietnam, where we squandered the opportunity to end the war following the Tet Offensive, there is no way to eliminate the Taliban unless we invade Pakistan and attack the Taliban strongholds there.

The fact that we are still in Afghanistan, where we are simply squandering resources, and no longer have a presence in Iraq, where we could have stopped the expansion of ISIS, says a lot about the foreign relations acumen of liberal Democrats.

I don’t know how to put this politely. Except, you have to laugh at life.

Today in a few hours I go under the knife. If the surgeon knows what he is doing this is hello. If he doesn’t this is goodbye.

Off the fantail of an aircraft carrier I am good to 300 yards.

Beyond that I need a platform that is sitting still.

Since when do I ask anyone to trust me.