The militia attack on Wednesday killed two Americans (a soldier and contractor) and a British national. 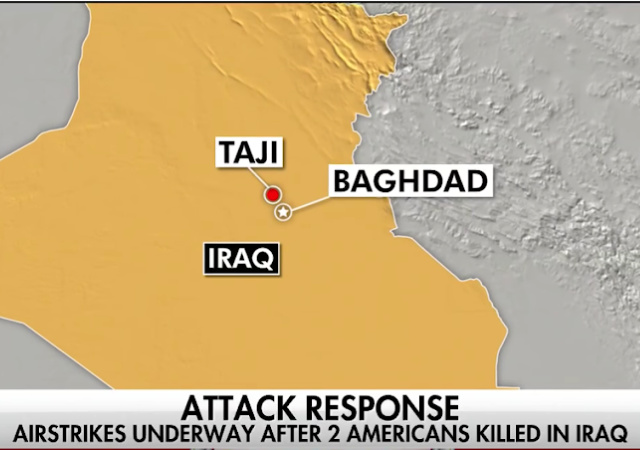 The attack on Wednesday killed two Americans (a soldier and contractor) and a British national after “more than 15 small rockets hit Iraq’s Camp Taji base.”

Iran-backed militants like Kataib Hezbollah and one other Shia militia group frequently target the U.S. troops in Iraq.

The Pentagon only spoke about the missile attack:

The Pentagon statement said the facilities hit in the precision strikes were used to store weapons used to target the U.S. and coalition forces. It called the counterattack “defensive, proportional and in direct response to the threat” posed by the Iranian-backed Shiite militia groups.

U.S. officials said the locations of the strikes were largely around the Baghdad region. One U.S. official said there were two strikes at Jurf al-Sakher, one in Karbala, one at Al-Musayib, and one at Arab Nawar Ahmad. The official said the U.S. expected casualties would be lower than 50, and said the main effort was to hit the weapons.

The officials spoke on the condition of anonymity because some details about the operations had not yet been made public.

Reports from mainstream media outlets did not report any news from the Pentagon on the death of Mashhadani.

I found an article from The Jerusalem Post on Mashhadani:

US airstrikes carried out in Iraq just after midnight on Friday may have killed an Iranian Islamic Revolutionary Guard Corps general supposedly named Siamand Mashhadani. Reports online in Arabic and in other local media have claimed he was killed in the attacks on five locations of pro-Iranian Kataib Hezbollah warehouses that the US carried out in retaliation to a rocket attack that killed three Coalition personnel on March 11.

According to Al-Ain media the Iranian officer was killed in the US airstrikes that took place. Reports of his death circulated around one in the morning in Iraq. He was an officer in the Quds Force of the IRGC, the same force once headed by Qasem Soleimani. Soleimani was killed by the US on January 3 in a drone strike in Baghdad. An Iraqi official told Al-Ain media that Mashhadani was killed near the town of Jufr al-Sakhar, one of the sites of the airstrikes. The town is north of Karbala in Babil Governorate. Supposedly four other members of the Quds Force were also killed. They were in a command and control headquarters for Kataib Hezbollah when the airstrike hit.

The article said that “‘Siamand Mashhadani’ may be a nickname, code name or kind of Arabic kunya war name because it is not a common name.”

Siamand Mashhadani is strange for an IRGC officer because those “consulted for this article” said Arabic and Farsi media has never mentioned his name:

Siamand is a Kurdish first name, the same as Iranian Kurdish Paralympic powerlifter Siamand Rahman. Mashhadani indicates someone from “Mashhad,” a city known for Shi’ite pilgrimages. A few people in Fallujah in Iraq have the name Mashhadani, but these are generally Arabic Shi’ite families.

The Jerusalem Post mentioned that other reports described Mashhadani’s roles:

According to reports, Mashhadani supervised the command and control of the Popular Mobilization Units (PMU) in Iraq. The PMU is a paramilitary group of militias that are part of the Iraqi Security Forces. Kataib Hezbollah has several brigades within the PMU. The US airstrikes targeted warehouses of those brigades. The US has struck the units before, in December after the same group fired rockets near Kirkuk that killed a US contractor. On March 11 the group fired more rockets at Camp Taji where US and Coalition forces are based. Mashhadani was influential in advising the PMU, as Soleimani once did. “He was one of the planners of attacks by the Hezbollah militias against the US military in Iraq,” an Iraqi force told Al-Ain.

Mashhadani has not been previously mentioned in Arabic or Farsi sources. According to current reports he played a role at a headquarters of the 46 and 47th brigades of the PMU. According to Al-Ain the US airstrikes hit a factory of manufacture of rockets used to target the US and also a center for manufacturing drones. These were located north of Karbala and other areas in southern Iraq.

“The Pentagon statement said the facilities hit in the precision strikes were used to store weapons used to target the U.S. and coalition forces.”

If we know where these terrorist weapons depots are, why are we waiting around until good guys get killed before taking them out?

If we know where these terrorist weapons depots are, why are we waiting around until good guys get killed before taking them out?”

Because every Mosque in Iraq has a stash of AK-47’s and explosives in the storeroom?

notamemberofanyorganizedpolicital in reply to Tom Servo. | March 13, 2020 at 2:31 pm

You said it Tom.

And that fact has been known for a few decades now.

Because this is a war, not a social justice action. Although, if they persist, there may be progress.

Speaking of the Jerusalem Post, does anyone have an update on Netanyahu? Last I heard, he was coming up short in trying to put together a coalition govt.

I saw a Jerusalem Post story yesterday rhapsodizing on how wonderful it would be if they allowed the Arab Joint List to become part of the Government and abolished every law that favored Judaism. Seriously, they published that. That’s what the left in Israel is now wishing for.

Hitting them where it hurts.

I guess anything positive about Trump and his agenda would be traitorous to the msm to make public. The days of the msm having even a tiny sliver of neutrality are long gone and it is now a requirement to not believe anything they say/print. I never dreamed that I would live to see such a day. Literally the msm is now part of the DNC. We can expect it to get much worse as the election approaches. Although, I don’t see how it could get much worse since they makeup stories and lies daily.

notamemberofanyorganizedpolicital in reply to inspectorudy. | March 13, 2020 at 2:33 pm

How many people have realized that their
barber, hair stylist, and even manicurists
have to have more “certification” and state licensing than “journalists” and “reporters”……