Secretary of State Mike Pompeo: Sanctioned companies “provide revenue to the regime that it may use to fund terror.” 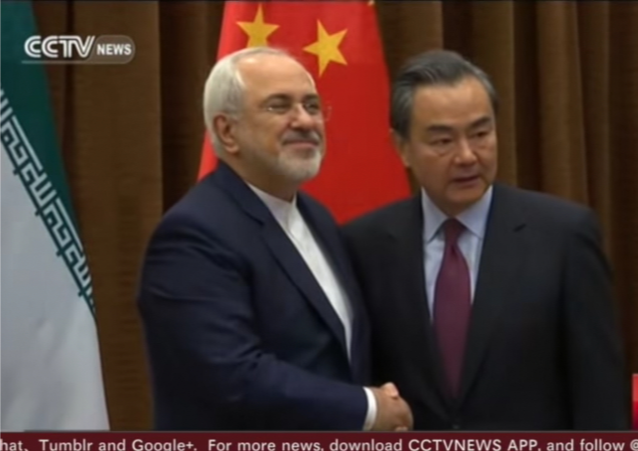 These companies were “engaging in a significant transaction for the purchase, acquisition, sale, transport, or marketing of petrochemical products from Iran,” the State Department said.

By continuing to violate U.S. sanctions on Iran, these China-linked companies were financing terrorism against the U.S. and its allies in the region, Secretary of State Mike Pompeo said.

“The actions of these individuals and entities provide revenue to the regime that it may use to fund terror and other destabilizing activities,” the Secretary of State said in a statement. The sanctions “will deprive the regime of critical income from its petrochemical industry and further Iran’s economic and diplomatic isolation,” he added.

The Czech Republic-based Radio Free Europe reported the latest round of sanctions:

The United States has imposed sanctions on nine companies and three individuals for allegedly doing business with Iran’s petrochemical industry.

Three Chinese and three Hong-Kong-based companies, two interrelated South African firms, and the Iranian Armed Forces Social Security Investment Company are suspected of “knowingly engaging in a significant transaction for the purchase, acquisition, sale, transport, or marketing of petrochemical products from Iran,” according to a State Department statement issued on March 18.

Three executives of one of the entities — Mohammad Hassan Toulai, Hossein Tavakkoli, and Reza Ebadzadeh Semnani — were also sanctioned.

The State Department says the entities and individuals “engaged in activity that could enable regime’s violent behavior.”

“The actions of these individuals and entities provide revenue to the regime that it may use to fund terror and other destabilizing activities, such as the recent rocket attacks on Iraqi and Coalition forces located at Camp Taji in Iraq,” Secretary of State Mike Pompeo said in a statement.

“Our sanctions will deprive the regime of critical income from its petrochemical industry and further Iran’s economic and diplomatic isolation. The United States will continue to fully enforce our sanctions,” he added.

The latest sanctions once again highlight China’s intense involvement in the Iranian oil sector, the regime’s primary source of revenue. While the U.S. sanctions have discouraged most countries from buying Iranian oil and gas, Beijing has emerged as one of Tehran’s most significant consumers. Chinese companies, many of them state-owned, have been heavily involved in drilling, shipping, and refining Iranian oil. In September, the U.S. penalized several Chinese oil and shipping firms for breaching the sanctions.

The regime is paying a heavy price for its economic dependency on China, registering the second-largest coronavirus outbreak after China. Iran recorded more than 32,000 cases of the disease, and over 1,300 Iranians have so far died as a result.

The Chinese virus has also disrupted Iran’s terrorist infrastructure, with leading operatives of the Islamic Revolutionary Guard Corps (IRGC), the regime’s military arm, and the pro-Iranian Lebanese terror militia Hezbollah contracting the virus. Aides close to Supreme Leader Ayatollah Khamenei have also tested positive for the virus, including Ali Akbar Velayati, his crucial adviser wanted for masterminding the 1994 car bombing of the Jewish center in Buenos Aires (Argentina) that took the lives of 85 people.

The outbreak has crippled the regime’s ability to carry out acts of terror in the region, according to the officials of the Israel Defense Forces. The disruption, however, hasn’t dampened Tehran’s desire to spill more blood on foreign soil. Just last week, rockets fired by Iran-backed terror militias killed two Americans and one British national at a U.S. army base north of Baghdad.

China is treading on my last damn nerve.

If we are honest, although the normal Chinese citizens are great, their governments for the last several thousand years have been the pit of pits for those normal people.

In short, their governments including this current Communist one are all Malignant Narcissistic.

They lie when they say their civilization is the center of the universe, and that their ways (culture) are superior to all others.

Note the below is what all communist and dictatorship governments are completely lacking.

But the fruit of the Spirit is love, joy, peace, forbearance, kindness, goodness, faithfulness, gentleness and self-control. Against such things there is no law.
Galatians 5:22-23 NIV

For this, the Iranians have received a large dose of Chinese coronavirus.
Very bad for the oppressed people there, no sympathy for the higher ups.
There is a reason they are the top middle eastern country suffering this disease.

Cheap goods from China are not worth the cost.

notamemberofanyorganizedpolicital in reply to SpaceInvader. | March 19, 2020 at 2:09 pm

Side note to yours about crappy product:

No one has mention how the shipping of the majority of manufacturing overseas – where the smallest fraction of a penny’s increase in profit is the Globalists’ god – has destroyed variety of goods.

Just compare what variety (with hundreds of local manufacturers) the U.S. used to have in just about every product category.

Shelving is my personal pet peeve in this matter. Look at those cheapest to produce big square boxes with the big X designed in the middle of them. They waste more storage than they provide. I could go on but I won’t just now.

It was never about ‘cheap goods’. It was ALWAYS about lining the pockets of treasonous democrat and GOPe politicans.

And it all began with bill clinton, naturally:

notamemberofanyorganizedpolicital in reply to TheFineReport.com. | March 19, 2020 at 4:23 pm

“Never let a crisis go to waste”… in this case the health, welfare, and future of the Iranian people dictates taking this action. The world continues the turn and Trump knows it.

notamemberofanyorganizedpolicital in reply to alaskabob. | March 19, 2020 at 2:10 pm

Dictators don’t care – to them people and their lives are cheaper than dirt.

China is proving to be, and has been, a real skunk at the picnic.

It was the Democrats via Clinton and RINO Gingrich which allowed MFN status to China and allowed China entry to WTO.

Their people are prisoners, watched wherever they go, social scoring controls who can buy, sell, travel.

And that skunk rolled real good in dog poo before walking across the picnic food.