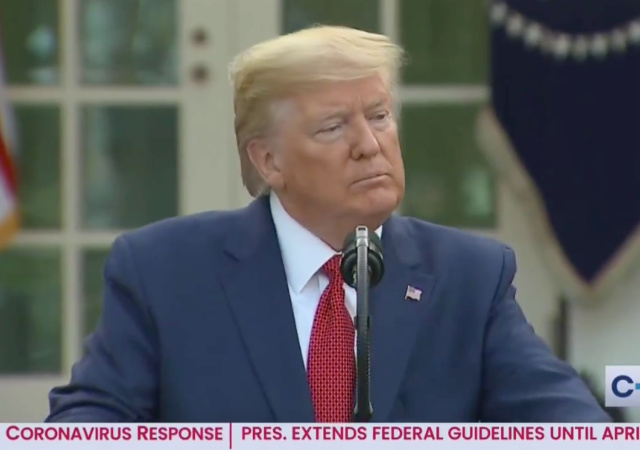 On Sunday, a CNN reporter tried to bring up remarks by President Donald Trump on Friday, which the MSM twisted to fit its agenda.

Instead of succeeding, Trump once again proved their deception on national TV for all to hear.

President Trump calls out CNN for taking his comments about being appreciative out of context.

“That is why CNN is not trusted anymore. They are Fake News.” pic.twitter.com/H1ioK5FVb7

This is what Trump said on Friday:

Some people in the MSM cut off the remarks after “job,” which made Trump appear snobby and conceited.

“I would also like to ask you about some comments you made on Friday,” CNN reporter Jeremy Diamond said. “You were talking about governors of different states and you said I want them to be appreciative. You also said if they don’t treat you right, I don’t call.”

“I didn’t say that,” Trump fired back. “Excuse me, ready? Take a look at what I said. I want them to be appreciative of me, okay, and then you cut it off because it is fake news [reporter interrupts] please, let me just finish. … Your statement and your response in your answer is a lie because here’s the story, are you ready? I said I want you to be appreciative of me, and then you go on — and then I go on, you cut it off.”

Diamond then brought up additional remarks that Trump made during that same press conference from last week when Trump appeared to say in a semi-joking manner that he did not call two Democrat governors because of how the treat the administration but that Vice President Mike Pence calls them and works with them.

“You are not appreciating these incredible people, from private enterprise that are delivering things in numbers that nobody’s ever seen,” Trump told the reporter. “That’s why people aren’t watching CNN very much anymore. That’s why they don’t like it. That’s why your ratings are no good because you even after knowing the truth for days now, you bring up the old lie. Read the rest of your question, the rest of your statement, you didn’t put in. You have to put that in. And it said in there FEMA. It said in there Army Corps of Engineers because when they disrespect me, they’re disrespecting our government. And you know what? I don’t mind if I’m disrespected, but they can’t disrespect the Army Corps of Engineers and FEMA.”

Trump then called on a different reporter but the CNN reporter continued to shout and interrupt.

“I want them to appreciate the incredible job we’re doing,” Trump responded. “We are doing a job the likes of which has never been done before. And there are a couple of people that know that, but for political reasons, let’s say they are Democrats, they don’t want to give this administration credit, then’s okay — and that’s okay, but I don’t have to deal with them. But our vice president does deal with them.

“We are not fake news!” the reporter responded.

The MSM are ghouls — they’re willing to put spokes in the wheel (of Trump’s efforts to save thousands of lives and millions of livelihoods) just to make China look good and improve the Dems’ chances of putting a zombie (Biden) in the White House.

notamemberofanyorganizedpolicital in reply to moonmoth. | March 30, 2020 at 3:32 pm

CNN is not now, nor has it ever been “news” reporting org.

Create by the CIA, for the CIA.

CNN only knows gotcha-journalism. They aren’t the least bit interested in that Kung Flu.

If you can make it in New York City… Trump knows social liberal club, and he responds proactively.

There was a similar story about a priest, no longer viable (presumably because of the Wuhan-sourced virus), who said that we can control infection, respond to disease, and mitigate collateral damage, but was misrepresented as ignorant, callous, even deplorable, in a press, media, and social platform-driven confirmation bias that can be characterized as gay satisfaction.

this is why trump won. he may be an egotistical asshole but he does not back down. rather he takes the fight back to them. and they cannot grasp that.

It’s more than that. He remembers what he said, and can clearly point out the problem with the reporting. He doesn’t just fight back: he is effective.

notamemberofanyorganizedpolicital in reply to Valerie. | March 30, 2020 at 3:34 pm

Easy peasy to remember what you say,
when you’re not reading the script of terrorists
from the “Tele-Prompter.”

Just as Lincoln said about Grant, after complaints arose about his style, and his drinking: “I cannot spare the man; he fights!”

I think the main reason why people like Trump is because they think he is RIGHT to fight back against a dishonest media.

CNN is proving how superfluous they are and perhaps viewers are noticing. MSNBC and FNC do a better job with news and give you the commentary you expect – left or right. CNN is a sham, proving it by not showing pressers when others are. Making it inferior even to MSNBC for lefty spin. It has become a parody of a news network. It’s so bad right now that on many days FNC’s demo numbers eclipse CNN’s total numbers. Pitiful.

notamemberofanyorganizedpolicital in reply to casualobserver. | March 30, 2020 at 3:36 pm

Why would the Deep State’s own network not want to
air President Trumps pressers?

The MSM is so bad that anything they say I have to assume the opposite is the truth.

POS hack downright lied, and doubled down on lying.
‘Direct quote’ he called it, as he misquoted the President.

I am all for kicking them out of the press pool. They are true enemies of the people.

It’s the same thing they did, and still do, with the Charlottesville comment.
“He said the nazis are good people.”

The MSM LIES.
It is INTENTIONAL.

notamemberofanyorganizedpolicital in reply to Exiliado. | March 30, 2020 at 3:38 pm

And the LOCAL MEDIA LIES just as badly.

Another aspect of that lie that I have seen very few people remark upon: The President’s critics conflate the rally and subsequent riot, in which, as he correctly said, there were both good and bad people on both sides, with the neo-nazi march that took place the previous evening, at which there were no good people and about which the President has to the best of my knowledge never commented or been asked to comment.

For instance, the latest version of the lie I saw, just yesterday, was from someone who carefully didn’t accuse the President of calling nazis “very fine people”, but rather of using that term of those who marched with nazis. But he didn’t. The “very fine people” he mentioned (on both sides) didn’t march with nazis (or with communists), they merely attended the same event as them, and got caught up in the same riot. The march was a completely separate event in which the “very fine people” did not participate at all.

Problem with this yesterday is he gave the report to much time. He should have just had him read the full quote and moved on. By dragging it out, I think it hurt him and made him look like it was a personal issue.

I wish someone could convince him to stop using stupid superlatives–“no one has ever seen, best ever,” etc. It doesn’t provide any advantage and only makes him like an egoist. I guess we’ll see what happens.

Is he correct when he uses the superlatives? Please specify where he’s wrong, with evidence.

Do you understand the extent to which many Americans had lost pride in their country? Do you understand that Trump is rebuilding American self-confidence and pride? Can you point to a country that is better than the USA or accomplished what the USA has within so short a time? Please specify with evidence.

Stop bitching about how Trump does what he does. Rather, enjoy the results.

notamemberofanyorganizedpolicital in reply to Juba Doobai!. | March 30, 2020 at 3:40 pm

No, he is almost never correct when he uses those superlatives. They are what the law calls “puffery“. His supporters know to ignore it and focus on the substance of what he is saying. But his opponents pretend to take the hyperbole literally and attack it as if it were fraud.

Very well said and I believe, accurate as well. The left has gone “all in” on the notion that Americans are too stupid to distinguish style from substance. All the cards get turned over in November. My money’s on America.

These 27 year old know nothing twits in the press (Obama’s advisor Ben Rhodes correctly characterized them as such) don’t understand that if you try to play “gotcha” with Trump, he’ll get you in return.

I wonder if Trump can just outright ban CNN from press events. At the very least make CNN ghouls sit there quietly; warn them at the first bit of noise, out you go. Sit down, shut up and watch.
DJT is right nobody watches CNN anymore. I go to my favorite Chinese restaurant which always had big screens showing CNN. Last couple of times Fox News was on instead.

Yes, he can ban them. He can refuse to speak until they’re gone. The court order last year (was it last year) merely said that if the White House creates such a thing as a press pass, and gives them out to people as a right, it can’t then take one of them away without due process. But it doesn’t have to create them in the first place, and having created them it can cancel them all and replace them with new ones making explicit that they are invitations that are granted as a favor and can be withdrawn arbitrarily. And it can certainly at any time tell any person on its property to leave.

GOAT. (Sorry George, I think you were too nice)

You have to love a strong President who hands these lying creeps and monkeys their empty heads. He spits their garbage right back in their faces. CNN = Death. People who watch that crap LOVE being lied to, eat up the bs. Losers.