PUL-042 from Houston-based Pulmotect shows how American scientific ingenuity is being brought to bear in fighting the war against what Trump has called the “silent enemy.” 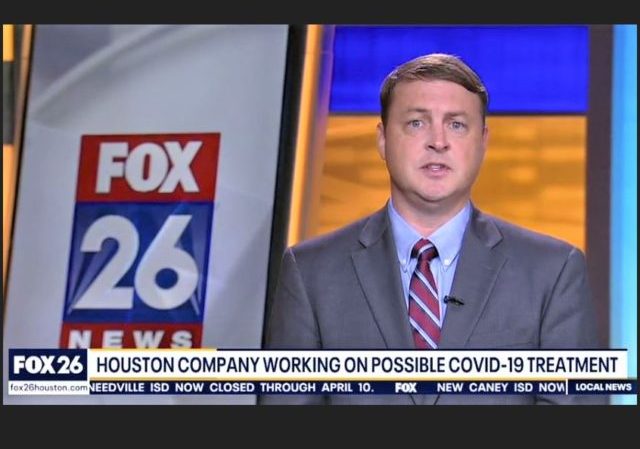 While numerous potential Wuhan coronavirus (COVID-19) treatments are in the news, a largely unheard of but potentially important treatment for COVID-19 known as PUL-042 has just been reported on by the Houston Chronicle.

It comes out of a biopharmaceutical company called Pulmotect (from Pulmonary Protection), which has done an abrupt pivot in recent weeks to test the drugs’ efficacy in treating COVID-19. According to the company in a video release (see below), their team is working “full-time, 18 hours a day, in order to take this drug into upcoming clinical trials.”

A Houston company is developing a drug that could protect people in close contact with patients who have COVID-19 from contracting the illness caused by the new coronavirus.

The drug, delivered as an aerosol known as PUL-042, was created by biopharmaceutical company Pulmotect, MD Anderson Cancer Center and Texas A&M, which have worked together to develop the drug for more than a decade. PUL-042 has been tested on mice and had limited human trials in the United Kingdom, and at that point would usually be at least a year away from approval by the Food and Drug Administration…

Pulmotect plans to launch clinical trials testing the safety and effectiveness of the drug in humans next week at Houston Methodist, the company said. If successful, it could request expedited approval in the next six months.

It differs from most vaccines because its effect is almost immediate, but temporary, while vaccines can take weeks to develop antibodies that can fight infections, but last for years, if not lifetimes.

Someone taking the PUL-042 would have to inhale it twice a week to maintain its effectiveness, said Dr. Burton Dickey, chair of pulmonary medicine at MD Anderson Cancer Center and one of the leading researchers.

PUL-042 is delivered in the form of an aerosol that is inhaled. It puts the lung’s native immune system on high alert.

It has been in development for the past ten years to treat cancer patients susceptible to respiratory infections, and has already been tested on human beings and found to be safe. More to the point, it has already been tested in preclinical trials with mice against two other coronaviruses, SARS and MERS, and found highly effective.  It has also worked against anthrax and flu.

According to Pulmotect, they have completed preclinical testing and also has completed two Phase 1 clinical trials. They filed two Phase 2 protocols against COVID-19 with the FDA Monday, and are awaiting approval to conduct the trials. Pulmotect is partnering with Houston Methodist Hospital and Research Institute for these trials.

Pulmotect also reports they have enough drug product now to do a 100-patient clinical trial, which they hope to begin next week. That trial takes two weeks to complete, after which a larger four-week trial would be conducted If trial results are good, large-scale manufacturing can be started quickly.

A video from the lab:

Will this amount to a treatment? Obviously that’s to be proven. But this development along with many other research developments show how American scientific ingenuity is being brought to bear in fighting the war against what Trump has called the “silent enemy.”

“You don’t need more than one, maybe two, different kinds of treatments for the Coronavirus.” (Bernie Sanders, Socialist)

I want 5, minimum, because people differ from one another.

This sounds like something that might be immediately useful for all medical personnel to avoid contracting the coronavirus. I don’t see this being used on the general population quite yet.

Hmmm. In that the most deadly symptoms are lung related, it seems a whiff of this along with one of the anti-viral malarial drugs might be just the ticket.

Just don’t mention it to Dr. Fauci. He will go all mealy mouthed about it.

It seems to me that if it tests positively then maybe there can be an executive order to allow sick people to use if they sign a waiver and take it under the new “Right to Try” law. That way they would be guinea pigs but also help themselves and their fellow Americans.