Over 1,300 Delegates in Play for 2020 Democratic Candidates 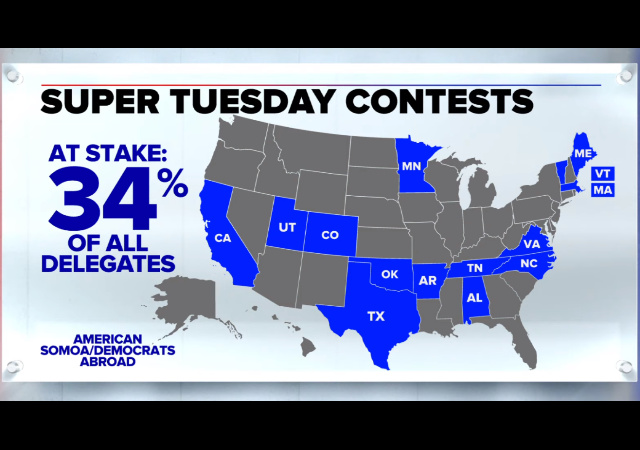 It’s Super Tuesday, which means fourteen states voted in primaries today. Over 1,300 delegates are up for grabs for the 2020 Democratic presidential candidates.

California has 415 delegates while Texas has 228 delegates.

As of Tuesday morning, Sanders had 60 delegates. Biden is in second place with 54 delegates. Warren had seven while Bloomberg and Gabbard have none.

Remember, “winning” a state is symbolically important, but what really matters is delegates, and whether the 2nd and 3rd place contenders pass the 15% threshold to get delegates. While “winners” will be declared early, delegate counts will not be known until much later.

BREAKING: Bernie Sanders is projected to win the California primary, according to the AP. #SuperTuesdayResults https://t.co/IctpSpzGYF pic.twitter.com/rOZpfRbN4G

The Fox News Decision Desk can now project that former Vice President Joe Biden will win the commonwealth of Massachusetts, beating Senator Bernie Sanders from the neighboring state of Vermont and, Senator Elizabeth Warren, who will come in third in her home state. pic.twitter.com/ui8j1yj8Or

BREAKING: Bernie Sanders is projected to win the Utah primary, according to the AP. #SuperTuesdayResults https://t.co/bs03Wtg3Mc pic.twitter.com/tl7bHhrchA

I wonder who Bernie voted for. Bloomberg, Biden?

I wonder if Biden remembered who the candidates are.

Once again I fumble fingered and hit the downvote button. Could someone please move it?

notamemberofanyorganizedpolicital in reply to Petrushka. | March 3, 2020 at 8:18 pm

Sure hope Biden remembered to vote for himself for Senator from North South Carolina!

McGehee in reply to notamemberofanyorganizedpolicital. | March 3, 2020 at 10:11 pm

He voted for the other Biden.

Which one, his sister/wife or his wife/sister?

The Friendly Grizzly in reply to notamemberofanyorganizedpolicital. | March 4, 2020 at 4:57 am

What was his final count in East Dakota?

Strange thing in Massachusetts . . . the R ballots had a big blue band at the top, the D ballots a red band. Whatever happened to that “Blue State/Red State” thing?

This un-enrolled voter did his part of Operation Chaos here in MA. Though I feared that it would burst into flames in my very conservative fingers, I took a D ballot and gave the nod to the Bern.

I want the November election to be one of real contrasts. Really put it to the voters, in the starkest of terms,

“In which direction do you [the voters] want the country to head?”

The way of the Founders/Framers (with Trump acting as an imperfect proxy),

or, the way of the EU/USSR/PRC/UN (with Bernie as a model proxy)

Do we want freedom FROM government (which is the question with which the Framers wrestled) via limited, constitutional government whereby government itself is bound by law, or do we want total government?

How the hell did we let the media label Republicans — true blue patriots — as “red” and Dems — pinko commies, reds — as “blue” in the first place? This has always bugged me. I ain’t no pinko Commie!

Back in the 1980s, wearing a red tie was viewed as a confident, power symbol and a lot of Reagan Republicans started wearing red ties.

notamemberofanyorganizedpolicital in reply to CaptTee. | March 4, 2020 at 3:43 pm

Red was Nancy Reagan’s favorite color too I think.

The TV networks used to alternate the red and blue designations; R-Red and D-Blue just happened to be the way they had it in 2000, and the reporting on that race created the public expectation that the same colors would continue to be used. It has never had any official status, and there’s no reason the MA electoral officials should honor it.

And yes, it’s weird that the GOP somehow got stuck with red, the color of socialist parties all over the world, while the Dems got stuck with Conservative Blue.

I’m most curious to see how Mini Mike fares. Am I alone in being surprised that Beto didn’t endorse Bloomberg? The two were BFFs in the gun battle. I wonder why the bad breakup?

notamemberofanyorganizedpolicital in reply to txvet2. | March 3, 2020 at 8:26 pm

Is that Beto on his skate board?

notamemberofanyorganizedpolicital in reply to EOS. | March 3, 2020 at 8:08 pm

Speaking of Dictator Wannabe Mini Mike, have you seen this video of him CHOWING down on Junk Food and spreading germs?

Mike Bloomberg Demonstrates
How To Spread Germs During the Coronavirus Outbreak

Mini Mike is an absolute SLOB.

Watch him AWKWARDLY rip a slice of pizza, place it back into the community pizza box, lick his fingers, then put his hands on the box of coffee!

As fun as all this is…I really want to see the overall turnout numbers R vs D. I really think this will be a slaughter, considering the R’s are showing up for either the down volte, or the D disruption….

Why is it okay for people to be inside precinct polling places videoing and photographing voters? If it’s okay then what stops news reporters from doing the same thing? It seems like it could be used to intimidate people.

Shoving a cam-phone into a persons face is a pretty aggressive act.

One could surreptitiously photograph voter role sheets used by precinct workers under the pretense that they’re just photographing a friend. That doesn’t seem kosher.

I exercised my franchise and voted for Biden. I feel sorry for the guy as I truly believe he has dementia or worse. He may not make it until Super Thursday, let alone November. A medical exam may be in order.

A vote for Biden is a vote for his puppeteer, whoever that is.

notamemberofanyorganizedpolicital in reply to txvet2. | March 3, 2020 at 8:06 pm

American Somoan is not on the list:
Bloomberg gets five whole delegates Gabberd gets one.

Here in EL Paso TX, at 0715 a small line with all machines occupied. About a dozen folks verifying on site to vote R, we have an open primary system. No technical issues.

This afternoon local radio reporting 34K early d votes this cycle vs 17K in 2016. This seems at first look to be a fired up d base. Maybe they the final totals won’t be up as much but lots of Bernie bros here in EL Paso.

One thing to remember. It’s not the wins or votes it’s the delegates.

And the Donkey process games the crap out of them….

This couldn’t be a better result for POTUS and liberty-loving Americans (i.e., conservatives). All-out internecine war between Corrupt Biden’s decidedly lukewarm supporters, and, Comrade Sanders’ rabid neo-communist brownshirts. Whoever emerges from this smackdown will be a deeply-flawed candidate pushing a demonstrably failed and discredited ideology, who has alienated half of the embittered Dhimmi-crat base, merely by denying the other Dhimmi-crat candidate the nomination.

Pass the popcorn and take a seat — this is going to be fun to watch.

I will be interested to see the final numbers for Trump, in terms of how many come out simply to say they voted for him twice in 2020!

I remember of the joys of voting against Hillary twice in 2016!

What you voted for Sanders in the 2020 primary?

Probably because Comrade Sanders would have been a far weaker candidate than crone Hillary, in 2016. So, a conservative voting for him in the primary in 2016, or, at present, is a strategic calculation designed to give POTUS the weakest possible Dhimmi-crat as an opponent.

Of course the drama was with the Ds, but our President had unbelievable numbers..I watched news coverage for two hours, and this is not getting much press.

Mrs. McG and I early-voted here in Georgia in a staunchly Republican county. The two presidential primary elections, R and D, are the only things on the ballot.

The place (one of two early-voting locations in the county, and in the even-more-Republican-if-that’s-possible eastern part) was surprisingly busy, considering there’s only one name on the R ballot here — and early-voting goes on for three weeks.

Looks like the Romney voters are going big for Bernie.

Looks like Joe has all the momentum, until he gives tonights acceptance speech, then crash.

And Bill Clinton sez, “Woot! I feel your…”

Biden got to speak and introduced his wife as his sister.

Yeah but how much of that money did Bloomberg spend in Illinois, New York and Florida. It’s conceivable that he could win those states.

Something I would like to see to get a brokered convention.

Given that now there are only five people in the race, is there any reason not to ask Tulsi to the next debate?

All of this horse race stuff is nice, but what counts is who won how many total delegates.

This is walking by the graveyard.
Biden’s speech was terrific for the most part. When he strayed from the teleprompter he did have moments of hesitation and stumbled. However this was hardly enough to detract from the exuberance of his day by his fans.
Ridiculing the enemy to one’s own troops might inspire troops, but it does not diminish the power of the enemy’s troops. Bernie will get a serious money injection and some real pros will show up to keep him out of the media except when orchestrated.
Just like Hillary.
There will be a battle ahead.

The thing to take away. THe one nonscripted moment, right after the protestors Biden was confused as hell for a couple of minutes.

I think the story in North Carolina is how close the race was in the 11th Congressional District. Mark Meadows is retiring and gave his blessing to Lynda Bennett to replace him. She had the highest number of votes, but it really doesn’t matter. Since none of the twelve (!) candidates garnered 30%, there’s going to be a runoff. From Ballotpedia: “With all precincts reporting, Bennett received 22.7% of the vote to Cawthorn’s 20.4%. Jim Davis received 19.3%. A candidate needed more than 30% of the vote to win the primary outright. The primary runoff is May 12.

The most striking aspect of the vote appears to that Biden’s strength is where blacks constitute a majority or close to a majority of Democratic voters. The few white majority states that he won appear to be because of its splitting between Bernie, Warren, and Blomberg.