Super Tuesday Pushes Biden to the Top With Most Delegates

Super Tuesday Pushes Biden to the Top With Most Delegates 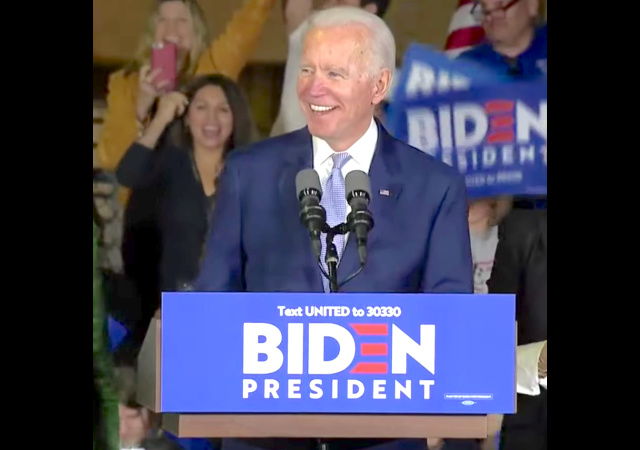 Over 1,300 delegates were in play on Super Tuesday for the 2020 Democratic presidential primary candidates after fourteen states, along with American Somoa, voted.

Sen. Bernie Sanders (I-VT) is projected to take California, the biggest prize, but it will not put a dent in Biden’s numbers. The total amount of delegates in California may not come out for a few days “because of the large number of mail-in ballots.” 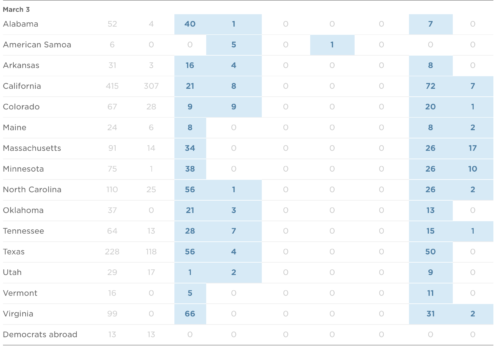 In Los Angeles on Tuesday night, Biden told the crowd, “I’m here to report: We are very much alive!”

The results show the race is between Biden and Sanders. Sen. Elizabeth Warren (D-MA), despite all the love from the media, came in third in her state!

I do not know if anyone is shocked by all of this considering Biden easily took home South Carolina. Then we saw former South Bend Mayor Pete Buttigieg and Sen. Amy Klobuchar (D-MN) drop out of the race. They threw their support behind Biden at a rally on Monday night in Dallas, TX, along with former candidate Robert O’Rourke.

The Wall Street Journal spoke to a woman influenced by those rallying around Biden:

The rallying behind Mr. Biden and clearing of competitors in the party’s moderate wing played into the decision-making of Jennifer Felix, a 51-year-old real-estate agent from Alexandria, Va.

At her polling place in the city’s Old Town section, Ms. Felix said she voted for Mr. Biden after seeing the party come together in recent days.

“I think Joe Biden has the experience,” she said, noting that she considered Ms. Warren and Mr. Sanders to be too divisive.

He’s got this Senate race in the bag. Thank “you know how it goes”.

Biden announced, “I am the only Democrat that can defeat Ronald Reagan.”

Bloomberg said that he bought 21 seats in Congress for the Democrat Party so that Nancy Pelosi would be Speaker of the House.

I think he got more for his money when he got American Samoa.

And there goes Bloomberg.

And there goes Bloomberg. Commercial breaks across America will return to normal.

Just in time — the “mute” button on my remote was wearing out.

I agree. If Biden should happen to win in November, then his VP will become America’s first “25th-Amendment” President. Perhaps (if allowed by law) even before 20 January 2021.

The guy’s an embarrassment. By November he’ll be drooling all over his shirt. I expect we won’t see many live appearances. Maybe he can get a cardboard cutout to do stand-in.

I thought about voting for Bernie, but I just couldn’t humiliate myself in public when the poll worker asked which primary.

In a normal family, the kids are holding an intervention with old Dad for his own good and the public safety … “Dad, please give us the keys to the car …”

Some of those same kids want to let grandpa Joe have the keys to America?

It’s really sad when a presidential candidate hast to inform his supporters that he is actually alive.

I see Joe is taking credit for the Stock Market gains today. It’s always about him. The public wants to know that the candidate knows what he’s talking about….