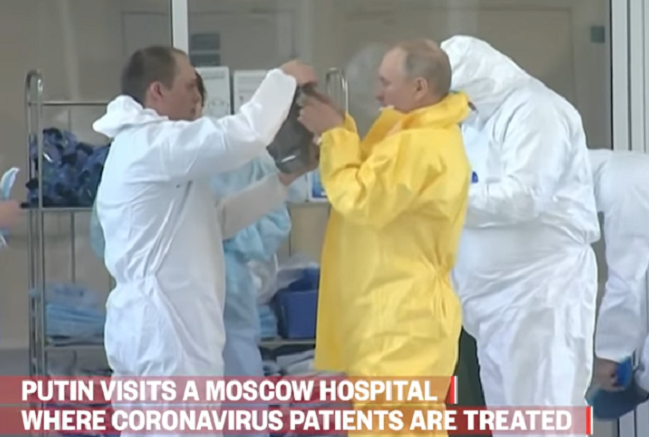 Russia’s Vladimir Putin recently finagled constitutional amendments to permit him to run for two more terms (though he said that it should be a temporary constitutional change that covers only him).

Now that he has effectively sewn up his position as president until 2036, Russia is finally starting to reveal more fully the extent of its coronavirus infections.  Russia is apparently still claiming that they’ve had no Wuhan coronavirus-related deaths.

Russian authorities are now admitting, however, that there may be more cases in the country than is currently known, including in Moscow, where it is said to be much worse than it looks.

The mayor of Moscow told President Vladimir Putin on Tuesday that the number of coronavirus cases in the Russian capital far exceeded the official figures, as Putin donned a protective suit and respirator to visit a hospital.

The comments by Sergei Sobyanin, a close ally of Putin, were authorities’ strongest indcation yet that they do not have a full grasp of how widely the virus has spread throughout Russia’s vast expanse.

Russia has so far reported 495 cases of the virus and one death, far fewer than major western European countries.

Putin has previously said the situation is under control, but some doctors have questioned how far official data reflect reality, and the government on Tuesday closed nightclubs, cinemas and children’s entertainment centres to slow the spread of the virus.

“A serious situation is unfolding,” Sobyanin told Putin at a meeting, saying the real number of cases was unclear but that they were increasing quickly.

Testing for the virus was scarce, he said, and many Muscovites returning from abroad were self-isolating at home or in holiday cottages in the countryside, and not being tested.

“In reality, there are significantly more sick people,” Sobyanin said.

One of the reasons for scarcity of information (apart from Russia being Russia) is reportedly the lack of testing.

Russian authorities acknowledged Tuesday that a low number of coronavirus cases in the country could be a result of insufficient screening and warned that the nation must brace for the worst.

President Vladimir Putin donned a yellow protective suit to visit the top Moscow hospital treating coronavirus patients and conferred with officials on how to stem the outbreak. Hospital chief Denis Protsenko told Putin the country needs to “prepare for the Italian scenario.”

Russia has reported 495 cases and no deaths. Critics have argued for weeks that the numbers are too low for a country with a 2,600-mile border with China, blaming a low level of testing and a long tradition of hiding unpleasant truths.

. . . . Some have accused the government of manipulating the statistics to downplay the coronavirus threat in order to prevent panic and ram the constitutional vote through at any cost.

“They themselves don’t know how many actual cases they have, because testing is of such low quality” said Anastasia Vasilyeva, a doctor for Russian opposition figure Alexei Navalny and leader of the Alliance of Doctors union.

Vasilyeva and some others pointed at a 37% increase in pneumonia cases in Moscow in January as a sign that the figure could include some unreported coronavirus cases.

“We receive information from medical workers in the regions. … Hospital beds are full with these, supposedly, pneumonia cases patients,” she said.

The authorities have denied tweaking or concealing coronavirus statistics and argued that the increase in pneumonia cases could have been explained by a more proactive screening for pneumonia this year.

Officials have ranted about “fake news” of covered-up deaths and said that those spreading them could face criminal charges. On Tuesday, Vasilyeva said the police were investigating her for claiming the government was manipulating statistics.

I had been wondering about Russia and this Chinese Virus. This is the first I’ve heard they have it within their borders, even though it seemed doubtful that they would be exempt from it, given it’s wide spread across the rest of the globe.

This event is going to change society and the world. Not sure if it will be for the better. I foresee that China trade falls, that they have been the center for a number of these pandemic like diseases seems a bit too coincidental to be totally natural.

I fear we will see Governments becoming more powerful through this, at the cost of our freedom. I see social distancing becoming more normalized, though it may help strengthen families, it will also mean more bubble type living. I see distrust in governments growing, distrust in the media getting worse, and I’m not sure where will lead us.

“I had been wondering about Russia and this Chinese Virus.” Well, there’s that famed Stalin-era Moscow subway. Only marvelous subways don’t seem so marvelous in a world of highly contagious diseases.

“I foresee that China trade falls, that they have been the center for a number of these pandemic like diseases seems a bit too coincidental to be totally natural.” There are (IHMO) plenty of natural reasons why flu pandemics tend to originate in Asia.

I’d be surprised if one of the things that falls out of this is a (possibly mandated) reduction in the dependance on sourcing pharmaceutical drugs, and the precursors used to make these drugs, from China.

In general businesses have accepted fragile supply lines as a necessary evil to obtain the lowest possible price. Which is often a “China price” that no one else can match. In decades past, businesses often went too far the other way by insisting on multiple sources for everything, and carried costly, excessive inventory “just in case.” But there might be a moderation toward the mean.

“I see social distancing becoming more normalized.” Businesses have been moving away from in-person meetings for a long time; I’d expect to see still more Skype and fewer Frequent Flyer miles. Although on the personal level I’d expect to see a huge rebound in bars, restaurants and other places of casual in-person socializing.

Unless waves of pandemics become the new normal, of course.

Beginning to wonder what the difference between putin and American politicians is. Doesn’t seem to be all that much difference, lying is their skill set.

An extra $25 million for House of Representatives salaries and expenses
—————————
Cheryl
@cmgannon56
·
9m
Replying to
@kerpen
Pelosi and Schiff owe a lot to The Lawfare Group for their impeachment legal assistance. And we taxpayers get to pay for it. Lucky us, huh?
————————
Manu Raju
@mkraju
· 14m
Right now on the Senate floor, it’s GOP senators who are criticizing the bill, railing on the more generous jobless benefits detailed in it. Democrats are defending it. Ben Sasse will have an amendment to change the provision – and the amendment will fail before final passage
—————————-
Phil Kerpen
@kerpen
·
1h
The $75 million each for the National Endowment for the Arts and the National Endowment for the Humanities are in the final bill.
——————–
Phil Kerpen
@kerpen
·
7h
Here’s a gem for the union bosses on page 524. If a medium size business (500 to 10,000 employees) takes the Treasury loan, they can’t oppose any union organizing effort.

There is freedom of speech, but there is also terror by the democrat media, the IRS (lois lerner), FBI (victims Roger Stone, General Flynn), CIA etc.

We have the Second Amendment, but that is under attack by the governing ‘looting’ class of democrats and GOPe scum.

We have free elections, but they are subject to rampant voter fraud on the left (witness that gangster pelosi’s trying to jam ‘mail in’ ballots in the virus rescue bill.

The Russians have a Ministry of Justice, which our own Dept of Justice run by holder/lynch/sessions (and perhaps barr) has now come to resemble: that dirtbag Wray still remaining FBI director is akin to Putin continuing to ‘win’ elections.

The election of PDJT was a MIRACLE (kudos to PDJT for his genius and his sacrifice and kudos to all of us who had the brains to vote for him and the fortitude to to continue to stick by him.)

We are not far from tyranny. In fact we are only one election (or two deaths) away.

Someone able to has got to come up with a picture of Putin in full germ-proof garb, but with his shirt off.

Good enough for me!

“There are no Coronavirus at the airport!”

In spite of knowing the truth, bets on how long before Putin is joining the Chinese in pushing the lie about where the Wuhan Virus originated?

I returned from Moscow on March 21.

While there, I heard definitively that nurses had been told to code cases of Corona as anything but Corona. Another example of Russia’s obsession with its image on the world stage.

When I arrived at JFK, they did not check my temperature, only asked – via a questionnaire – how how I felt and if I had visited one of several countries like Iran, China, Italy, etc. Russia was not on the list as it WAS considered a low incidence county, even though the countries surrounding Russia were on the ‘hotspot’ list. (Of course, Russia is a ‘hot spot’ country and has avoided that designation only by cheating. Some Russians say the cheating will go on until April 22 when the ‘referendum’ is held about the constitutional amendment.)

At any rate, I think the non-checking for Corona by US Government agencies at JFK is also worth reporting.