Pelosi Won’t Say If Or When House Will Pass Senate Coronavirus Bill, Adjourns for Day

Pelosi Won’t Say If Or When House Will Pass Senate Coronavirus Bill, Adjourns for Day 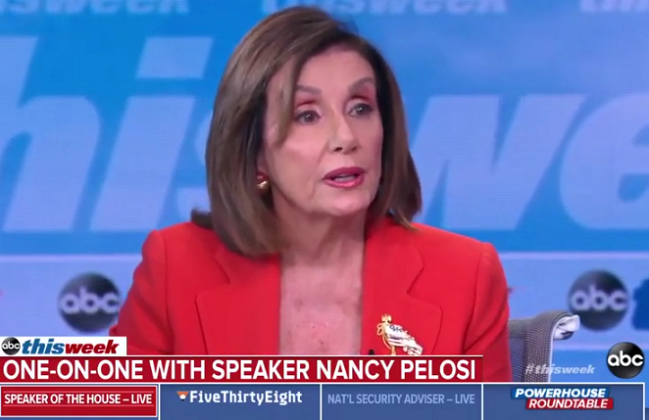 Speaker of the House Nancy Pelosi does not appear to be happy with the Senate’s $2 trillion coronavirus bill. I guess it does not have all the pork she shoved into her 1200 page bill.

Pelosi really does not think the Senate bill “did not go as far as a separate House bill.”

In a statement, Pelosi signaled that the agreement that resulted from negotiations between Senate Minority Leader Chuck Schumer, D-N.Y., and Secretary of the Treasury Steven Mnuchin is an improvement from the original GOP proposal but it doesn’t go as far as the plan she released earlier this week.

“This bipartisan legislation takes us a long way down the road in meeting the needs of the American people,” Pelosi said.

While the speaker said that it meets some of the Democrats’ demands, she did not say if or when or how the House would take it up if the Senate passes it as is expected.

“House Democrats will now review the final provisions and legislative text of the agreement to determine a course of action,” Pelosi said.

People have concentrated on Rep. Justin Amash’s criticism, but Pelosi might face a rebellion in her own caucus:

Pelosi has hoped to move the package quickly through the House by unanimous consent, allowing it to get to President Trump’s desk without calling lawmakers back to Washington amid travel concerns surrounding the spreading pandemic.

But some members of her caucus have expressed concerns that they’ve been cut out of negotiations on the massive package, conducted largely by Senate leaders and White House officials. In a conference call with House Democrats Tuesday afternoon, lawmakers expressed reservations that they would be forced to swallow the Senate bill without providing their own input.

The House is not working today. They took the day off.

My guess is when she’s done with her tantrum

notamemberofanyorganizedpolicital in reply to 2smartforlibs. | March 25, 2020 at 12:34 pm

Clearly Pelosi and all the DEM leaders across all states and DC need help with some Assisted Liv……er….Funeral Planning.

It’s well past time for tar and feathers for this evil fool.

notamemberofanyorganizedpolicital in reply to dystopia. | March 25, 2020 at 12:35 pm

So is her daughter and evidently the entire family, just like the Kennedys…..

Nancy Pelosi is a cold, mean Italian. I know because I come from a family of them. The characters in The Godfather were not exaggerated. Many of my Italian relatives are just as cold, calculating and vengeful as Nancy. It makes me sick to look at her.

Sadly RWGinger, the Dem media and the true TrumpHaters of America (I know, that’s redundant), are cheering Pelosi to fight for crap that the Dems want. It’s insanity but there are more people inflicted with TDS than CV-19.

Half the people support her and think if anything she’s too soft and flexible. Those people will vote Dem with even more enthusiasm.

They keep digging their own grave deeper and deeper. Annihilation at the ballot box in November couldn’t happen to a finer group of people.

For an answer to your question, I refer you to the last election in FL for the governor’s race. Gillum was running against Desantis and came within one percentage point of winning! Gillum was a known crook and ner-do-well as the mayor of Tallahassee FL with charges of cronyism and other misconduct in office. He was a proponent of rabid liberal causes and even with all of this info, Dems almost voted him into office. It is similar to Marion Barry when he was mayor of
DC. The only thing that matters is the “D”.

notamemberofanyorganizedpolicital in reply to RWGinger. | March 25, 2020 at 12:36 pm

They have NOT had “real elections” were “real voters” actually honestly voted them into office in years and years now.

That explains why they think they can do NON-STOP EVIL and still survive………..

Perhaps the drunken fossil needs time to dry out from the Grey Goose her brain is pickled in? Certainly not because of the concern for our country. Let’s hope the electorate remembers this.

Every Day this Witch drags her feet more Americans are at risk and are dying.

One thing this Ultra-Liberal Loser can’t postpone is the 2020 November Elections.

The D’s are done.

The majority of the House supports her.

That’s their PUBLIC face. There’s been rumblings by sensible dems for years to replace her.

Which implies they’ll do nothing useful this time, either.

Thanks for this poster Katy.

Who or what are these “sensible Dems” of which you speak? Show me one who makes any minuscule objection to any part of the Party line, no matter how outrageous the line. Their purported existence is almost surely Disinformation.

No one wants her 🙂

notamemberofanyorganizedpolicital in reply to JusticeDelivered. | March 25, 2020 at 12:41 pm

House Democrats would be crazy to not just pass by voice vote what the Senate passes in favor of holding things up longer. The public already knows who is to blame for the slowdown. If the Senate passes it today the earliest the House would be able to have a roll call vote is late Thursday or else on Friday because of the promise that there will be 24-hours notice of a roll call vote. Congrats, that’s 1-2 news cycles about them holding things up even longer!

The Senate held its collective nose and voted for the 2nd Coronavirus response bill last week. Time for the House to do the same.

Seems word on the street is that there is very little differences between the two Senate bills.

Democrats need to ask themselves if it was worth it?

She is about to start her 9th decade of life?

And it’s not like she can get any more work done. Any more facelifts, and she’s going to have a goatee…

There’s a lot to dislike about San Francisco–feces and needles in the streets–and the fact that they keep sending Nancy Pelosi to the House of Representatives.

Hard to accept: but pelosi is a gangster. Literally.

She’s warning us how to vote – or else.

We thought hillary clinton was a thug?

That depends on age and temperament, in that lots of women become really grumpy, aggressive, often like teen boys.

notamemberofanyorganizedpolicital in reply to TheFineReport.com. | March 25, 2020 at 2:18 pm

Pelosi’s Democrat Mayor of Baltimore Father was the closest consort with the Mafia there. That means he was Mafia also. Pelosi’s brother was caught in a ring of child molesters….

Who said this?
“We have to pass the bill, so that you can find out what is in it — away from the fog of the controversy.”

But we have to pass it so we can see what’s in it!

That’s what she says about HER bill, not the Senate’s.

It must have really pissed her off that people actually read her bill and told us what she was trying to get away with.

notamemberofanyorganizedpolicital in reply to 2smartforlibs. | March 25, 2020 at 12:47 pm

IT IS A WAR CRIME!

At the risk of being redundant; for a political system to continue to exist there has to be at least a baseline of credibility and legitimacy in what each side says.

The first COVID Stimulus bill was negotiated by both the Democrats AND the Republicans in both the House and Senate. The Democrats went back on their word, trashed the bill, and tried to insert their own by extortion that would have overturned the Constitution.

They got slapped down, and negotiated a second version of a COVID Stimulus bill, that was agreed to by both parties in both House and Senate last night. This morning the Democrats in the House reneged again. They declined to take the vote that they had agreed to take, gaveled the House in and out of pro forma session making it impossible to vote today and it may not be voted on tomorrow, Friday, or any day.

If the word of the Democrats is totally worthless, why negotiate with them? Why bother talking to them at all? And in ANY political system, what remains if talking is moot?

Nancy Pelosi and the Democrats are playing some very dangerous games, and there may be consequences that no one in their right mind wants, but may be unavoidable.

Just a quick clarification about why the House isn’t going to do anything today: The final version of the bill, as of this typing, hasn’t been released yet. The Senate is expected to vote on it sometime today but no one knows exactly when that will be.

They are absolutely going to vote on it after the Senate passes it; the questions are whether it’s Thursday or Friday and whether it’s by voice vote or roll call. Voice vote will go much faster than roll call, and if it’s the latter that’s when you could be talking Friday. The House will next be in session at 11:00 a.m. Thursday.

Someone needs to sit down with Ms. Pelosi, Mr. Schumer et al and have a sincere discussion about how the welfare of the United States affects their personal welfare. I’m sure that they would respond to sane, rational argument if presented in the right context. Does Ms. Pelosi own any race horses?

Surely even Democrats can see just how exceptionally bad this looks by delaying voting until the end of the week??

notamemberofanyorganizedpolicital in reply to mailman. | March 25, 2020 at 6:10 pm

They are deaf, dumb, and blind.