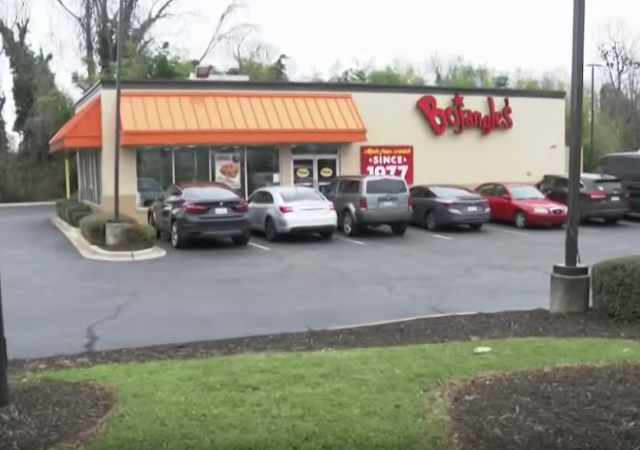 A shift manager at a Bojangles’ in Charlotte, N.C., locked out supporters of President Donald Trump after a rally.

The Charlotte Observer reported that the manager “is no longer employed” at the restaurant.

As Furick pointed out, the rally took place at Bojangles’ Coliseum, located about 10 minutes from the restaurant.

The rally had a full audience with people watching it outside in the parking lots.

To clarify, Furick said he asked people outside the restaurant why no one could get inside.

“I said, ‘Hey, why’s the door locked?’ Guy in a wheelchair says, ‘They’re not serving MAGA supporters,” Furick told WCNC Charlotte. “They had said we had trashed the place earlier.'”

As Furick looked in the restaurant, he said he only saw a small pile of debris. Furick said he made a gesture with his hand to an employee, and that’s when an employee held up his hand in a picture.

Furick believes the restaurant missed an opportunity to win over customers and make money.

“It’s not all about the Bojangles’,” he said. “It’s about every company and corporation that sits there and tries to tell us what we need to say, what we need to wear. You’re not gonna serve us? Yeah, you are, or you’re gonna get rolled over.”

Furick said he’s not going to speculate on the political views of the Bojangles’ employee, but he may be visiting other fast-food restaurants in the future.

Others have said that they will boycott the chain.

Bojangles originally said that the crowds “likely overwhelmed restaurant employees that night, which led to the doors being locked.”

The chain changed its tune on Wednesday, calling it a “bad decision:”

To all our Bojangles’ fans. An unfortunate incident happened at our store near Bojangles’ Coliseum earlier this week. A manager made a bad decision to close the dining room. We apologize. That manager is no longer employed by Bojangles’. At a different store, a customer posted a sign that is not true. We welcome ALL customers.

Then on Monday a sign appeared on a door at a Bojangles’ in Harrisburg that said employees will ask you to leave if you come in wearing Trump gear. But it was taped outside, which led some to believe the sign was a hoax.

That’s Mr. Bojangles to all y’all out there in cancel culture!

David Bromberg has an interesting version of the JJW song, and explains why JJW was in jail where he met Mr. Bojangles… 🙂

I heard the dog up and died, I still grieve.

Still have the original LP.

I have that version on my phone and still play it occasionally. Very funny, and well sung.

Now, watch. All the usual hands on hips types who comment at conservative sites will advocate boycotting the entire chain due to what a manager at one restaurant has done.

I don’t see that here, but at others.

Really? Hands on hips not a good look?

Cancel culture for the left, but not for the right?

“They bring a knife to a fight, we bring a gun.”

I’m not going to Chic-Fil-A anymore… Cut off the Salvation Army, hire a lefty for the charitable department?

I boycott.
Off of Netflix for years.
Off of cable for YEARS.
ABC News was dead for me when Peter Jennings insulted hard working American taxpayers.

But they did fire the fellow. That helps soothe the wound.

You say that as if we were leftists. Psst – we’re not.

These types of insults happen at many places and the way to treat them is the way it was done here. Expose them and let the corporate management take care of the problem. However, that being said, have any of you EVER heard of a conservative business turning away lefties?

Either we have true freedom of association or uniform enforcement of access to public establishments across all types of civil rights.

It was not Bojangles’ policy. It was that of a manager now fired. Ergo, there is no problem.

One more thing: where does one find a Wollworth’s, much less one with a lunch counter?

I hear you, but really, I’d rather have real freedom of association, and forget just adding more layers of B.S. government-imposed thought control.

Seriously, Land of the Free and Home of the Cowards is contradictory and really not befitting of Americans.

Wonder if Charlotte is a sanctuary city……

Would any other Republican have done this?

Answer: No, of course not. And this is why they oppose Trump….”

LOTS OF GOOD READING THERE.

“Their cause is open borders. Always has been.

When they say Trump is degrading our democracy, they mean: Trump is thwarting our schemes for a de facto imposition of open borders.

When they talk about their principles, they mean: Trump is short-circuiting our plan to never permit the public to weigh in on our de facto open borders plan.

They they talk about racism and xenophobia, they mean: Borders are racist and xenophobic and so are you, bumpkin racist. That’s why we have to covertly guide your opinions and limit the options you will be permitted to vote for in elections. We’re doing it for your own bumpkin-racist good.

Because they’re liars and always have been. And their schemes have never involved honestly advocating their agenda to the public — they can’t trust the Plebes to recognize how smart and wonderful their plans are — but always instead claiming to be vaguely in favor of ineffectual-by-design border security efforts ….instead of just stopping illegals at the border and kicking them out when they’re found to have broken the law.

They continue …. to find exciting new ways to Con the Rubes, and convince them that this has nothing to do with open borders — it’s just that you’re a racist if you don’t support de facto open borders, with minimal-to-non-existent border enforcement and no deportations for any illegals.

And amnesty! Lots and lots of amnesty.

Joe Biden: Moratorium on Deportations in First 100 Days
Ignorance or indifference by the press? They don’t know and they don’t care

Katy L. Stamper in reply to notamemberofanyorganizedpolicital. | March 5, 2020 at 10:44 pm

Yeah, Ace had it pedal to the metal on that post.

And LOVED the McCain vid.

That piece of human —

Well, being a civilized woman, I can’t write what I want to write.

Sue. And get this moron fired.

Boycott that dump till it happens.

The corporation says that the manager no longer works for them.

Sue? For what? Criminy, what are you, a progressive?

No lawsuit or boycott needed. Sunlight took care of the problem.

Also, this… while you were all distracted by the Corona Flu, and the implosion of the Democrats, DJT has confirmed 220 federal judges, including 2 supreme court judges.

and Barr has indicted 8 for laundering foreign money into democratic campaigns, including Adam Schiff’s

That weak-minded, and now fired, manager was just doing what the Democratic politicians at the national level, including Barack Obama, have asked him to do.

They need a more emphatic trip to the wilderness.

My last visit to a Bojangles in Charlotte will, in fact, be my last. The food was awful, the employees’ attitude terrible, and the cleanliness left a lot to be desired.

I’d rather be hungry.

Is Popeyes affiliated with Bojangles?

Trump supporters locked out tried to ask the Bojangles staff inside the restaurant why the doors were locked, but couldn’t get an answer because the restaurant staff only spoke Spanish.

“They had said we had trashed the place earlier.”

I’d have to hear a lot more about this little detail before I start slinging generalities or go into remote outrage mode.

What probably happened was that like all corporations these days they had laid off and or cut staff to the point they simply couldn’t keep up with keeping the dining room cleaning duties. And then they had the nerve to blame others for the mess and inability to perform their duties properly. (You’d think that being only 10 minutes away from the stadium and a rally they’d be properly staffed for the crowds. But I doubt it.)

Unless Bojangles is a huge exception to the rule, its stores are owned by franchisees who make all the staffing decisions for their store. It’s why despite the emphasis on consistent quality of product and service you can still have wildly varying experiences from store to store.

According to Wikipedia while most Bojangles locations are franchised, more than 40% are company owned.

I never knew there was a Bojangles.

Me either. Just like I had never heard of Chipotle until Hillary had some issue at one.

Refusing service because my beliefs differ from yours…..now where have I heard that before? Haven’t we established that this is bona fide discrimination and grounds for a massive lawsuit?

No, we haven’t, because it isn’t, except in the very few places where there’s a law saying so.

The general rule is that it is perfectly legal to discriminate on any basis you like, except those specifically prohibited by law. If I recall correctly US law bans discrimination on the basis of sex, race, religion, disability, and age over 40. I may have forgotten one or two other grounds, but that’s it. Anything not forbidden is automatically permitted.

It is perfectly legal under US law, for instance, to discriminate on the basis of sexual orientation. State and local laws often add that one to the list, but not everywhere.

Political opinion is not on the federal list, and is not on most states’ or localities’ lists, so most businesses may turn down customers whose politics they don’t like. Those that are in places that have banned it, can’t.

Tone deaf Milly…retail chains risk fiscal suicide every time they pull one of these stunts.

You could have added that into your little rant.

They take exactly the same risk when they discriminate against right-wingers. The comment was not about that, it was about such discrimination being illegal, and subject to legal penalties. I explained why that is not possible.

I for sure would consider boycotting that store, if the manager in question still worked there.

But I live in a state that was a lock for Trump from the moment he declared for president more than a year before the 2016 election, in a county that’s even more pro-GOP than average. I very much doubt the Bojangles store hereabouts would pull a stunt like this.

They threatened to accept personal responsibility, clear their own tables, and leave the restaurant better than when they arrived.

how dare they threaten to fundamentally transform fast food!