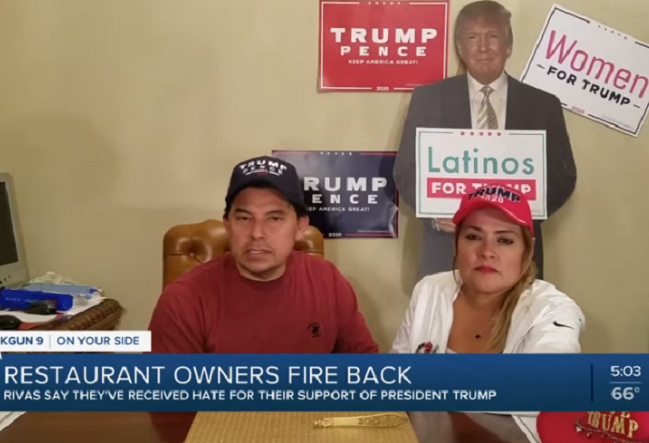 Democrats have a problem with Latino voters, and it’s very similar to the problem they have with other voting blocs.

President Trump, however, talks to every American and legal immigrant about the things that matter to them, the “kitchen table” issues.  People don’t sit around the kitchen table talking about gender pronouns and how great it would be to have transvestites do lap dances for small children. Not only does he talk to them like grownups, but he also eschews the socio-cultural lunacy that grips the left.

So it’s unsurprising that a growing number of Hispanics support the president.  That support, however, was proving costly for one pro-Trump family business in Arizona.

The owners of a Mexican restaurant in Catalina are fending off social media attacks after appearing in the VIP area at Donald Trump’s Phoenix campaign rally last week.

That post on Grupo de Palfeis, which is a marketplace where its 109,000 members can advertise goods and services, attracted more than 230 comments — pretty much all of them negative.

The conversation then moved to Sammy’s restaurant’s social media including its Yelp and Google reviews.

The couple and their family business were inundated with “woke” hate and defended themselves admirably.

“Very ugly stuff. They are saying nasty stuff about the restaurant,” owner Jorge Rivas said Friday, a day after he and his wife posted a video on Facebook defending their rights as “naturalized American citizens” to vote, support and meet whomever they please.

“Just because we are Latinos, it doesn’t mean that we have to feel like every other Latino in this country,” Rivas said in the video. “We are individuals and we feel that we have the constitutional right to meet and support whoever we want.”

President Trump heard about the backlash his supporters were facing and promptly defended them.

In fact, there has been an outpouring of support for this family business the “woke” left is trying to cancel.

Business is booming at a restaurant north of Tucson after owners say they stood up to online detractors.

That, and a tweet made from the President made for a busier than normal lunch rush Monday.

. . . . “I don’t feel that it is fair that they are receiving so much hate and anger because they have openly expressed how they feel,” said Raul Rodriguez from Sahuarita, who was at Sammy’s Monday.

. . . . “We are from San Tan Valley, never been here before we saw on the news they have had backlash so we came to show our support,” Lorna Nevitt said.

Rivas says he wasn’t trying to get publicity, but says he appreciates the support.

After Betty Rivas was spotted in the audience at President Trump’s Feb. 19 rally in Phoenix, negative reviews began hitting the Facebook page for Sammy’s Mexican Grill.

“Wonderful restaurant!” wrote one reviewer. “Great prices and greater food! The wonderful owners are the epitome of the American dream!”

When does the Walk Away movement become a full-tilt stampede?

God I hate the left
I’m ready to be done with them
If they can not be civil, if they continue abusing Americans and destroying their lives, it maybe time to give them the state of California and NewYork and be done with them
Anyone who agrees with them
Must move with in 6 months.

That or civil war, we did it once, we can revisit that option again

Yeah don’t ever give an inch, like Trump, keep fighting, it’s our Country and we will fight for all 57 states

They can have Puerto Rico though… 60% on American welfare, I just don’t think they are up to it to be true American citizens.

”… if they continue abusing Americans and destroying their lives, it maybe time to give them the state of California and NewYork and be done with them…”

Wait, wait… not that fast… the left doesn’t own California or New York either, but the higher density population centers (like Los Angeles and New York City). They can have those and leave the Central Valley, upstate New York… you know, the rural areas that produce food and energy to us. We’ll wait until they find out that their groceries doesn’t grow in a Whole Foods store…

Give them Imperial and San Diego (minus the costal municipalities & Federal installations) counties & tell’em to pound sand- literally. NY’s commies can go & never have to worry about snow again, too.

notamemberofanyorganizedpolicital in reply to Ulises. | March 3, 2020 at 7:28 pm

What would happen if places like NY or CA had an Electoral College by county when voting for statewide offices?

I “hate” the rhetoric of hatred. It’s not only poisonous, but it’s lazy.

How about we just kick all the New Yorkers out and make them move to California? Then, we wall off the state and anyone who wants to leave it for any reason is treated like any other foreigner visiting our country?

I dont know about full tilt stamped, I was at the voting booth here in Williamson county Texas, was always red, but last election 2018 voted slight blue, it actually had more Beto votes than Cruz
That was a shocker and eye opener
Today 3 times the Dems voting than the republicans, I get it it’s more important for Dems but really?

notamemberofanyorganizedpolicital in reply to gonzotx. | March 3, 2020 at 7:29 pm

But how many of those in the “Dem” voting lines were really GOP?

You’re too close to Austin. We’re having the same problem in Comal. 20 years ago when I moved out here we had a 9-1 advantage in a rural county. Now suburban San Antonio has grown right up to and past us, and we’re down to around 2-1 Republican.

And Bernie supporters all seem to think that Latinos all love Castro’s Cuba.

I’m glad we on the right don’t live on this kind fo hate. Think how tiny you life must be when you hate everything and everyone.

Imagine the thousands of Latinos who just learned English and now are being told that all of the pronouns they learned are incorrect! Trump should make that a campaign issue.

Huffpost: A Guide To Non-binary Pronouns And Why They Matter.

I had a similar experience. I wrote the MOST anodyne comment on twitter referring to the Religion of Peace (TM), and the next thing I knew, I got a couple of reviews that accused me of racism, etc., and a telephone message that went right up to the edge of a threat.

Yep, they’re barbarians, and reveal it for all to see.

It amazes me how casually they throw out the Racism card – exactly what race is the “Religion of Peace (TM)?”

Correct. Islam is not a race. Radical Islam is evil.

Have you read the Koran? ALL Islam is evil.

Any time the Left goes after a business, it is up to the rest of us to negate their negativity by offering a little support to those businesses whenever we can. If I happen through Phoenix, I’ll stop there for lunch (instead of my usual Chick Fil-A lunch on the road).

And Betty is kind of hot…like the food.

“…to have transvestites do lap dances for small children.”

Please tell me this has not happened. Anywhere. Ever.

Some of the things going on in public libraries with young children and transvestites these days are appalling. You should Google it and see.

I urge them to keep up their thuggish and childish antics, to demonstrate their moral bankruptcy, their discredited ideology and their corrosive ideological purity tests.

The faux masks of alleged “diversity” and “tolerance” have long been removed, revealing the ugly totalitarian visage, beneath.

Remember Chik-fil-a Day? It sounds like the Tucson locals organized an impromptu Sammy’s Day. Great to see it.
.

So POTUS tweeted:
> The food is GREAT at Sammy’s Mexican Grill in Phoenix, Arizona.
Hey, let’s start impeachment proceedings again. He’s trying to influence the election by being nice to a supporter!