“The campaign offered a meeting with the senator if they would leave the stage after being on stage for more than an hour. After the group initially agreed, they backed out of the agreement and we are canceling the event.” 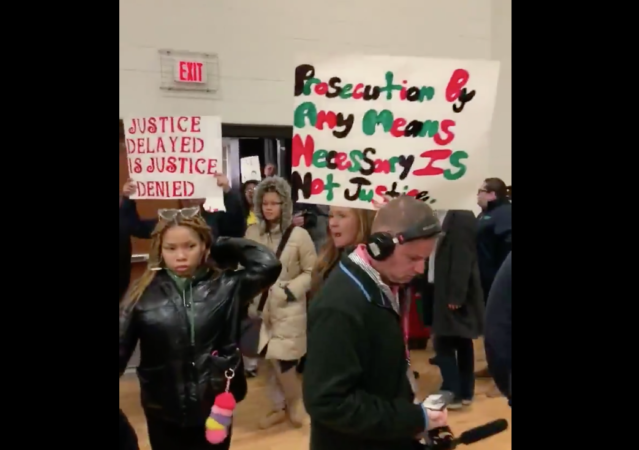 A “welcome home” rally for Democrat Presidential hopeful Sen. Amy Klobuchar was not the warm, boisterous greeting she’d hoped for.

Protesters infiltrated the school gymnasium shouting “Myon” (a black teenager convicted in a child murder case in 2002) and “Black Lives Matter.” Klobuchar’s campaign cancelled the event as a result.

Demonstrators protesting Klobuchar’s handling of the Myon Burrell case as a co prosecutor pour into the gym where the senator is set to rally supporters. They want her to drop out. pic.twitter.com/98HRr1MRUA

More from the Star Tribune:

Sen. Amy Klobuchar returned to Minnesota on Sunday hoping to pivot to Super Tuesday after a distant sixth-place finish in the South Carolina primary.

But while hundreds of supporters gathered for her homecoming in a St. Louis Park High School gymnasium, dozens of protesters streamed in, chanting for her to exit the race over her handling of the case against Myon Burrell, a black teenager convicted in a 2002 child slaying when Klobuchar was Hennepin County attorney.

As protesters took over the stage shouting “Myon!” Klobuchar supporters shouted “Amy!” back. Klobuchar was not in the gymnasium as the protest unfolded, disrupting the start of a program of campaign speeches. The ongoing protest eventually forced the campaign to cancel the rally. “The campaign offered a meeting with the senator if they would leave the stage after being on stage for more than an hour,” a campaign spokesman said. “After the group initially agreed, they backed out of the agreement and we are canceling the event.”

Protest leaders said the campaign would not meet their demand to publicly acknowledge Burrell during the rally.

The event was planned as Klobuchar seeks to salvage momentum for a long-shot campaign low on cash and in a downward trajectory since a surprising third-place result in New Hampshire on Feb. 11.

With Mayor Pete dropping out and Obama meddling behind the scenes, it looks like not-Bernie support, at least from the Democrat base, seems to be coalescing behind Biden, who just won South Carolina’s primary. Klobuchar hasn’t broken out of mid-pack the entire primary, so this seems a little overly aspirational:

A source with knowledge of the @amyklobuchar campaign’s workings says “Plans are being made post #SuperTuesday. The staff is operating under the assumption they are moving forward.“ Those plans include working on staffing plans for the March 10 states.

So, after the temper tantrum had run its course (which, it seems, was the sole goal and as far-thinking as the protesters could cogitate…

The summation of the exercise was…

It really didn’t matter that much at all.

That’s about what we thought.

Notably, the police refused to assist. Likely at the mayor’s direction. There is a dangerous trend going on in blue cities re law enforcement.

At some point people will start enforcing the law themselves. Heck, perform a bunch of citizen arrests and hand them over to the police.

Screw the “citizen’s arrest” thing. I’m not being paid to do the police’s job. Just grab them and beat the fucking shit out of them (off camera) and then kick their sorry asses out the door. Do that a few times at a few rallies and I guarantee you that these assholes will think twice about disrupting things.

Hand them over to the police…. then what? Nothing will happen.

And rest assured, if I was in charge of the rally I’d have a private security squad on hand to deal with assholes like this. They’d be hustled out of the room and building in no time flat and to hell with them all. And as for the police? They’d get a politely worded letter stating that since they obviously weren’t doing the fucking job they were hired to do they won’t get paid. Period.

In relation to another story did they also demand a Popeyes chicken in every district?

No; they were far more pushy than that. A Popeye’s and a Rent To Own.

The democrats are alienating blacks. I’m not sure Michelle on the ticket would mollify them.

Joe is the only candidate who might win the black vote, and he’s still got Hunter problems.

A Dem/Prog profile in disaster! Giving in to a group of thugs whose reason for existence is built on fraud. Blue state standing by is tacit approval.

How many protesters were there to protest the murder of the child?

Any group of protestors … no matter what their cause, color or whatever … should not be allowed to prevent the public from hearing what a political candidate has to say.

For their selfishness … shame on the protestors

This is so awesome, love this.

They created this monster, now it is attacking them, and they haven’t the slightest clue how to deal with it.