Justice Dept. Memo: Americans who purposefully infect others with coronavirus could be charged as terrorists

Justice Dept. Memo: Americans who purposefully infect others with coronavirus could be charged as terrorists 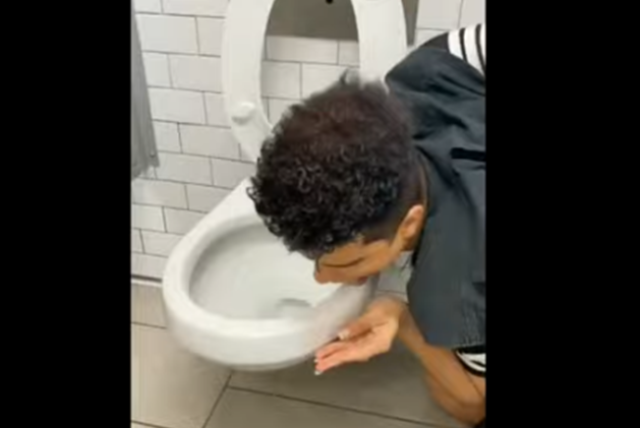 Recently, a 26-year-old Missouri man was seen in a social media video licking items at a Walmart to mock fears of the coronavirus pandemic.

I suspect the type of attention he received was not quite what he originally envisioned.

Cody Lee Pfister posted a video of himself licking deodorants at the Warrenton store on March 11, according to court documents. As he wiped his tongue across the packages he asked, “Who’s scared of coronavirus,” according to the St. Louis Post-Dispatch.

Pfister was arrested on Monday.

The City of Warrenton Police Department in a Facebook post that said it received calls from local residents as well as people overseas in the Netherlands, Ireland and the United Kingdom to report the video.

“We take this incident very seriously especially with this infectious disease and the state that the country is in,” Lt. Justin Unger told NBC News. “We take these things seriously to protect our community.”

Pfister was charged with making terrorist threats, which aligns with a new U.S. Department of Justice memo specifying the charges that can be brought against those who intentionally expose and infect others.

Americans who deliberately expose and infect others with coronavirus could face federal terrorism charges, according to a new memo sent out by the Justice Department.

The document, signed Wednesday by Deputy Attorney General Jeffrey Rosen and sent out to US attorneys and law enforcement heads across the country, declares that: ‘coronavirus appears to meet the statutory definition of ‘biological agent’ under 18 U.S.C., [which means that] such acts could implicate the Nation’s terrorism-related statuses’.

‘Threats or attempts to use COVID-19 as a weapon against Americans will not be tolerated,’ the memo further stated.

…The Justice Department memo was released one day after a New Jersey man was charged with making terrorist threats after he allegedly coughed on a supermarket employee while claiming he was infected with coronavirus.

Meanwhile, others are engaging in the “Coronavirus Challenge” to gain social media fame. This is working out as most sensible people would expect.

A California social media prankster claims he was hospitalized with the coronavirus — just days after posting a video of himself licking a toilet bowl for a nauseating online challenge.

The TikTok personality, known as Larz, reportedly posted footage of himself in a hospital bed on Sunday, according to the Daily Mail.

“I tested positive for Coronavirus,” the 21-year-old from Beverly Hills tweeted on an account that has since been suspended, the outlet reported.

It comes just two days after the prankster, who goes by the social media handle GayShawnMendes, posted a video himself on Friday running his tongue across a public toilet as part of a bizarre — and widely criticized — “Coronavirus Challenge” on social media.

Finally, there are “Virus Rebels” planning parties and social events in defiance of state stay-at-home orders. The City of San Francisco is planning to shut down one of these events.

The San Francisco City Attorney has directed the owner of a club venue to cancel an illegal party being planned in violation of the city’s shelter-in-place health order to help stop the coronavirus spread.

The promoter’s website has been offering tickets to the event as recently as Wednesday morning, with prices ranging from $5 for “guest list” purchasers to $780 for a VIP package of tickets, private booth and two “premium bottles.” The tickets are listed as nonrefundable.

If one of those “rebels” becomes infected, then spreads the virus to a loved one who is vulnerable, that could be a very tragic consequence to mocking the current public health policies.

I guess everything can be declared terrorism here days.

Well, that is what “terrorism” means.

These actions are more dangerous than bomb threats.

Bomb threats which are not accompanied by a real bomb are harmless, in the sense that nobody can be blown up. But they still cause disruption of business, and general unrest—that’s the “terror” part.

These “pranks” are more dangerous, because if the miscreant is in fact a carrier of the virus, he’s like someone who phones in a bomb threat but doesn’t even know if he has an actual bomb or not.

But nothing much will happen as long as officialdom merely rattles the paper sword of “may be charged.” Let’s see come convictions and jail terms; without something concrete, these idle threats will merely enhance the “cred” and prestige of these jerks.

Anyone want to opine on the generation the corrupt infantile toilet-licking narcissits will breed?

It’s hard to breed when all these wankers do is sit in mommy’s basement looking at a screen.

notamemberofanyorganizedpolicital in reply to TheFineReport.com. | March 30, 2020 at 5:31 pm

Well to be honest those “liberals” were mainly made in the Communist infected government school systems……….

Terrorism is usually defined more or less as intentionally using arbitrary violence against civilians and it’s threat to impose a political outcome.

So, extortion in the large, when you’re not a state.

Given that definition, what’s the substantive difference between terrorism and performance art?

I’m thinking most legislation, n nearly all regulation, too.

I’m glad my parents aren’t here to see this … on the other hand, I wish 50 years ago I’d known what these times would be like, so when my parents accused me of “doing something dumb” when I was a teenager, I could have shown them what real dumb is.

Gee, why am I not surprised he goes around in public licking stuff?

I this fool does have the Chinese Virus, I might suggest that they stop wasting a hospital bed on him, being they are in short supply, and he certainly should not get a respirator. He picked the music, he has to dance to it…

If the whole thing is real…

I was thinking likewise. Take him home and lock him in with a bottle of Tylenol and antihistamines. Go back and check on him a week later.
.

Ibuprofen would be better.

Terrorism? I don’t like the charge. Charge him for stupidity and make him work it off in a morgue. He can handle the ones that died from Covid19.

And anyone pretending to be infected should be infected with a gallon of their blood type just filled with the virus.

You do, I hope, recall that these are the same people who were staging “AIDs parties”, where they engaged in sex with AIDs infected partners a few years ago?

Parents do this to their own children.
https://thehill.com/policy/healthcare/438150-new-york-officials-warn-parents-to-stop-holding-measles-parties-amid-latest

Knowingly spreading coronavirus will result in a felony charge of terrorism in the USA.

Knowingly spreading HIV will result in a misdemeanor in California.

All these nicknames for these younger generation – we finally have one that can sum them all up: the toilet-licker generation.

Licking a toilet seat isn’t going to give you the Chinese coronavirus. I’m sure it will give you a whole lot more though!

notamemberofanyorganizedpolicital in reply to buckeyeminuteman. | March 30, 2020 at 5:33 pm

REPEAL HIV Discrimination Act was the abbreviated name of the ‘Repeal Existing Policies that Encourage and Allow Legal HIV Discrimination Act’ (H.R. 3053), also called the REPEAL Act, proposed legislation that was introduced in the U.S. Congress on September 23, 2011, by Rep. Barbara Lee (D-CA)

is it too much to ask that admins enable the wordpress bbcode in comments please.
having to manually type codes leads to errors like I just made and I know wordpress allows editor to use bbcode.

Chucky Darwin should have kicked in by now.

Really, on the best of days, toilet licking?