The Communist Chinese propaganda machine is expertly playing “woke” Americans and the left’s obsession with identity politics. As Italy showed, these false accusations of racism over correctly naming the source of the coronavirus can have deadly consequences. 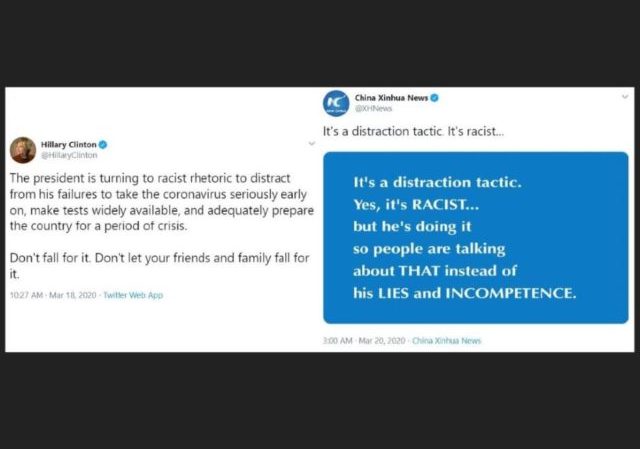 Two weeks ago we noted that Democrats and the media were attacking Trump as racist for using the term “China virus.” That was part of a wide effort not only to ban that term, but any term tying the coronovirus to China.

That effort started from the moment Trump restricted travel from China. That decision, now recognized at buying the U.S. critical time, was called racist and xenophobic, including by Joe Biden:

Stacey laid out the details and dishonesty of the attacks in Media, Democrats Rush to Declare ‘Wuhan Coronavirus’ Term Racist – Except It’s Not:

The mainstream media and Democrats have chosen to politicize the heck out of the virus instead, a tactic that will only generate more division, confusion, and panic.

Case in point, the rush to declare the use of the term “Wuhan virus” racist instead of referring to it as the coronavirus. They chose to do this even though the strain of coronavirus we’re dealing with stems directly from Wuhan, China ….

Remember, not that long ago it was members of the mainstream media who referred to the virus as the “Wuhan virus:”

Those in the media have been the ones calling it "the Wuhan virus/coronavirus" for weeks, so I guess they were being racist/bigoted this whole time. pic.twitter.com/ibogMw3rK0

In making these false accusations, Democrats are playing into the Communist Chinese propaganda campaign that seeks to absolve itself of responsibility for concealing the seriousness of the virus outbreak in Wuhan by distancing the virus origins from China

It’s all described nicely in an article at The Atlantic, China Is Avoiding Blame by Trolling the World:

Some American commentators and Democratic politicians are aghast at Donald Trump and Republicans for referring to the pandemic as the “Wuhan virus” and repeatedly pointing to China as the source of the pandemic. In naming the disease COVID-19, the World Health Organization specifically avoided mentioning Wuhan. Yet in de-emphasizing where the epidemic began (something China has been aggressively pushing for), we run the risk of obscuring Beijing’s role in letting the disease spread beyond its borders….

But is this a time for blame? Yes, it is. Accounting for responsibility when a disaster happens—particularly one likely to devastate entire countries, leaving thousands dead—is not beside the point, particularly as Chinese officials move to take advantage of the crisis and launch a disinformation campaign claiming that the U.S. Army introduced the virus.

Well before the new coronavirus spread across American cities, the Chinese regime was already rather creatively trolling U.S. publications, expelling American journalists, and “weaponizing wokeness” over anything it perceived as critical of China’s role in mishandling the epidemic. To hear Chinese spokespeople use the language of racism and prejudice is somewhat surreal, considering this is a regime that has put more than 1 million Muslims and ethnic minorities in “reeducation” camps.

Those American critics who raise the racism canard are themselves inadvertently collapsing the distinctions between an authoritarian regime and those who live under it….  A government is not a race. It’s a regime—and easily one of the worst and most brutal in our lifetime. Criticizing authoritarian regimes for what they do outside their own borders and to their own people is simply calling things as they are. To do otherwise is to forgo analysis and accuracy in the name of assuaging a regime that deserves no such consideration.

Guess who has taken the lead in playing the racism card? Hillary Clinton. 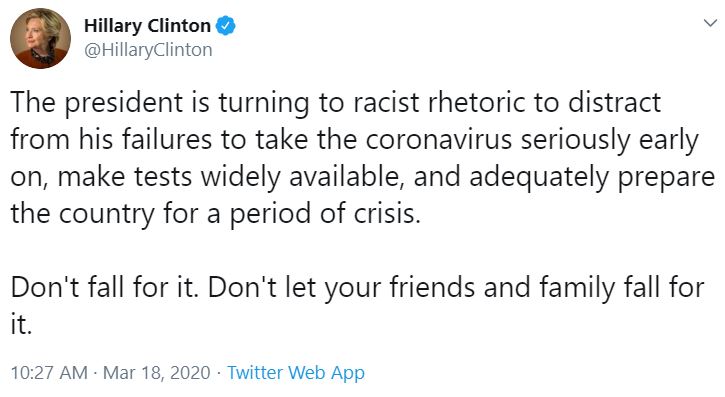 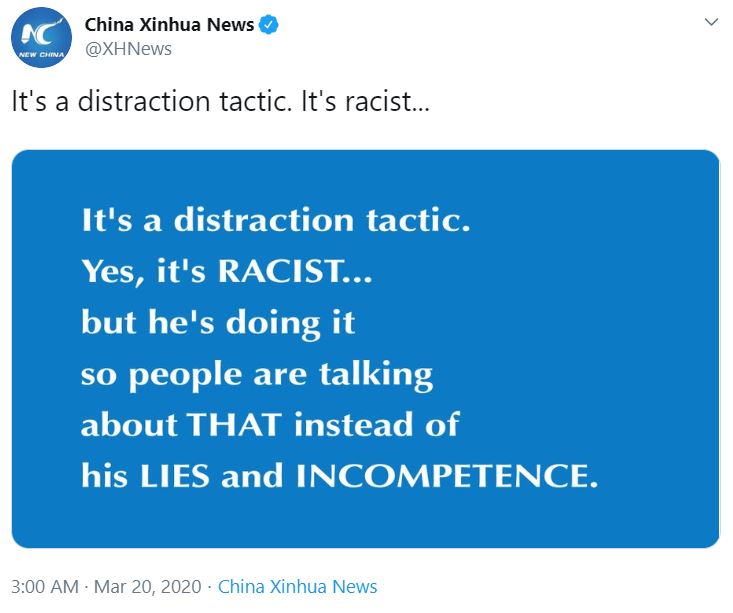 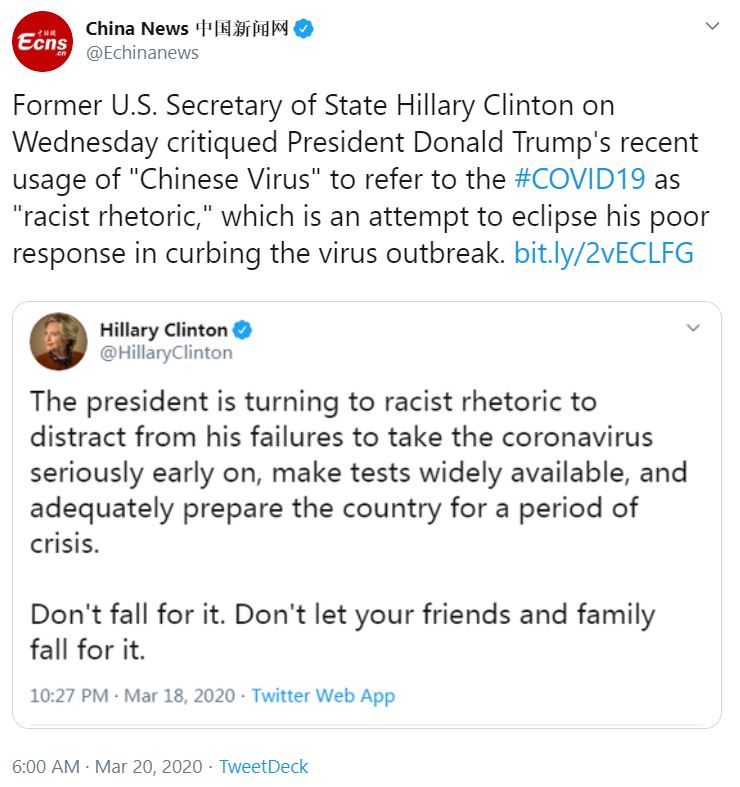 None of this is merely misguided. The Communist Chinese propaganda machine is expertly playing “woke” Americans and the left’s obsession with identity politics. As Italy showed, these false accusations of racism over correctly naming the source of the coronavirus can have deadly consequences.
More Sharing Options

Hillary clinton is a traitor. Anyone arguing against that is quite ignorant of who this demented freak is, and her heinous, theiving, and wholesale sedutionous acts over the past DECADES.

The maggot is squarely in the Chi-Comms’ pocket, having been bought out way back in the 90’s, when bill clinton first betrayed our country, lining his pockets in giving the Chi-Comms secret military tech.

Until clinton dangles at the end of a rope, our justice system remains an open joke, and our nation remains in two classes: the small but powerful looting class, and the rest of us who pay for it.

If you need a laugh, this is screamingly funny (wait for the PDJT and Pence reactions after the useful idiot ‘journalist’ speaks):

notamemberofanyorganizedpolicital in reply to TheFineReport.com. | March 23, 2020 at 11:45 am

Time to tell them to pound themselves into the sand.

I prophesize that their very own members are going to take care of them.

If Hillary Clinton’s life story were a movie it’d be titled, “The Thing That Couldn’t Just STFU And Go Away.”

No, it’d be called: “The thing the justice department refuses to hang”.

So, what do we call the next Chernobyl? Fukushima?

All these dem assholes are probably taking $$$ to parrot the ChiCom line. Or they are just severely afflicted with TDS. Maybe a combo of both. I hope someone from the Chinese military puts some lead in Xi’s head!

Walls, that is a GIVEN, and been proven many times.

Hillary’s grasp at relevance for her and her aging cohorts is pathetic.

Nah, nobody’s that stupid, especially someone surrounded by people who need her image to be somewhat credible because of all the bribes they’ve paid her.

Hillary clinton is a traitor.

The clintons and their cronies have been awash in chicom money for decades. This includes the GOPe. Once they secured the politicians, the chicoms bought their way into every sector of the American economy. This is why a$$ hats like lebron james are anti-free speech and pro-chicom. When you see these big money people spouting chicom propaganda, all you have to do is follow the laundered money. I hope they enjoy their fourty pieces of silver.

Come on. Who downvoted that?!

Not me. I’m here for the big picture, discussion, to give my opinion and hear other’s. You and I often have differing opinions Milhouse, but it isn’t personal and I appreciate that. I don’t agree with you the majority of the time but I get the sense you’re a decent person and we simply have had different life experiences.

notamemberofanyorganizedpolicital in reply to The Friendly Grizzly. | March 23, 2020 at 11:48 am

Might have been God who done it, Milhouse. Don’t ride your horse under any low-hanging branches, venture outside during a thunderstorm, etc.

I have only one problem with calling it the “Chinese virus”: There are hundreds of viruses that originate in China. Pretty much every year’s strain of flu comes from there. So “Chinese virus” is not specific enough, whereas “Wuhan virus” or better still “Wuhan Disease” is.

Maybe you should become Trumps advisor ??

It not only highlights the origin of the virus BUT keeps the chings in the media crosshairs because the Denocrat Chinese media refuses to let this go and the longer it stays in the media the more people who will understand that China deliberately kept this Chinese virus from the world while millions of its nationals freely travelled around spreading the infection without care.

So fuck the Chinese and their Chinese virus.

chicom virus?
ccp virus?
workers paradise virus?
each according to his needs virus?
seize the means of production virus?
virus which began on mainland china born of third world conditions but hey, who am I to judge virus?

So many choices, I can’t decide. Guess I’ll stick with chinese virus.

She would want to stay in the news if she’s conniving to snag the D’rat nomination again. It doesn’t matter what she says, so long as it grabs headlines.

The Dhimmi-crats are vile hypocrites and self-serving opportunists, and, vile and corrupt crone, Hillary, is their standard-bearer.

Dhimmi-crats have absolutely ZERO credibility/currency to brag about their allegedly sagacious coronavirus response, or, tangentially, to criticize Trump’s response, given that these fools and idiots staunchly and indefensibly opposed the common-sense China travel ban that undoubtedly saved thousands of lives and slowed the virus’s spread in the U.S., and, further, given that these morons have been agitating in favor of open borders and unrestricted immigration, for the past five decades.

Dhimmi-crats should keep their utterly useless, grandstanding and miserable mouths shut. They are plumb useless. I wouldn’t trust these morons to clean a toilet.

We’ll get through this, and, then, we’ll concentrate on ensuring POTUS’s re-election over dim-witted and corrupt Biden, who foolishly opposed the China travel ban, like his moronic Dhimmi-crat brethren.

Let’s see the Democrats defend their already-indefensible “open borders” policies, now — I want to see how they rationalize lax immigration enforcement, after this crisis. Idiots.

Old hag with under lying medical conditions is prime chance for the world to be rid of the witch.