As President Trump was putting together the Wuhan Coronavirus task force in January, House Speaker Pelosi focused on his removal from office. 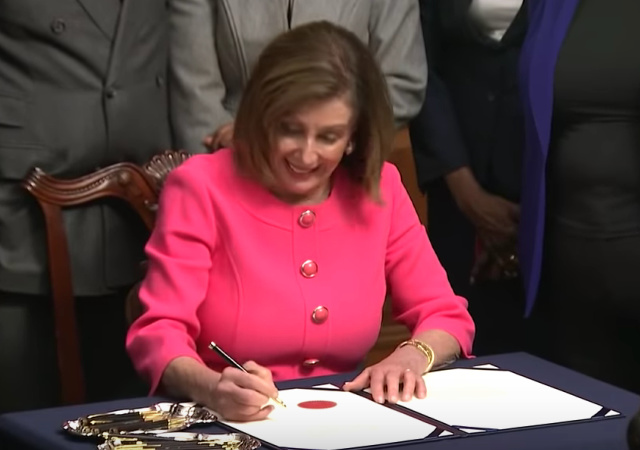 House Speaker Nancy Pelosi (D-CA) appeared on Jake Tapper’s State of the Union program on Sunday to talk about President Trump’s efforts at combating the Wuhan Coronavirus outbreak so far.

Not surprisingly, Pelosi didn’t have anything good to say. She took the opportunity presented by the CNN host to accuse Trump of “fiddling” as people are dying:

Pelosi also hinted there would be an investigation into the administration’s handling of the pandemic once things go back to normal.

“I don’t know what the scientists said to him,” Pelosi stated. “When did this president know about this, and what did he know? What did he know and when did he know it? That’s for an after-action review.”

“But as the president fiddles, people are dying. We just have to take every precaution.”

“As the President fiddles, people are dying. We just have to take every precaution.” #CNNSOTU pic.twitter.com/nZCmCB12jG

In response, Sen. Lindsey Graham (R-SC) called what Pelosi said “the most shameful, disgusting statement by any politician in modern history.”

What Pelosi basically stated is that the Trump administration’s handling of the Wuhan Coronavirus crisis will be the Democrats’ new impeachment. This is rather interesting when you consider the House and Senate Democrats’ obsession with Trump’s impeachment and removal was ramping up as the president was forming the Wuhan Coronavirus task force and putting travel restrictions on China in January.

Several Republicans were quick to point this out:

When @realDonaldTrump formed the Wuhan #coronavirus task force in, Nancy Pelosi was passing out her impeachment pens. pic.twitter.com/VhAt8RxB0x

Nancy Pelosi is accusing Trump of not responding fast enough to the Chinese coronavirus.

You’re not fooling anyone, Nancy.

Criticism and finger pointing are not the hallmarks of great leadership. In January the President was establishing a task force and re-routing flights, while house leaders were busy prosecuting impeachment… When united we are undefeated. CA49
https://t.co/SeGuVaKpw0

– Nancy Pelosi was still caught up with Impeachment. https://t.co/xS5vFnfCOI

Earlier this month, GOP Chairwoman Ronna McDaniel put together a whole thread detailing what the Trump administration was doing while Democrats focused on ousting him from office:

What were Congressional Democrats focused on?

Writing their opening arguments for their bogus impeachment trial. (2/8)

JAN 27: A tale of 2 press conferences.@Mike_Pence outlined the administration’s efforts to work with China to counter coronavirus.

JAN 31:@realDonaldTrump initiated travel restrictions from China, which the experts have praised as a critical decision to slow the spread of coronavirus.

The Trump administration secured commitments from top pharmaceutical companies to develop a vaccine to fight coronavirus.

Democrats began “quietly discussing moving ahead with punishments for individuals who defied subpoenas” in the impeachment sham. (7/8)

Joel Pollack also put together a detailed timeline a couple of weeks ago of the Democrats’ actions in January as the virus was spreading in China and beyond, and as WHO and the Trump administration were warning of the virus’s spread.

If Pelosi does push forth with that “after-action review” once the worst of the Wuhan Coronavirus is (hopefully) behind us, expect continued pushback from Republicans who will return the favor to her in kind.

has she had a stroke?? Not being critical she like Quid Pro Joe seem to have issues with reality.

notamemberofanyorganizedpolicital in reply to 2smartforlibs. | March 31, 2020 at 5:31 pm

It seems like Dems are suffering from their own pandemic, one causing a nearly complete break with reality, flirting with insane.

Pelosi is the ultimate swamp rat: as corrupt, as hypocritical, as anti-American as they come. Her reality is no different than any sleazeball looting from the masses and living amongst the privileged.

She might as well have gotten rich selling fake cancer cures to dying people.

But who is worse: her, or the people who protect her and her ilk, like sessions did and barr does now?

notamemberofanyorganizedpolicital in reply to TheFineReport.com. | March 31, 2020 at 10:28 pm

RE:
“She might as well have gotten rich selling fake cancer cures to dying people.”

What proof is there she didn’t?

Notice how things that are VERY LUCRATIVE never make advances faster than a frozen snail at the North Pole in February.

For awhile there, she was way worse than Biden. Then, she suddenly became almost coherent. I wondered if she was on some new, more effective medication. However, it seems to be leveling off now and her symptoms are showing again. I think she has some form of dementia. I’m only speculating, of course, but I’ve had family and older friends with dementia and recognize many of the signs in her and in Biden.

While every piece of history is replete with errors, as after the facts have happened, people try to put things together into a cohesive whole. There are always going to be erroneous things brought in to change perception, and bias will always play a role in how the narratives progress.

Pelosi is a vile, evil woman. There is no way she can square up what her actions and deeds show with her claims of being a Catholic Christian. I wonder if she puts Holy water on herself, does she start to melt and burn? She should for all the evil she supports and pushes.

Does she ever have a lucid moment. She hold family reunions and spend quality time with her “subjects” such that they may all share a common experience.

One for all, all for one.

Pelosi reminds me of George Orwell’s writings, all the scheming, totally ignoring truth. My work on the Hill always involved bipartisanship. That was key to getting things done. Today’s democrats are nothing like those I worked with. This shift in attitudes is so extreme that I don’t think they should be called Democrats, are they really the same as what the party used to represent?

Hardly. I expect very little from Republicans. At best, they’re all talk (and usually not even that).

All persons living in the State of Maine are hereby ordered, effective as of on
April 1, 2020 to stay at their homes or places of residence (?homes?) except:

Call her what you will but Pelosi is a doer. Gung-ho. Can’t argue about that.

When McConnell has a mind to do something he gets it done; judicial appointments; reading Schumers threats into to congressional record.

What he hasn’t done – and pointedly so – is to use his authority to appoint a special committee to push back against Pelosi’s sham show trial investigations.

When Christie Pelosi said “Rand Paul’s attacker was right,” McConnell felt such a thing didn’t rise to the level of implied threat; ignoring the fact that Paul lost the lower portion of his lung due to politically motivated violent attack (and places him in a high risk medical group) being exactly the thing which he McConnell so vociferously opposed regarding Schumer’s call to arms.

Isn’t it odd? I find it incredibly odd and then wonder about McConnell’s strange way of going about the business of Majority Leader.

Now you know why the American people want the end of RINOS.

Lucifer Morningstar in reply to notamemberofanyorganizedpolicital. | March 31, 2020 at 10:50 pm

Actually, I’m beginning to think I want an end to the whole damn thing. Wipe the slate clean and start over again on a more rational level. And make sure any government that is created cannot ever evolve into the horrific thing that our present government has become. And to do that means out it all goes. The democrats, out. The Republicans, out. The Independents, out. The Libertarians, out. The RINOs out. The SCOTUS justices out. The SCOTUS, gone. The federal courts, disbanded, The federal judges, gone. The administrative state all fired. Everything gone. From top to bottom. Scorched Earth to it all.

I think that any government, no matter how well it starts out, eventually devolves into what we have now and worse. It’s just human nature to devolve to the lowest common denominator and politics attracts those types of people.

re: “Call her what you will but Pelosi is a doer.”

Yes,she’s a doer that will ‘do you’ if you don’t obey her every whim. Greed, lust for power regardless of the consequences or pain towards others. Lacking scruples of any acceptable society other than those of a crime family…yeah, she’s a doer. People will cheer when someone does her.

There is N O T H I N G McConnell can do. The Senate is the Senate and the House is the House. Don’t be a hapless tool.

We are going to have the nastiest campaign ads this fall. It will be quite entertaining.

Q. What’s the difference between Wuhan and Las Vegas?

A. What happens in Vegas, stays in Vegas.

Ronna McDaniel is a national treasure.

If only she could slap some sense into her uncle.

When will we be able to sing “ding dong, the wicked witch is dead”? Nancy Pelosi is a carbuncle on the body politic.

notamemberofanyorganizedpolicital in reply to Comanche Voter. | March 31, 2020 at 10:30 pm

I’d call her a Hemorrhoid Cluster…….

Nancy Pelosi runs the House like a prison; Folsom Prison. This one’s for you, Nancy:

I’m convinced that Pelosi thrives on the hatred pointed towards her… In some way it seems to energize her.

And now, because Hee-Haw!

So my fun task is to take advantage of the empty newspaper boxes to leave 9×12″ messages where the paper would normally reside in the front pane. Some favorites are “The Constitution, 1789 – 2020, it was fun while it lasted.” “Where is Biden Hidin? I think I owe someone here for that. A suggestion from a friend, “where have you gone, Joe Demnetia?” with random music notes in the border.

That being said, people in my Portland neighborhood are getting fed up and are getting out. Traffic has been increasing each day. A week ago I could cross SE 39th without looking. Now I have to pay attention to signals and cross at corners. A large park had its parking lot closed because too many people were going out for walkies. Mornings are still quiet but by afternoon there is lots of foot and bike traffic on all streets. Our most recent 3 deaths were 80, 91, and 91, so I think people are starting to question the need and wisdom of the steps which have been taken given the high cost to the economy. One site forecast 35K deaths, and if they are at an age, say, only 2 years less than average life expectancy, then that works out to about 1200 teenagers a year in lost life years, which is about how many teens drown each year. Perspective in this was lost a long time ago, IMHO.

We should call it the Democrat Media Flu.

When are we going to yank San Fran Nan off the national stage? Hmmmmm?

When her constituents stop voting for her. I know there’s a minimum age to be in Congress, but I’m not aware of any maximum. She could go on for years if they keep voting for her.