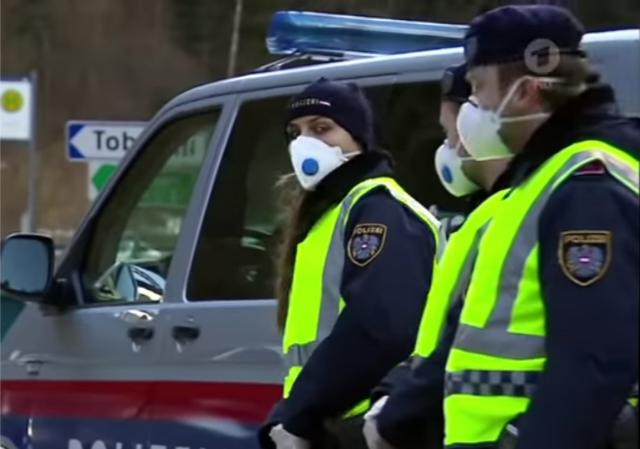 With Europe now officially the epicenter of the Coronavirus pandemic, Germany has announced its decision to close its borders with France, Austria, and Switzerland starting Monday, German news agency dpa reports. The German borders will remain closed barring some exceptions. Daily commuters and movement of goods have been exempted from the closure.

So far, Germany has suffered nine deaths due to the Coronavirus. It has over 4,500 active cases of the disease, data collected by Johns Hopkins University shows.

Southern Europe has been worst hit by the virus. The number of confirmed cases has crossed 21,000 in Italy, with more than 1,400 reported deaths nationwide. An estimated 6,300 people have been infected in Spain. The country reported over 100 new cases in last 24 hours. Similar numbers have been reported in France as well. Across the channel, Britain is in grip of the virus as well. Coronavirus cases in the UK crossed 1,372, with reported deaths reaching 34.

German newspaper Die Welt reported the closing of the border:

Germany is virtually closing its borders with France, Austria and Switzerland from Monday. [German press agency] dpa has learned this on Sunday from government sources. Earlier, the Bild newspaper reported the story. The partial closing of the borders will come into effect from 0800 hours on Monday. (…)

The movement of goods between Germany and its neighbors will continue, information [collected by] dpa says. Daily commuters will be allowed to pass through the border as well.

The reason [behind the move] is not only the containment of the Coronavirus, but also to prevent panic buying by foreigners, which created short-term supply problem, Bild also reported. [Translated by the author]

Given the nature of the infectious disease, most Germans might fall pry to the virus, Chancellor Angela Merkel admitted on Wednesday. “When the virus is out there, the population has no immunity and no therapy exists, then 60 to 70% of the population will be infected,” she said.

The move taken by Berlin also seeks discourage panic buying across the border. “A key ingredient for hand gels and alcohol wipes is in short supply in Europe, with prices for the chemical jumping sharply on the back of a surge in demand because of the coronavirus pandemic,” London-based Financial Times reported on Sunday.

With a migrant crisis unfolding at Greek-Turkish, Germany’s leading opposition party, Alternative for Germany (AfD), has been urging Chancellor Merkel for weeks to close the borders. Since late February, thousands of migrants, mostly young men from the Middle East, have been amassing the Greek border, trying to force their way into Europe. “In face of threat, good politicians my take responsible and timely decisions,” AfD’s foreign policy spokesman in the EU parliament, Lars Patrick Berg, said, citing immigration restrictions imposed by neighboring countries.

And *this* closes borders inside the EU….

Doesn’t really matter if they close internal borders. The “immigrants” are still pouring over the Turkish border by the thousands. They’ve got to go somewhere. Borders be damned.

sort of locking the door, after the horses are already racing through the countryside

germany needs to do much more, as in clean out all Islamic trash.

Merkel’s 60-70% percent infected is a bizarre number. Even on the Diamond Princess cruise ship less than a quarter of the people were infected.

Oh, gee… look at them now.
Well… too late.
The thing is they shoved their globalism onto everyone else.

I wonder; will this fiasco help break up the EU?

I wonder; will this fiasco help break up the EU?

Certainly won’t help keep it together. Especially when “60 tp 70%” (I predict a higher number) of the E.U. population becomes infected with Wuhan virus and begins the slow and quite painful trek to the grave.

If Trump had said what Merkle said in that presser he’d literally be skinned alive by the press. Pelosi and Schiff would be in show trial rehearsals with ‘whistleblower’ bureaucrats while their staff and media apparatchiks sharpen black cat bones chanting ‘nine billion dollars for the children.’

The latest and most persistent feint being that Trump lost precious response time because right wingers are anti-science anti-intellectual nosepickers…. this sort of rhetoric coming from “the science is settled” oracles, priests and ummah of the church of the climate change apocalypse.

Read the following out loud: “I am sofa king, wee Todd did.”

Another nail in the EU coffin.

Given the nature of the infectious disease, most Germans might fall pry to the virus, Chancellor Angela Merkel admitted on Wednesday. “When the virus is out there, the population has no immunity and no therapy exists, then 60 to 70% of the population will be infected,” she said.

But what Madame Merkel failed to mention was that “60-70% infection rate” only applies to the vulgar lower classes. And that she and the rest of the ruling elite will be well protected from the ravages of the coronavirus. Disgusting but true. It’s always the little people that suffer. The elite never do.

Really? How will they be protected?

Under the Schengen Agreement, Brussels promised to guard the outer frontiers of the EU, while abolishing internal border controls.

Merkel says 60-70%? This strikes me as a bit high by at least triple. It implies that Germans are packed together like sardines in a can.

The last thing a head of state needs to do is scream “We’re all gonna DIE” or something equally dismal. What is wrong with this woman?
.

Will CNN call them “racist” ?

If Germany closes its borders, who in the world will it import more jihadists?

Germany can’t close their borders, for any reason or none. That’s evil, racist, and just plain mean!