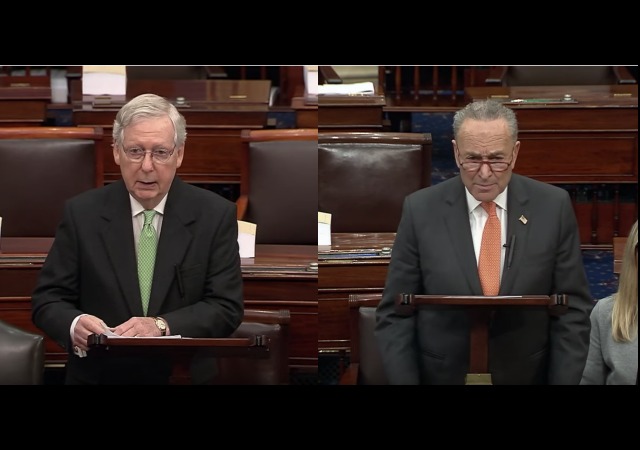 The latest Gallup poll shows that more Americans approve of Congressional Republicans over the Democrats.

Is this more proof that the impeachment circus blew up in the Democrats’ face? I wouldn’t fault you if you said yes.

After all, the impeachment stuff began in October and ended in January. President Donald Trump’s job approval rating went up during that time, too.

During that time, the Democrats’ approval rating went “down three points and disapproval has climbed five points, from 57% to 62%.”

Overall, the Republicans beat the Democrats 40% to 35%.

Republicans’ and Republican leaners’ more positive evaluations of their own party’s congressional caucus are the major reason Republicans in Congress receive higher ratings than Democrats in Congress overall. 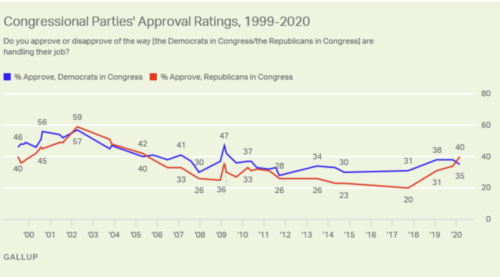 Gallup last took a favorability poll of Romney in February 2019. In that poll, 45% of Republicans favored Romney compared to 37% of Democrats. About 37% of adults, in general, favored him in that poll.

But a year later more Democrats favor Romney than Republicans.

Is anyone shocked by this news? Yeah, I’m not either. Romney was the only Republican who voted to convict President Donald Trump on one of the two articles of impeachment:

Although Romney’s 39% favorability among U.S. adults is unchanged from a year ago, he is currently viewed more favorably among Democrats than he is among Republicans, a reversal of previous readings. A 56% majority of Democrats but just 23% of Republicans now hold favorable views of Romney. Compared with Gallup’s prior reading of Romney in February 2019, his favorable rating is up 19 points among Democrats and down 22 points among Republicans. Romney’s decision last week to back the Republicans’ investigation of Hunter Biden’s actions in Ukraine could quickly temper Democrats’ opinion of him. 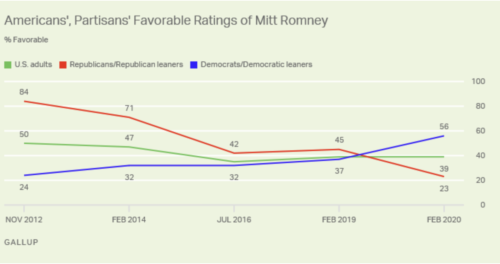 McConnell Goes Up, Pelosi Goes Down

McConnell also enjoyed a boost in his approval rating after impeachment while Speaker of the House Nancy Pelosi’s unfavorable rating went up:

McConnell’s favorability rating has increased by six points since October to 33% now, because of a 15-point jump to 62% among Republicans and Republican-leaning independents. There has been no meaningful change in McConnell’s unfavorable rating (48%) since October.

Although, on a relative basis, McConnell’s favorability is not particularly high, it is his highest rating since Gallup’s first reading in 2010, and it is well above his personal low of 18% in 2015, the year he became the majority leader.

House Speaker Nancy Pelosi’s 39% favorability is roughly the same as it was in October, but her unfavorable rating has climbed — from 50% in October to 55% now — and nearly matches her highest unfavorable of 56% that came just before the 2010 midterm elections in which Republicans regained control of the House. She receives a 71% favorable rating from her party’s base.

Gallup did not include Senate Minority Leader Chuck Schumer in its October 2019 poll. This latest poll found that his 31% favorable rating “is in line with all of Gallup’s readings for him since 2017.”

However, Schumer’s “46% unfavorable rating is his highest of five measurements (though similar to the 44% from June 2018).” 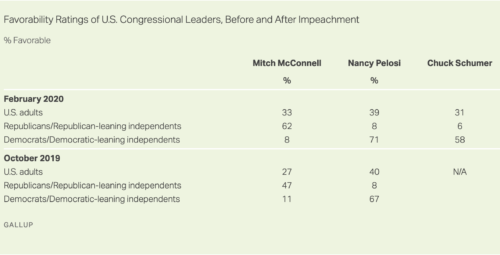 That reminds me. Complete media silence on Chuck you’s comments. Hows the dressing down going?

notamemberofanyorganizedpolicital in reply to 2smartforlibs. | March 10, 2020 at 5:14 pm

The Lyin’ Media Virus
with Media always lying to cover for Democrooks
must be why most Americans think President Trump and the Republicans are to be approved.

Remember all 12 months of 2019 the Do-Nothing Democrat House did not a lick of work.

Can’t we sue them for that year’s pay and all other money they got in connection with their positions – whether it’s from Russian Bribes or Chinese Bribes or….

Romney’s numbers are what I call ‘fake approval’.

They keep his poll numbers high but Democrats aren’t going to vote for him over an actual Democrat.

A mile wide and a quarter-inch deep. It seems impossible, but Romney managed to get his actual vote fraction down under twenty percent (i.e. if it came down to an actual election numbers, not just “Excuse me, may I ask you some questions” numbers)

Weazil Zippers and Ace of Spades

I’m going to guess the media will name this The Joe Biden Rally 2.0.

Why did it jump so much?

Well, probably partly due to people figuring out that the media is deliberately trying to cause a panic based on a virus that, while dangerous for some, is probably going to turn out to be the Y2K of pandemics.

But also partly due to Trump’s proposal of a payroll cut:

Democrats are playing a game of claiming that any downturn in the economy, even if caused by an epidemic which started in China and is ravaging the world, is the fault of the Bad Orange Man.

This is a political gambit to say, “Well, if you care about the economy, join me in strengthening it.”

The Dems are running out of give away stuff plays in the playbook. They are about down to the voter fraud hail mary play at this point.